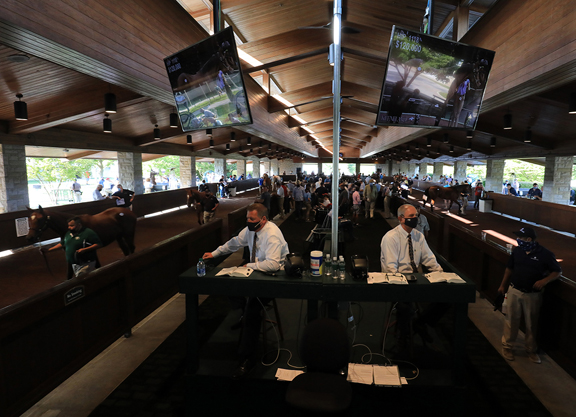 Business in the back ring | Keeneland photo

With a pandemic that's led to the loss of 200,000 lives, the loss of jobs, and overall economic instability that's affected most people except for the super wealthy that are heavily invested in the stock market, no one expected the Keeneland September yearling sale to be anything but down by gross and average versus last year. This was as predictable as saying that an egg dropped on concrete from six feet would break.

Two years prior to that, however, when the economy first showed signs of trouble, the gross of $385,110,600 and the average of $101,317 were down 4% and 10%, respectively, from 2006, suggesting that the declines this year could be a harbinger of worse to come if the economy doesn't rebound over the next few years. In other words, the first year of deep economic turmoil doesn't usually tell the whole story of what's about to unravel, and if we're already down a third by gross and about 20% by average now, what will happen next year and the year after if troubles continue? Those are sobering thoughts.

One other crinkle worth mentioning: every year from 2006 to 2019, 63% to 72% of the catalog has sold. This year, however, for the first time, the sale is on pace to see a transaction rate of less than 60% from horses catalogued, including “outs” and RNAs. Many of those that were outs or didn't make reserves were higher-priced horses, and their absence significantly impacted the gross. For example, if you add about 5% of the catalog back into the mix at an average price of $200,000 (and that's a low estimate considering the number of buybacks out of Book 1 alone), that's conservatively about $43,000,000 that could have raised the gross to $292,000,000. Under this scenario, the gross would have declined 22% instead of the projected 33%. Likewise, the average would have been about $117,000, or a decline of 7% instead of 20%.

Top of the Market

Keeneland's Director of Sales Operations Geoffrey Russell addressed this issue in TDN after Book 1 concluded, saying, “We are in that Book 1 market where people are willing to send horses to the racetrack. As we go through the sale, there are people who are commercial breeders with commercial crops who have to sell, so hopefully we see a change in that.”

What that translates to is that the people who sell at the top end of the market are more financially secure and can keep those horses they don't sell, but those below the top are less solvent and have to sell to generate cash flow, particularly in the bottom half of the market. The numbers bear this out. In Book 1, only 228 of 448 catalogued, or 51%, sold. In Book 5, in contrast, 500 of 792, or 63%, sold–a figure on the low end of historical trends but still within the parameters.

Therefore, as predictable as the declines were this year, it was just as predictable that the top of the market would be the least affected by the conditions. One reason, as noted earlier, is the strength of the stock market. Unlike other economic indicators, the stock market was near all-time highs through the first week of the two-week sale and is mostly in a bubble that's not representative of the general economic malaise that's plagued the rest of society. Those folks invested in it haven't lost money, and they spent commensurately at Keeneland at the top end. Last year, there were 22 lots that made $1 million or more, and this year the number was 15, though the group from a year ago brought significantly more in aggregate, headed by the $8.2 million American Pharoah filly from Leslie's Lady purchased by Mandy Pope. This year the top price was the $2 million Tapit colt from Tara's Tango purchased by the partnership of Eclipse, Robert LaPenta, Gainesway, and Ron Winchell. Eclipse, LaPenta, and Bridlewood had earlier been partners in the purchase of Tapwrit (Tapit) for $1.2 million at Fasig-Tipton in 2015. Gainesway and Pope later joined the group in the ownership of the colt that would win the Gl Belmont S. and is now at stud at Gainesway.

An increase in partnerships for stallion prospects has been a feature of select portions of yearling sales in recent years, fueling some of its growth, but it probably reached its apex this year. It had heated up particularly after the success of Justify, purchased for $500,000 at Keeneland in 2016 by WinStar, China Horse Club, and SF Bloodstock and later sold for big bucks to Coolmore. Justify was followed closely by a trio of successes for the reconstituted buying group of SF Bloodstock, Starlight, Madaket, and partners, self-dubbed “The Avengers,” whose scores include Grade l winner Eight Rings (Empire Maker), sold for stud to Coolmore; DQ'd Grade l winner Charlatan (Speightstown), sold to a syndicate headed by John Sikura at Hill 'n' Dale; and Grade l Kentucky Derby winner Authentic (Into Mischief), whose breeding rights were sold to Spendthrift. All three were purchased at Keeneland in 2018 and represented massive returns on investment like Justify.

The Avengers were back and bigger again this year, along with other groups following the same plan. The Jockey Club's 140-mare cap rule, which takes effect for horses foaled in 2020 or later, probably helped to fuel prices and prop the market even higher despite current economic conditions, because current yearlings were foaled in 2019 and will not be limited to the restriction should they make it to the breeding shed–meaning, that they have a chance to make more money at stud. Next year's sale featuring foals of 2020, however, will likely be dampened by the 140-mare restriction–an industry-made valve that will have the unintended consequence of closing off money flow for yearling colts during what could be another economically challenging year.

And if the stock market, which is highly volatile, does crash in the next year or two–remember that it was in 2009, two years after the economy started melting, that the Dow Jones bottomed–the industry could be in for even tougher times. It was after the 2007-2009 recession that foal crops settled at the 18,000-20,000 foals-per-year range, which was down from the 35,000 range before 2007. Further upheaval will drop crops down more, shrinking all aspects of the industry with it.

In March in this space, I wrote this about the last decade, when the stock market recovered and grew to new heights: “The sizes of annual foal crops, however, were completely unaffected by a rising stock market over this time span. This striking anomaly indicates that even in the best of times, the foal crop will not rise, but under adverse economic conditions, it falls significantly and will likely fall again if the market bottoms. This peculiar relationship of flat foal crops within a rising stock market also suggests that the top parts of the yearling market are healthy–mirroring society at large, where the wealthy keep getting a greater piece of the pie–and those participating in this sector are expanding their equine holdings as those at the bottom are being squeezed out, keeping foal production stable through a statistical sleight of hand.”

That is what it is.