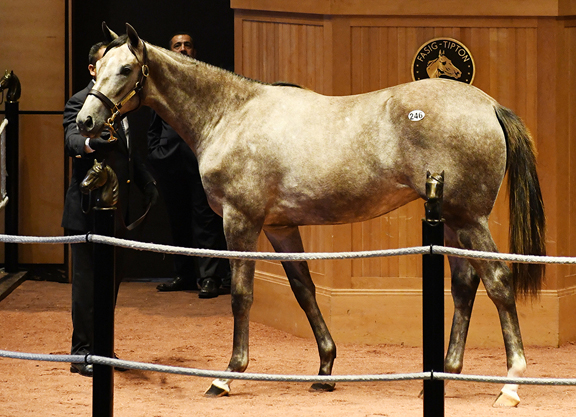 Fasig-Tipton's July Sale this past week once again highlighted the allure of yearlings by first-crop sires. In particular, Darley's duo of Frosted (Tapit) and Nyquist (Uncle Mo) had the sale's co-second-highest lots at $330,000 each, while the WinStar young guns Outwork (Uncle Mo) and Speightster (Speightstown) had the fourth- and fifth-highest sales at $300,000 and $285,000, respectively. Spendthrift's Brody's Cause (Giant's Causeway) had a $240,000 filly, Claiborne's Runhappy (Super Saver) had a $225,000 sale, and Taylor Made's Not This Time (Giant's Causeway) had a $200,000 colt in a sale where the average price was $92,183.

Although it's difficult to predict sire success, there's a reason why buyers wildcat new horses: first crops frequently tend to be the best crops by percentage of black-type winners to named foals. As a general rule, moreover, they are better than second crops.

Why? Because, more often than not, stallions tend to get their best mares in their first books, relative to stud fee. And if you subscribe to this theory, you understand that there are only a finite number of quality mares at each stud fee price point, and the new horses are getting the lion's share of them, leaving proven older horses with weaker overall books vis-à-vis the unproven at each level. Aside from the prepotency of some new sires, this can also explain the first-crop successes of such stallions as Medaglia d'Oro (Rachel Alexandra in first crop), Street Cry (Ire) (Zenyatta, Street Sense), and Uncle Mo (Nyquist), to name a few.

To illustrate this point, see the accompanying chart below, where the top 20 active leading sires of 2018 by earnings standing in North America are listed with their black-type winners and black-type percentages from named foals in their first two crops. Note that overall their later crops are not as strong as their first ones.

There are probably some legitimate explanations for the four with better performances in their second crops. Two of them, the A.P. Indy non-stakes-winners Malibu Moon and Flatter, had the least expensive initial fees from this group at $3,500 and $5,000, respectively, and there isn't a significant difference in the quality of mares in that price range to make a difference. Nevertheless, both horses had big-name backers behind them–B. Wayne Hughes for Malibu Moon and Claiborne for Flatter–and it's notable that Malibu Moon's third crop (13%) is his best to date while Flatter's second crop (13%) is his best.

Candy Ride entered stud for $10,000 at Hill 'n' Dale after a year away from the track and with an Argentine pedigree that would have given some breeders pause, and he was probably a harder sell his first year after he'd receded from memory than he was in his second, when he was active in the shed, was around to be viewed, and was once again remembered as a top-class horse. His second and ninth crops (both 9%) are his best to date.

Kitten's Joy, a turf champion for Ken and Sarah Ramsey at their Ramsey Farm, wasn't a commercial proposition when he initially entered stud. He was self-made by the owners, who bought and claimed mares for him. They probably bought better stock each subsequent year after the first, and they took advantage of various state breeding programs and found greater non-dirt opportunity during a time when synthetics and turf were on the rise to increase the horse's black-type chances. Kitten's Joy's fourth crop (16%) is his best to date, and he's now at Hill 'n' Dale under commercial management and yet may exceed his high-water mark.

The other 14 (with perhaps the exception of Congrats, who started off in Florida) were straightforward commercial horses at their respective fees. Stud farms recruit quantity, quality, and precocity for these types more vigorously than they do for older horses because the goal is to get young stallions off the mark as quickly as possible and hope they have a say in the major 3-year-old races. Stud managers know that a poor showing with their first 2-year-olds is a difficult hole for a young horse to dig out from, especially as every subsequent year will usually lead to lesser results until they become established enough to renew interest.

In fact, almost half (nine, or 45%) of these 20 stallions' first crops have been their best to date by percentage of black-type winners to named foals. This group includes Into Mischief, More Than Ready, Tapit, Empire Maker, Lookin At Lucky, Hard Spun, Uncle Mo, Congrats, and English Channel.

Another five (25%)–Quality Road, Malibu Moon, Street Sense, War Front, and Ghostzapper–have their third crops as their best to date. There is an explanation for this anomaly: by the second year at stud, first-crop foals are arriving, and by the third breeding season breeders have seen what a horse is throwing. Exceptional foals and weanlings will rekindle interest, and this, coupled with reduced fees that are common in the third year, can bolster a third book significantly enough to sometimes surpass the quality of a first book, especially in terms of physical matches. In fact, Curlin's third crop yielded a higher percentage of black-type winners than his first crop (11% vs. 9%) and he could have been included with this group except for the fact that his fifth crop tuned out to be his best, percentage-wise.

It's the rare stallion that can survive the first two or three crops without a high percentage of early black-type winners to foals and then emerge later as a major force, but Curlin is one such example. The celebrated Horse of the Year began his career at Lane's End in 2009 for a $75,000 fee a year or so after the global economic meltdown of 2007/2008 had devastated the bloodstock industry. His first crop raced in 2012 and his first 2-year-old winner appeared in, of all places, Russia–not a great harbinger for success. Because the early Curlins were mostly late developers, the stallion eventually ended up with nine black-type winners from his first crop (9%), but not before his fee had dropped to $25,000 by 2013, his fifth year at stud and his first season of 3-year-olds.

The foals conceived in that fifth year, when, along with the next year, his fee was at its lowest, ended up producing his best percentage (15%) to date, as noted earlier, although his third and fourth crops contained 11% and 10% black-type winners to named foals, respectively.

By June of 2013, Curlin's first-crop son Palace Malice had won the Gl Belmont S. This started a six-year streak through 2018 that saw Curlin sire either a winner or a placed horse in a U.S. Classic race, and Curlin's reputation as one of the best Classic sires in North America was firmly established. Relocated to Hill 'n' Dale for the 2016 breeding season after John Sikura and partner Craig Bernick's family purchased 20% of the horse, Curlin has ascended to elite status and stood this year for $175,000, fourth highest in North America, behind War Front, Tapit, and Medaglia d'Oro.