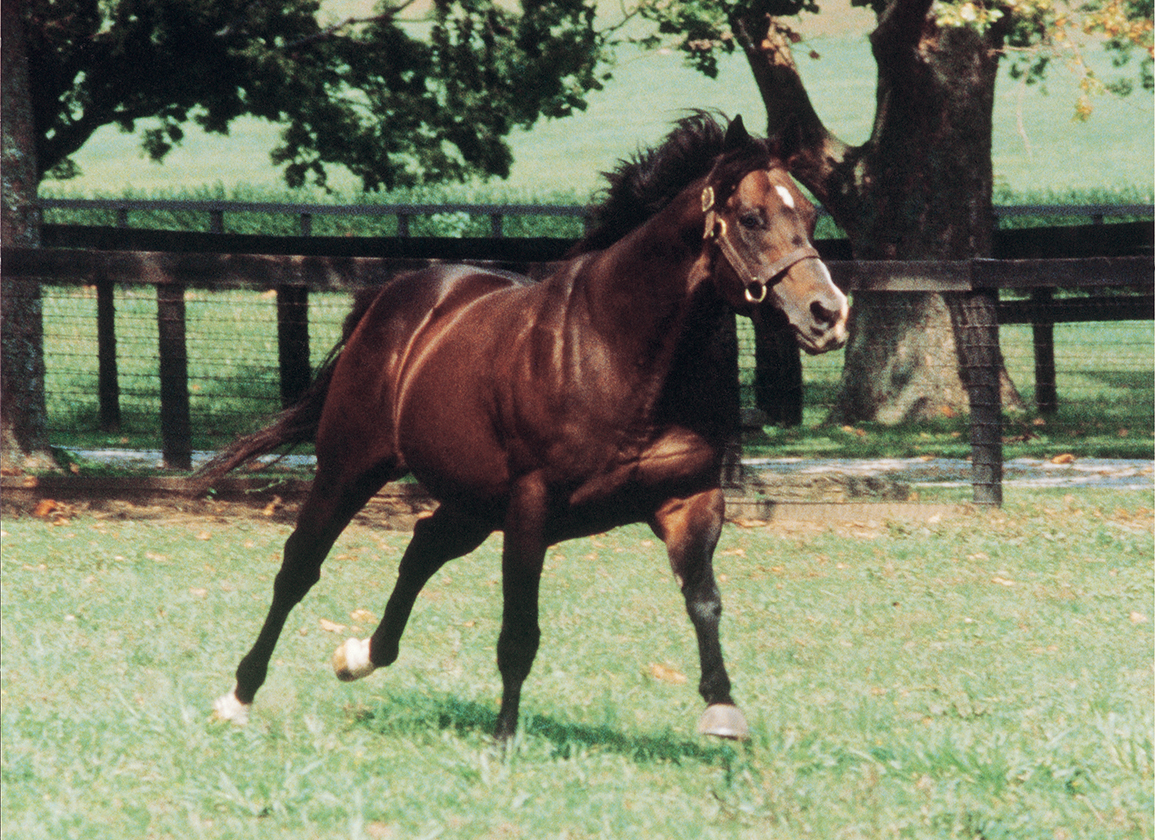 Claiborne's been running an eye-catching ad on its two young sires War of Will (War Front) and Silver State (Hard Spun) that ties them to their illustrious Claiborne-based grandsire Danzig, under the heading, “The Danzig Legacy continues at Claiborne.”

What really hits home about this ad is that Danzig's legacy in North America is now limited to two stallions, Claiborne's War Front and Darley's Hard Spun, and their sons. In contrast, Danzig is a massive sire-line influence in Europe and Australasia through many different strains, led by Danehill but also including Green Desert (Danzig), through such as Cape Cross (Ire) (Green Desert), Invincible Spirit (Ire) (Green Desert), Sea the Stars (Ire) (Cape Cross), Kingman (GB) (Invincible Spirit), etc.

Abroad, Danzig has also been equally as powerful as a broodmare sire line, again headed by Danehill, whose daughters have had terrific success with Galileo (Ire) (Sadler's Wells) and other sons of Sadler's Wells.

The outstanding example of this cross is Frankel (GB) (Galileo {Ire}), from the Danehill mare Kind (Ire). In fact, Galileo is the sire of 58 black-type winners from Danehill mares–an outstanding 18% black type winners to foals–and there are many others bred on this pattern when including granddaughters of Danehill or mares by other strains of Danzig.

It's common nowadays to find multiple crosses to Northern Dancer in pedigrees, and this is the case with both War of Will and Silver State. The former, who is out of a Sadler's Wells mare, has four strains (Danzig, Nijinsky, Sadler's Wells, and Northfields), while the latter has three (Danzig, El Gran Senor, and Dixieland Band).

Danzig is frequently the common thread in horses with multiple crosses to Northern Dancer, and that's probably because he injects more “trans-brilliant” speed–Franco Varola called that speed that blends with other aptitudes–than any other son of Northern Dancer. There are more than 1,000 Grade I/Group 1 winners that include Danzig with multiple strains of Northern Dancer in their pedigrees, and that about proves the point, doesn't it?

The puzzle, of course, is why Danzig, who started out with three Grade l winners in his first crop, including Gl Breeders' Cup Juvenile winner and champion 2-year-old colt Chief's Crown, and who led the general sire list in 1991, 1992 and 1993, never found the continuing sire-line success in North America that he's had overseas, until War Front and Hard Spun appeared late in his career.

And these two, as the Claiborne ad notes, could be the source for rejuvenating the legacy of their grandsire on this continent.

War Front is a foal of 2002 and Hard Spun was born two years later–the year Danzig was pensioned after covering mares that spring. Both went to stud after many other sons of Danzig had fired their best shots, and though several Danzig stallions had had intermittent success over here, none rose to the level of their foreign-based counterparts until these two arrived.

War Front, who was bred and raced by Joe Allen, has been an exceptional stallion in particular. Coolmore was quick to recognize his potential, and the Irish farm sent Galileo mares to him after the early success their star sire Galileo was enjoying with Danehill. This reverse cross of Danzig/Galileo through War Front is responsible for 11 black–type winners (11% from foals), including several Group 1 winners. Most of the success for this combination has come in Europe, where turf is the main racing surface, which the Danzigs reveled.

Early on, War Front was quickly labeled a high-class turf stallion, but just as his own sire succeeded on North American dirt, so too has War Front, when given opportunity.

A prime example is War of Will. Bred by European entity Flaxman Holdings, War of Will is from Visions of Clarity (Ire), a daughter of Sadler's Wells, and she descends from blue hen Broodmare of the Year Best in Show. On a surface reading of his pedigree, War of Will was destined for success on the turf. War Front has sired seven black=type winners from Sadler's Wells-line mares (21% to foals), and all seven were stakes winners on turf, and one of those–Gl Breeders' Cup Juvenile Turf winner Hit It a Bomb, at stud at Spendthrift–was a stakes winner on all-weather, too.

War of Will is the exception. Though he was Grade I-placed on turf at two, he won the Gl Preakness S. at three on dirt, and at four he won the Gl Maker's Mark Mile S. on turf. Altogether, he won five of 18 starts and earned $1.9 million, and his success in a Classic on dirt gives him all the credentials he needs to succeed in North America on dirt. The same could be said for War Front's high-class Spendthrift-based son Omaha Beach, who was also a dirt horse and a multiple Grade l winner.

Hard Spun is a very good and reliable stallion, standing for about a third of War Front's fee. He was also a better racehorse than War Front, and he's shown an ability to get quality dirt horses, such as Grade l winners Questing (GB) (a champion), Wicked Strong, Aloha West, Hard Aces, Spun to Run (at stud at Gainesway), Zo Impressive, Out for a Spin and Smooth Roller in addition to Silver State.

Silver State was bred by Stonestreet, one of the best breeders in Kentucky; raced by Winchell Thoroughbreds, in partnership with Willis Horton; and trained by Steve Asmussen. Winchell and Asmussen combined to race Gun Runner, and now they are behind the success of most of his 2-year-olds. Winchell is also behind Tapit. Stonestreet's list of sire successes begins with Curlin but also extends to several others, including Maclean's Music and Kantharos.

Silver State is from the black-type winner and Grade lll-placed Empire Maker mare Supreme from the immediate family of Gl Kentucky Derby winner Monarchos. He's a winner of seven of 14 starts and $1.9 million, including the Gl Metropolitan H., long considered a sire-making race.

Claiborne, therefore, has two Grade l dirt winners from the Danzig line, by Danzig's only two major sons currently at stud in North America, and both of them are highly credentialed.

This story was posted in Shared News and tagged Claiborne Farm, Danzig, Silver State, War of Will.