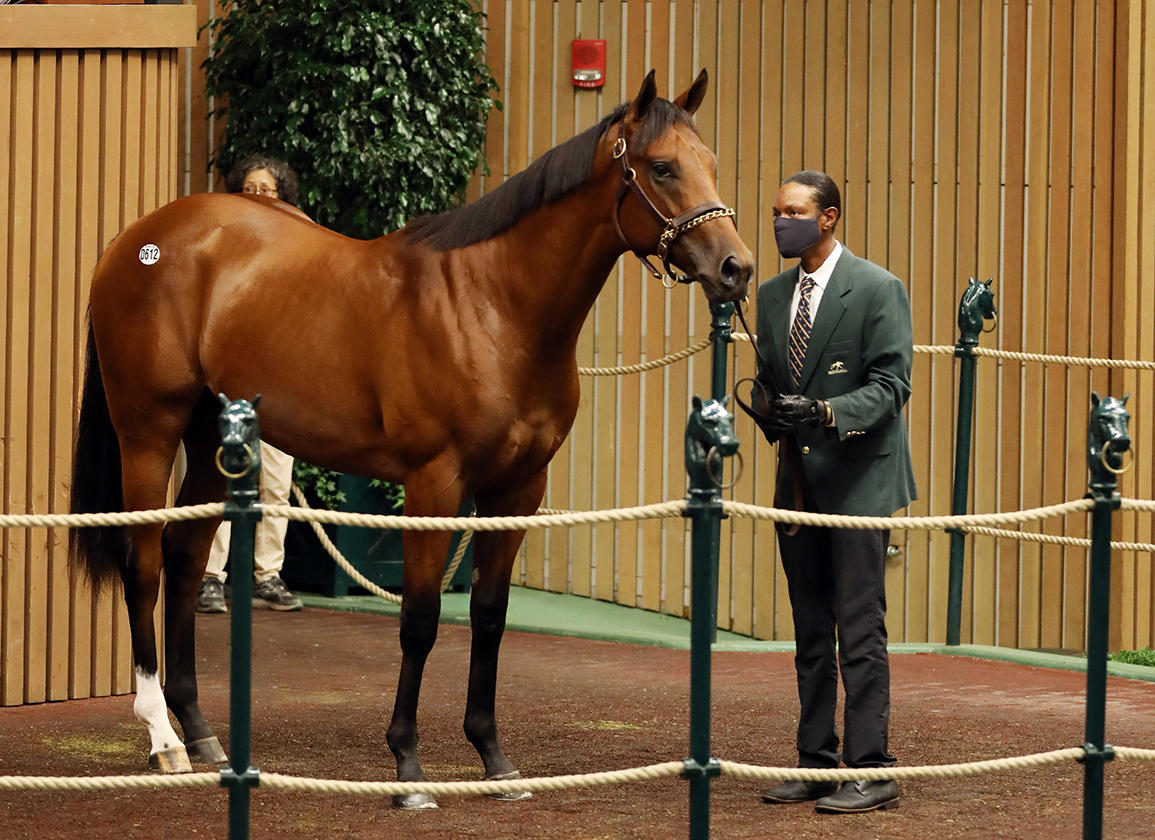 There are folks who sound like broken records when it comes to first-crop sires, complaining that breeders who use them and buyers purchasing those yearlings at auction are about as foolish as dunk-tank clowns. However, when one of those sires succeeds with his first 2-year-olds, those same people are usually the first to wax eloquent with platitudes, forgetting what they'd said earlier. That's human nature, I suppose.

What they forget is that all sires start out with first crops, and there are people on the other end that wildcat for next big sire–the next Into Mischief, Tapit, Curlin, Uncle Mo, Quality Road, etc. It's a given that most horses that enter stud will fail, but every year a few stars will appear to justify the process. This year, for example, Three Chimneys's Gun Runner (Candy Ride {Arg}) is on a tear with his first juveniles, with five black-type winners to date, including two at the highest level. In Europe over the weekend, Coolmore America's Caravaggio (Scat Daddy) and Overbury Stud's Ardad (Ire) (Kodiac {GB}) were represented by the winners of the G1 Cheveley Park S. and the G1 Middle Park S., respectively, from their first crops. There are too many current and historical examples of first-season success to list here, but it shouldn't surprise anyone that it happens, because these horses tend to get their best books of mares in their first years at stud, their own intrinsic abilities aside.

Sometimes, yearling sales will tip off future success. Gun Runner, a Horse of the Year who entered stud in 2018 for a $70,000 stud fee, led all first-season sires at Keeneland September in 2020 with an average price of $253,750 for 32 sold, and that was during the height of COVID, which depressed prices across the board. Because of his exceptional early success on the track, Gun Runner's second crop of yearlings benefitted, averaging $325,925 for 40 sold at Keeneland this year.

With COVID now somewhat under control, yearling prices soared across the board at Keeneland, which concluded last Friday, and the unequivocal star of first-crop sires was Lane's End's City of Light (Quality Road), with an average price of $372,872 for 47 sold–almost an average of $50,000 more than the Gun Runners. More germane, City of Light entered stud for $35,000 in the same year that Coolmore America's powerful Scat Daddy duo of Justify, a Triple Crown winner; and Mendelssohn, a half-brother to Into Mischief and champion Beholder, started out for fees of $150,000 and $35,000, respectively.

Moreover, a $1.7-million colt by City of Light topped the sale, and for good measure, he had another colt bring $1.05 million.

A $710,000 Keeneland September yearling bred by Ann Marie Farm, City of Light is an exceptionally attractive physical specimen, tall, athletic, and rangy, built very much like his sire, who also stands at Lane's End. When it was announced in late 2018 that City of Light would enter stud at Lane's End, the farm contacted me to write a piece about him for its website. I said this about his sire:

“The scope of Quality Road's success at stud has been astonishing, though not entirely surprising given his looks, race record, and pedigree. Bred and raced by the late Edward P. Evans, Quality Road is by Elusive Quality and is therefore a member of the Gone West branch of Mr. Prospector. On the bottom, he traces in tail-female to the highly influential mare Myrtlewood (seventh dam), from which Mr. Prospector (fourth dam) and Seattle Slew (fifth dam) also descended. Speed was the salient characteristic of these horses, and Quality Road expressed that trait by setting three track records, one at 6 1/2 furlongs and two at nine furlongs. He stayed 10 furlongs well enough when second in the GI Jockey Club Gold Cup, beaten a length. He is physically attractive, with height, length, and balance, and he was nimble, athletic, and notably fast for a 16.3-hand specimen. He reliably passes along his physical and aptitudinal traits to his offspring, who are effective from sprints to classic distances on dirt and turf at the highest levels, and as a sire, he has ascended to elite status in a short time.”

Todd Pletcher, who has had his hands on more top-class stallions than anyone else, guided the career of Quality Road after taking over from Jimmy Jerkens midway through the colt's 3-year-old season, and perhaps it's fitting that Pletcher's longtime assistant Michael McCarthy trained City of Light for owners Mr. and Mrs. William K. Warren, Jr.

City of Light was a top-class racehorse, winning six of 11 starts, and he was never off the board in his other five races, earning $5.7 million. Most notably, the colt won two Grade I sprints at Santa Anita over seven furlongs, the Malibu S. and the Triple Bend S.; the GI Breeders' Cup Dirt Mile at Churchill; and the GI Pegasus World Cup Invitational S. at Gulfstream over nine furlongs. In between, he'd also placed third in the GI Gold Cup at Santa Anita over 10 furlongs. By racing aptitude, he was also very much his father's son, and he was unlucky to never have won an Eclipse Award.

City of Light is from the Dehere mare Paris Notion and comes from a family developed by Ray Stark and Fares Farm that also includes Grade l winners Fabulous Notion (his second dam), Cacoethes, Subordination, and Careless Jewel.

With the physique, sire, race record, and female family behind him, it's no surprise he was a hit with breeders from the beginning. WTC bloodstock editor Frances J. Karon tweeted a photo of him at Lane's End in February of 2019 and wrote: “If you like Quality Road–and who doesn't?!–you will *love* his son City of Light, a real 'wow' horse.” And in another tweet on the same thread, she wrote: “City of Light won the GI Pegasus barely more than 30 days ago. Horses aren't supposed to look this phenomenal a month out of training, so that tells you a lot about this guy.”

Usually, a stallion's stud fee will decrease after his first few years at stud, but that wasn't the case with City of Light. In 2020, he went up $5,000 to $40,000–the same fee he was at this year. That's a testament to his popularity.

His first weanlings to sell confirmed this, with 20 selling in 2020 for an average price of $190,875. That was the clue that he was going to be a hit at the yearling sales this season.

So far, there haven't been too many Quality Road sons at stud, but one who is doing well this year with his first crop is Darby Dan's Klimt, a Grade l winner at two. Klimt is in a different price range–he's been at $10,000 all four years at stud–but he's sixth on TDN's first-crop list with progeny earnings of $620,916. Klimt has 12 winners, which makes him co-tied for fourth place in that category, and has three black-type-placed horses.

These are good signs for City of Light, and all eyes will be on him next year when his first runners hit the track.