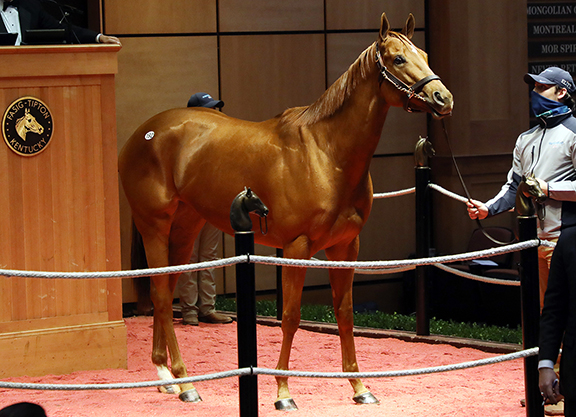 Champion fillies were rarely sold at public auction when owner/breeders dominated the sport for a good part of the last century. All of that changed from the 1980s onward when the industry became more commercialized and highly charged at the top end with international bidding wars for yearlings and breeding stock. Back then, folks like Robert Sangster and partners and Sheikh Mohammed and his brothers made the market, and in November of 1983–the same year that Sheikh Mohammed's Aston Upthorpe Stud outgunned Sangster at Keeneland July for the $10.2-million yearling Snaafi Dancer (Northern Dancer)–Sheikh Mohammed purchased 1981 champion 3-year-old filly Wayward Lass (Hail the Pirates) for $2.35 million at Keeneland, carrying her second foal (by Noble Nashua). In retrospect, that purchase signaled a shift in the industry.

In the decades since, numerous champion fillies and mares have changed hands at public auction, most recently Monomoy Girl (Tapizar), the Eclipse champion 3-year-old filly of 2018 and soon-to-be champion older mare of 2020, who sold to Spendthrift Farm for $9.5 million at Fasig-Tipton two weeks ago.

The Eclipse Awards were instituted 50 years ago in 1971. I took a look back at the produce records of every Eclipse Award-winning 3-year-old filly champion from Turkish Trousers (Bagdad) in 1971 to Untapable (Tapit) in 2014–the most recent to have a foal old enough to race. Click here for chart, which lists the number of foals of racing age for each mare next to the number of black-type winners produced. Of these black-type winners, I've listed where applicable the number of graded winners and Grade l winners for each mare. Serena's Song (Rahy), the champion 3-year-old filly of 1995, for example, produced 13 foals and six black-type winners. Of these six, four were graded winners, and one of those–Sophisticat (Storm Cat)–won at the highest level. Serena's Song, by the numbers, is to date the most successful producer of this group.

I've also listed in the chart those champions that were offered for sale at public auction within four years of their championships–a half interest in one, Mom's Command (Top Command), was sold privately–and you can come to your own conclusions about how these expensive fillies and mares fared at stud relative to their values.

Four champions–Banshee Breeze (Unbridled) died delivering what would have been her first foal; Go For Wand (Deputy Minister) died on track; Tempest Queen (Graustark) died of colic shortly after being bred for the first time; and Ruffian (Reviewer) died on track–didn't produce foals. The five most recent–Covfefe (Into Mischief) in 2019, Monomoy Girl, Abel Tasman (Quality Road) in 2017, Songbird (Medaglia d'Oro) in 2016, and Stellar Wind (Curlin) in 2015–don't have foals of racing age, though they'll be watched closely in the coming years as four of the five sold at public auction for big bucks. Monomoy Girl aside, Abel Tasman made $5 million at Keeneland January in 2019; Songbird sold for $9.5 million in 2017 at Fasig-Tipton November; and Stellar Wind was purchased for $6 million at Keeneland November in 2017.

Of the 40 remaining mares, they have altogether produced 354 foals to date, 33 (9.3%) of which were black-type winners. Of those 33, 17 were graded stakes winners. Seven of the 40 mares have produced a Grade l winner, but only one offered at auction–Sacahuista (Raja Baba), a $2.4 million RNA at Fasig-Tipton in 1988–has done so, so far. Eleven of 40 have produced at least one graded winner, but aside from, again, Sacahuista, Mom's Command was the only one from this group offered for sale or sold. It's also notable that Mom's Command's graded winner arrived late in her career and was by an unlikely sire at that.

Filtering these champion 3-year-old fillies over a 50-year span offers an interesting snapshot of how things have changed in the industry. For instance, in the 10 years from 1971 to 1980, seven champions were homebreds, and none of the 10 was sold after her racing career; over the past 10 years from 2010 to 2019, however, only three were homebreds, and six were sold after their championship sophomore seasons, for an aggregate of $41 million.

If that sounds like a lot of money, take a look at the inflation-adjusted dollars from the 1980s.

After Wayward Lass sold for $2.35 million in 1983, Life's Magic (Cox's Ridge) was the next 3-year-old filly champion to sell at public auction in 1986 for $5.4 million, in foal to Mr. Prospector. Adjusted for inflation, that amounts to $12.7 million today for Life's Magic and $6.2 million for Wayward Lass, for a combined $18.9 million. Neither Wayward Lass, who dropped 15 foals, nor Life's Magic, who had 14 foals, produced a black-type winner.

Mom's Command, the champion 3-year-old filly of 1985, represents something of a turning point in the historical transformation from breeding to race to breeding to sell. A rare winner of the Triple Crown for fillies in New York (later named the Triple Tiara), Mom's Command was bred and raced by New Englander Peter Fuller, a breeder who wouldn't have been expected to sell a homebred of the caliber of Mom's Command. However, he was offered a deal in 1985 that allowed him to hold on to half of his prized filly while capitalizing on the values being established for high-class bloodstock at the time.

One year before Life's Magic made $5.4 million in the ring, Richard Santulli, who breeds now as Colts Neck Stable, but at the time was one of the partners in Jayeff “B” Stable (named after its most famous partner, legendary gambler Jules Fink), privately purchased half the breeding rights of Mom's Command from Fuller for $2.5 million, giving Mom's Command a $5 million value at the time, or $12.2 million today.

Santulli is now an accomplished breeder and owner. Among other achievements, he raced champion and Hall of Famer Safely Kept (Horatius), had purchased an interest in 1998 3-year-old champion filly Banshee Breeze, bred Grade l Preakness winner Oxbow (Awesome Again), and sold Meydan City (Kingmambo) as a yearling in 2006 for $11.7 million.

The deal with Fuller called for Santulli to breed the first two foals from Mom's Command and then for the partners to alternate years. Mom's Command's first foal was an unraced Danzig filly that probably wasn't good enough to send through the ring as a yearling, but her second foal was the Mr. Prospector son Shakeel, who made $1.8 million at Keeneland July. He ended up earning $14,793.

Mom's Command was subsequently bred to stallions such as Alydar, Chief's Crown (twice), Dayjur, and Easy Goer (twice), but never managed to get a black-type winner and looked like she was heading the way of Wayward Lass and Life's Magic after producing 12 foals.

Now well past commercial viability in 2001, Santulli bred the then-19-year-old mare to Sefapiano (Fappiano), a winner of two of four starts with $37,793 in earnings. Santulli had co-bred Sefapiano with Farid Sefa, who'd subsequently made the horse into a sire sensation in Michigan, of all places. After that success, Sefa decided to roll the dice and send him to Kentucky. Santulli still had a minor interest in the stallion and took a shot with Mom's Command.

The result of that mating in 2002 was the subsequently named Jonesboro, a $27,000 Keeneland September yearling. Jonesboro went on to win the Gll Prairie Meadows Cornhusker H. and three Grade lll races. Altogether he won 14 of 50 starts and earned $1,550,685 and finally got Mom's Command off the black-type schneid. Amazingly, it took a little-known stallion to accomplish the job that some giants of the game hadn't been able to do.

There's probably a lesson somewhere in there.