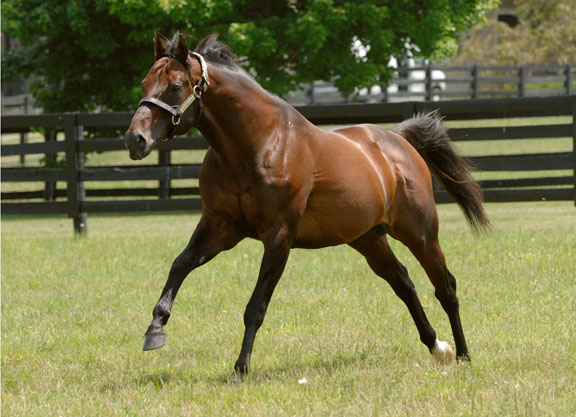 With the troubles at Santa Anita, the season debut of champion Game Winner (Candy Ride {Arg}) in the postponed Gll San Felipe S. was put on hold, but his sire is once again poised for another big year. Candy Ride (Ride the Rails), who stands at Lane's End for $80,000, was #2 on the General Sire List by worldwide earnings in 2018 and 2017, #6 in 2016, and #5 in 2015 and 2014, and this year Game Winner is among the early favorites for the Gl Kentucky Derby and heads a group of promising 3-year-olds for his Argentine-bred sire that also includes Saturday's Glll Honeybee S. winner at Oaklawn, Chocolate Kisses.

Stallions from South America haven't been particularly successful in North America, but Candy Ride, along with Forli (Arg) (Aristophanes {GB}) and Lord At War (Arg) (General {Fr}), is one of three notables that has been. It's a guessing game to figure out why some horses flourish while others flail, but high-class runners with foreign, off-the-beaten-path, or obscure sires and families can sometimes benefit by mixing with the richer pedigrees and prominent sire lines of a different locale, and this is the case with Candy Ride. He has made his mark with the assistance of the preeminent lines of Storm Cat, A.P. Indy, and Mr. Prospector, which have yielded some of his best runners, including champion juveniles Game Winner (A.P. Indy mare) and Shared Belief (Storm Cat), Horse of the Year Gun Runner (Giant's Causeway), and Grade l winner and proven young sire Twirling Candy (Chester House), who's also at Lane's End with his sire.

Once a “nick” appears, it tends to get repeated by breeders, and a stallion can have a long run of success if it's evident early. Candy Ride started his career at Hill 'n' Dale for $10,000 in 2005 and had three first-crop Grade l winners, two of which were from Storm Cat-line mares. So far there are 21 unrestricted black type winners bred on the Storm Cat cross, which is almost a quarter of the stallion's 83 black type winners to date, and five of his 14 Grade l winners are also from Storm Cat-line mares. With the A.P. Indy line, Candy Ride has 10 unrestricted black type winners, including undefeated Grade l winner Mastery–at stud at Claiborne–in addition to Game Winner.

It's generally accepted among pedigree analysts that inbreeding to Mr. Prospector through a branch of Fappiano (Mr. Prospector) is one of the best ways to go, and Candy Ride has proved that maxim with 20 unrestricted black type winners from a multitude of Mr. Prospector-line strains, including Grade l winners Ascend (Silver Ghost), Twirling Candy, Separationofpowers (Empire Maker), and Leofric (Unbridled's Song).

Candy Ride traces to Fappiano through a far less-travelled path than Unbridled (Fappiano) and his sons Unbridled's Song and Empire Maker. Ride the Rails was by the Fappiano horse Cryptoclearance, a top runner and a decent stallion but not one with lasting influence in tail-male, except for Candy Ride. It's worth noting that Candy Ride is mixing well with the two prominent Fappiano branches of Empire Maker and Unbridled's Song, and altogether there are nine Candy Ride black type winners, including Gun Runner, inbred to Fappiano.

More notably, the lines of Storm Cat, A.P. Indy, and Mr. Prospector in total have yielded 51 (61%) of Candy Ride's black type winners and 11 of his 14 Grade l winners. Conspicuously missing, obviously, are the Northern Dancer lines separate of Storm Cat, and Candy Ride has only one graded winner, Unified (Dixie Union), bred this way. Unified, like Twirling Candy, is also at stud at Lane's End.

Note that these recent 3-year-old winners were all bred from either Storm Cat, A.P. Indy, or Mr. Prospector-line mares and weren't particularly expensive sales horses, either. Game Winner, in retrospect, was a bargain at $110,000 on the second day at Keeneland, where Ben Glass, agent for Gary and Mary West, bought him; his vet passed the colt while those for a lot of other potential buyers didn't. The same was probably true for several of the others listed above, including the bargain basement $15,000 2-year-old Pyron.

Candy Ride twice failed the vet himself as a yearling before he was sold by his breeder to owner Gumercindo Alonzo for the equivalent of $12,000. His veterinary issues didn't stop him from becoming a brilliant racehorse in Argentina, where he won all three of his races by wide margins and accounted for two Group 1 wins, including the prestigious Joaquin S. de Anchorena, a 1600-meter turf race at San Isidro that he won in 1:31.01. Off this form, Alonzo sold Candy Ride to Sid and Jenny Craig for a reported $900,000.

For the Craigs and trainer Ron McAnally, who'd had prior success from Argentina together with Grade l winners Paseana (Arg) (Ahmad {Arg}) and Different (Arg) (Candy Stripes), Candy Ride won another three races in the United States, led by the Gl Pacific Classic at Del Mar over Medaglia d'Oro in track-record time of 1:59.11. Feet and ankle issues finally ended his career and he went to stud at Hill 'n' Dale, where he remained until he was moved to Lane's End for the 2010 breeding season.

Candy Ride, like Different, was bred by Alejandro and Julio Menditeguy's Haras Abolengo. The Menditeguy family has deep roots in Argentina's breeding community. The patriarch, Julio Menditeguy (grandfather of Alejandro and Julio), established Haras El Turf–home of top sire Pronto, among others–in 1908, and upon his death in 1930, the farm passed to his sons Julio and Charly. The latter's family still runs El Turf, but the former's family established Abolengo in 1966 and today the farm is run by yet another Julio Menditeguy–the patriarch's great-grandson.

I visited Abolengo several times during the early 1990s when Alejandro Menditeguy–the current owner's uncle–was at the helm, and he ran the farm in the typical South American fashion of breeding the daughters of one established farm stallion to the new horse in residence. This is illustrative of how nicks were originally developed, and the concept was practiced in this country, too, years ago, when more big-time owner-breeders populated the sport than now. The Bold Ruler/Princequillo cross at Claiborne that was responsible for Secretariat is an example of a nick that succeeded this way, while the Buckpasser/Bold Ruler cross at the same farm is an example of a “negative nick.” It produced only one top runner, 1000 Guineas winner Quick as Lightning.

When Abolengo started off Ride the Rails at stud, the farm already had daughters of its Blushing Groom horse Candy Stripes at the ready, and Candy Ride is out of one them, Candy Girl (Arg)–an unraced sister to the top Abolengo-bred colt City West (Arg), winner of the G1 Argentine Guineas and Derby equivalents.

Improbably, the product of this mating is now one of the best stallions at stud in North America.