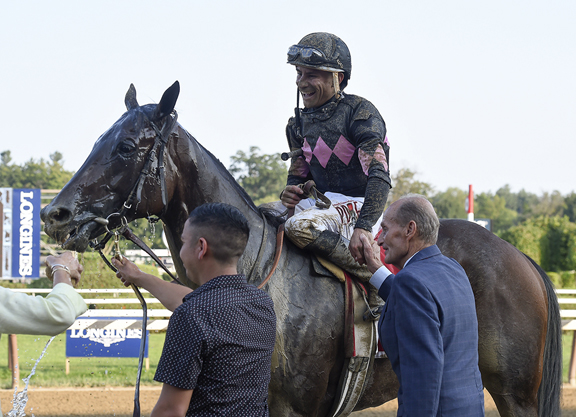 “Back in the early 1970s, you'd see horses bleeding from the nostrils more commonly than you do now,” said trainer Barclay Tagg, who took out his license in 1971. “I had a horse back then that came back after a race, and he was being washed up and suddenly he starts gushing blood from the nostrils. You barely see them bleed from the nostrils now, and that's because of Lasix.” Tagg said he was a proponent for the use of the diuretic Lasix to combat exercise-induced pulmonary hemorrhage, or EIPH, a condition that results in bleeding in the lungs from exercise and racing. Its extreme manifestation is epistaxis, or bleeding through the nostrils, and this condition has existed for as long as Thoroughbred history has been recorded over the last 300-plus years. That's a point that gets forgotten when partisans debate Lasix usage.

Lasix officially entered the racing landscape in Maryland in the mid-1970s as a therapeutic treatment to reduce the effects of EIPH and is now used almost exclusively on most racehorses in this country on race days, though race-day Lasix is prohibited abroad. As a diuretic, Lasix lowers blood pressure, and this is thought to mitigate bleeding by relieving pressure on capillaries in the lungs that burst during stress. It was known and used by some trainers at least a decade before it was officially sanctioned, and Northern Dancer was reportedly administered the drug by Dr. Alex Harthill for the 1964 Kentucky Derby. “I was good friends with Dr. Harthill, and I can confirm that. He told me personally that he gave it to Northern Dancer,” Tagg said.

Lasix usage has been controversial for a long time and is even more so nowadays with the mainstream publicity surrounding the fatalities at Santa Anita, which have somehow been publicly linked to the drug–without the evidence of science. For example, one of the first reforms instituted during the eye of the storm by The Stronach Group (TSG), owner of Santa Anita, was a reduction in the race-day dosage of Lasix, which had the effect of implying to the public that larger doses may have played a part in the breakdowns. Joe Drape in the New York Times was more direct, writing: “[Lasix] is also thought to increase the chance of catastrophic injury to a horse's thin legs.”

I've read as many legitimate peer-reviewed scientific papers and studies on Lasix dating back to the 1980s as anyone else, and I've yet to come across one that states what Drape did, in one of the most prestigious newspapers in the country no less. TSG's stance on Lasix is more understandable as a reflexive PR maneuver and a deflection from its racing surface, especially as a Jockey Club-led medication reform federal bill that would ban race-day Lasix was introduced in Congress during this period of tumult at Santa Anita. All of this has unfortunately fudged the lines between cause and effect for legislators like Senator Dianne Feinstein, who has called for a suspension of racing at Santa Anita and a review of medication policies, and journalists like Drape and others reporting on the deaths in mainstream media.

Aside from the black eye of the current fatalities at Santa Anita, racing's image hasn't been helped over the last five or so years by partisan debates over earlier versions of the current bill in Congress. A lot of the damage is specifically from the chorus of some of the bill's supporters in the media equating Lasix with illegal “drugging” despite that Lasix is legal and sanctioned by every racing jurisdiction in this country. This confusion has only added to governmental and public perception outside racing circles that the sport and industry is riddled with chronic drug and animal abuse, and it's brought to the fore groups like the People for the Ethical Treatment of Animals (PETA), which was– surprisingly–invited by TSG to the Santa Anita discussions. PETA is now calling for the suspension of racing nationwide until reforms like those instituted at Santa Anita are applied to all tracks in the country, even though the reforms at Santa Anita haven't completely stopped the fatalities.

The net effect is that the industry is under siege from the outside, and within it there's a chasm between a cadre of wealthy owners and breeders who are against the use of race-day Lasix and who back The Jockey Club's federal initiative, and trainers and smaller owners on the other side who don't support the proposed legislation. “Sure, I'd be for getting rid of Lasix,” Tagg said, “if they found another way to treat bleeders that works. Lasix, if used properly, is not as debilitating as people think, either. If they are treated right the next few days after a race and get plenty of fresh water, an electrolyte jug the day after, and get some grazing, they rebound quickly.”

Deconstructing this entanglement the industry finds itself in first and foremost requires admitting publicly that EIPH is a real disorder and needs to be addressed and treated one way or another if race-day Lasix is ultimately held as the scapegoat for industry ills and is banned.

“Before Lasix, horses were taken off water and food 12 to 24 hours before races,” Tagg said. “You'd feel bad for the poor horses.” Dehydrating them in this manner had the effect of lowering blood pressure, but not as effectively or as humanely as Lasix does. “There was other stuff people would give them, too. Everyone had their potions,” Tagg said, implying that water, hay, and oats alone is a quaint notion.

Dallas Stewart came up as a trainer during the Lasix era and said it's the most inexpensive and efficient way to treat EIPH. “Sure, there are guys that will give them a bunch of stuff, but that's expensive versus a $20 or $25 shot of Lasix,” he noted. The cost of treating a bleeder for a small owner or trainer would skyrocket without Lasix, and this is another line of demarcation between the two warring sides.

And one other thought that no one seems to have addressed while pinning the tail on the donkey that is Lasix: if the diuretic leads to “catastrophic injuries,” as Drape wrote, why would it still be allowed for training? Most bleeders use Lasix far more often in morning workouts than they do in the afternoons. A horse that made 15 lifetime starts on Lasix, for example, might have used it five times as much while training in between starts.

EIPH and the Breed…

Depending on the study, it's estimated that between 55% to 95% of racehorses experience some level of EIPH, though between only 1% (lower in some studies) to 4% exhibit epistaxis. Bleeding through the nostrils was the obvious indicator of EIPH until the development of the endoscope and bronchoalveolar lavage (BAL) allowed for the detection of various levels of blood in the lungs and trachea. Most studies indicate that EIPH becomes more prevalent and acute with age and racing mileage, and one study has suggested that EIPH is heritable and that bleeders should be removed from the breeding population, something that's been put into practice in Germany, where horses that raced on Lasix are not approved as breeding stock.

One thing is for certain, though: bleeders have been around since the beginning, and many bleeders or descendants of bleeders have had a profound impact on the breed. Bartlett's Childers (1716), a son of the Darley Arabian–one of the three founding stallions of the Thoroughbred, along with The Byerley Turk and the Godolphin Arabian–was unraced because he was a bleeder (he was also known as Bleeding Childers) but nonetheless became a champion sire and was the great-grandsire of the top racehorse and pivotal stallion Eclipse (1764), to whom most racehorses now trace.

Herod (1758) was a contemporary of Eclipse and a descendant of The Byerley Turk. He, too, has been recorded as a bad bleeder–and keep in mind that these horses were known as bleeders only because they exhibited epistaxis. Herod led the sire list for eight consecutive years, and his son Highflyer led the list 13 times. Today this line is all but extinct but has some representation in modern pedigrees primarily through Ahonoora (1975).

Hermit (1864), a male-line descendant of Eclipse, was another well-known bleeder. He won the Epsom Derby and led the British sire list seven years straight. One of his daughters produced Gallinule (1884), a stakes-winning 2-year-old colt whose subsequent career was marred by EIPH. He led the British sire list in 1904 and sired the outstanding filly Pretty Polly (1901), who founded an influential family whose impact is still felt today.

There are far too many cases of these types to list here, but here's one more, a contemporary example. Claiborne's Special (1969) was a talented filly who was unable to race because she was prone to bleeding. Retained as a broodmare, she produced champions Fairy Bridge (1975) and Nureyev (1977), who between them made a total of five starts. Nureyev, a son of Northern Dancer, became an outstanding sire, and Fairy Bridge produced the top racehorse and iconic sire Sadler's Wells (1981), also a son of Northern Dancer. Sadler's Wells is, of course, the sire of Galileo (1998), one of the all-time greats.