Take, Do Deuce Hold All The Aces in Japanese Derby 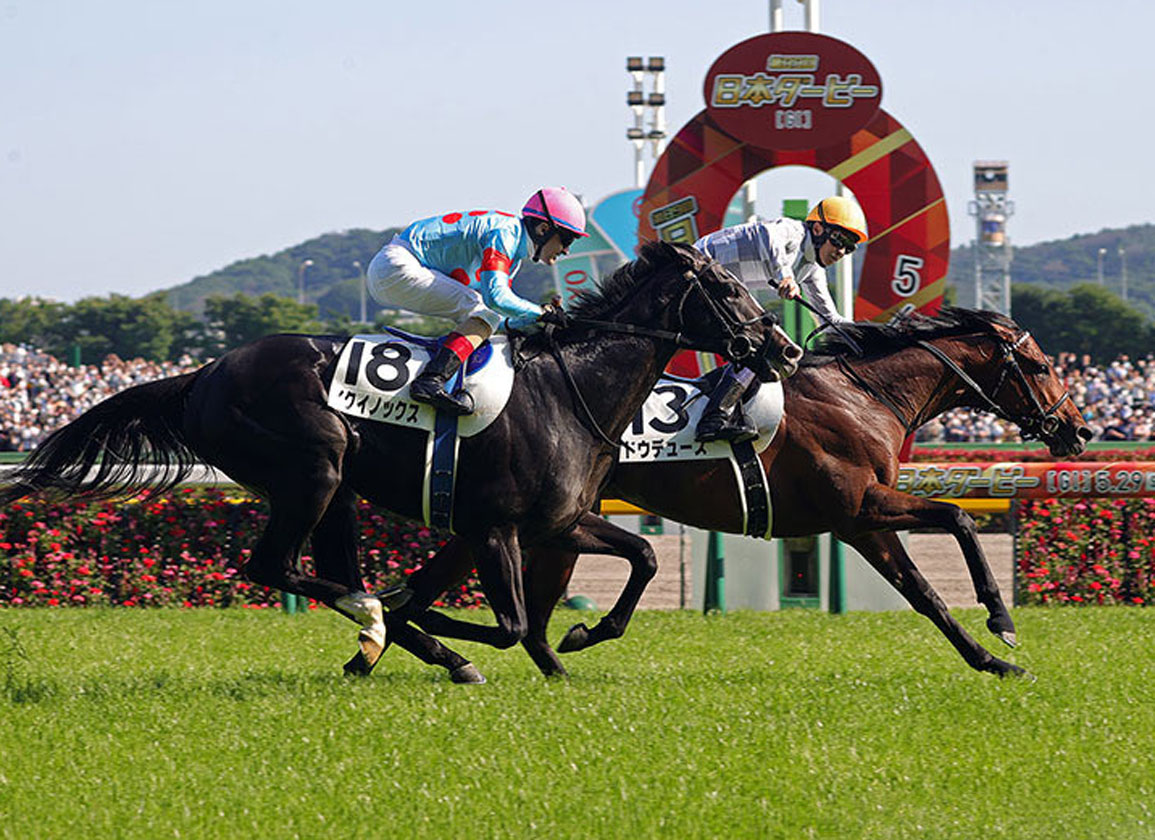 The legendary Yutaka Take, already five times a winner of the G1 Tokyo Yushun (Japanese Derby), gave out an uncharacteristically bullish vibe about the chances of reigning champion 2-year-old male Do Deuce (Jpn) (Heart's Cry {Jpn}) ahead of Sunday's second jewel of the Japanese Triple Crown over 2400 metres of the Fuchu course, about 20 miles due west of the city centre.

And after a little less than a record-breaking 142 seconds on a warm and sunny warm afternoon and with a crowd on that looked and sounded a bit larger than the announced 62,364, the son of US import Dust and Diamonds (Vindication) kicked home down the centre of the track and found the line a neck better than an unlucky Equinox (Jpn) (Kitasan Black {Jpn}). Ask Victor More (Jpn) (Deep Impact {Jpn}), one of five in the race for the final intake of the 2005 Derby winner–also ridden by Take–was a forward factor throughout and clung on gamely for third.

“This is a truly emotional experience for me and I couldn't be happier,” said Take, 53, who can now boast of Derby victories in his 20s, 30s, 40s and 50s. “It's so wonderful to be able to win in front of a packed stand–you couldn't be a jockey and not dream of living this moment.”

Sent away as the 16-5 third choice exiting a wide-trip third behind Geoglyph (Jpn) (Drefong) and Equinox in the G1 Satsuki Sho (Japanese 2000 Guineas) at Nakayama last month, last year's G1 Asahi Hai Futurity hero was away fairly from gate 13 and drifted back to settle in the latter third of the field, racing with Equinox in his wake, as Desierto (Jpn) (Drefong) cut out the running from Ask Victor More. Switched off nicely and unhurried entering the final half-mile, Do Deuce stalked Geoglyph into the final 600 metres and was pulled out and around that star-faced chestnut rival entering the long Tokyo straight.

Desierto hoisted the white flag not long thereafter, allowing Ask Victor More to inherit the lead, but Take had Do Deuce in high gear, raced up to the front-runner inside the furlong marker and held sway late to score narrowly. Equinox, who drew 18 in the Guineas was unfortunate to do so again Sunday afternoon, was beaten to the punch by the winner and was fractionally short of room in the waning stages before attacking the line for second. His final 600 metres was timed in a race-fastest :33.6, a tenth of a second quicker than the winner. Favored Danon Beluga (Jpn) (Heart's Cry {Jpn}) ran on for fourth.

“He had so much left in the tank at the final corner when I asked him for his run–he responded amazingly and took the lead earlier than planned, but held on well to the wire,” Take added. “The [G1] Prix de l'Arc de Triomphe should be a strong option for the owner and will probably be our next target.”

Do Deuce is one of 11 top-level scores for the now-pensioned Heart's Cry, who famously defeated Deep Impact in the 2005 G1 Arima Kinen and gave Japan a notable victory on the world stage when carrying Christophe Lemaire to a barnstorming victory in the G1 Dubai Sheema Classic at old Nad al Sheba in 2006. Do Deuce is the second Derby winner for Heart's Cry, who also supplied One and Only (Jpn) in 2014. Heart's Cry is also responsible for dual-surface Grade I winner Yoshida (Jpn), now standing at WinStar Farm in the US.

The winner's dam raced as a homebred for Satish Sanan's Padua Stables for the first 10 starts of her career, winning the GII Gallant Bloom H. for trainer Steve Asmussen in 2012 before finishing a clear second in the GI Breeders' Cup Filly and Mare Sprint with Richard Santulli part of the ownership group.

Sent through the Fasig-Tipton November Sale a few days later, Dust and Diamonds was purchased by Borges Torrealba Holdings for $900,000 and was turned over to trainer Todd Pletcher for whom she won the GIII Sugar Swirl S. in what would be her final racetrack appearance.

Of the three foals the mare produced for Torrealba/Three Chimneys, the most accomplished became Much Better, who went on to be placed twice in graded company. Dust and Diamonds was subsequently sold to Katsumi Yoshida for $1 million carrying a full-sibling to Much Better at the 2016 Keeneland November Sale.

Now 14 years of age, Dust and Diamonds is represented by a 2-year-old Lord Kanaloa (Jpn) filly and was most recently covered by Real Steel (Jpn), the full-brother to the ground-breaking GI Breeders' Cup Filly & Mare Turf heroine Loves Only You (Jpn).

$1 million for Hip 175, Dust and Diamonds (in foal to Pioneerof the Nile) at #KeeNov from the @Three_Chimneys consignment pic.twitter.com/hs7Y7WpF4P