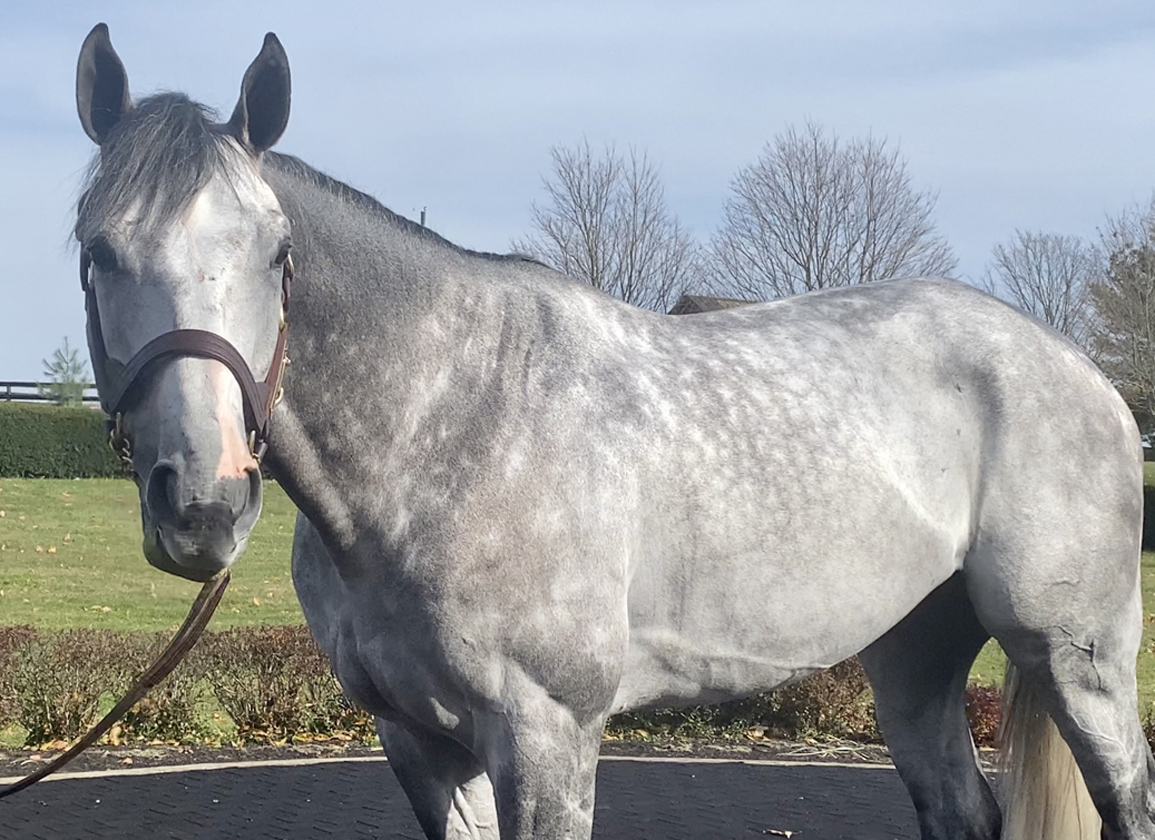 Beginning his stud career at Taylor Made Stallions with a $10,000 initial fee, Tacitus (Tapit -Close Hatches, by First Defence) earned medalist status on Chris McGrath's 'Value Podium' of new stallions in 2022. Now, with the breeding shed door opening soon, the blue-blooded multi-millionaire has seen an enthusiastic response from breeders and has amassed a solid first book of mares.

“He is booked to over 160 mares now,” reported Taylor Made's Duncan Taylor. “We've been really satisfied with the reception from breeders. We're not taking every mare he gets offered. We're picking through and trying to get the best mares we can. We probably could have stood him for more money because he has been so popular, but we wanted to make sure we got a good book to him to get him off to a good start.”

Hailing from a highly-successful Juddmonte family, the son of champion sire Tapit is the first foal out of Champion Older Mare and five-time Grade I winner Close Hatches (First Defence). The mare descends from blue hen Best in Show (Traffic Judge) and is from the same family as G1 Irish 2000 Guineas winner Siskin, a young sire in Japan who is also by First Defence.

Taylor gives high regard to the line breeding traced in Tacitus's pedigree through First Defence, a grandson of Unbridled out of a Seattle Slew mare, and Tapit, a member of the Seattle Slew sire line out of an Unbridled mare.

“I really like the way he's bred with the Unbridled and Seattle Slew line breeding,” he explained. “They're both through a male and a female, so it's a very well-balanced pedigree. Then the females in his family are unbelievable. You have Weekend Surprise, Narrate, Gana Facil, Crimson Saint and Best in Show. When you look for what I call a blue-blood Kentucky pedigree, this one hits the bullseye.”

“There's a lot of things you can line breed to with him and try to come up with some clever matings,” he said, adding that the new stallion's first book is replete with mares by the sire lines of Candy Ride, Arch, Indian Charlie and War Front.

One of two graded stakes-winning grays joining the Taylor Made roster this year along with champion Knicks Go (Paynter), Tacitus may share the coloring of his sire, but Taylor said his physical better reflects his female line.

“He's bigger [than his sire] and you can really see the Unbridled coming through,” Taylor said. “He has a big, deep shoulder and a good neck on him.”

Campaigned by Juddmonte and trained throughout his career by Bill Mott, Tacitus was a top contender on the Triple Crown trail. After breaking his maiden as a juvenile, he claimed consecutive victories in the GII Tampa Bay Derby, where he set a stakes record, and the GII Wood Memorial S.

The colt did not see the winner's circle again as a sophomore, but ran in the money in each of his next five starts in 2019, placing second in the GI Belmont S., GII Jim Dandy S. and GI Runhappy Travers S., and finishing third in the GI Kentucky Derby and GI Jockey Club Gold Cup S.

“He was right there through the major 3-year-old races,” Taylor said. “[To finish] third in the Kentucky Derby was a real credit and then he came back and ran well in the Travers. While he never got the Grade I win, he was a Grade I-caliber horse. I think just pure ability made him as good as he was.”

Tacitus was competitive again as a 4-year-old, gaining a third graded-stakes score with an 8 3/4-length romp in the GII Suburban S. at Belmont and later placing in the GI Woodward H. and GI Jockey Club Gold Cup S.

He retired after his 5-year-old season with earnings of over $3.7 million, competing exclusively against graded stakes company after breaking his maiden and running in the money in all but five of those 15 graded starts.

“Tacitus was such a good racehorse,” Taylor said. “He won the Wood Memorial, the Tampa Bay Derby and the Suburban. Two of those used to be Grade I races so he just didn't win them at the right time. He has a beautiful pedigree and we think he could be a great stallion. We're very fortunate to have a royally-bred horse like him at Taylor Made.”