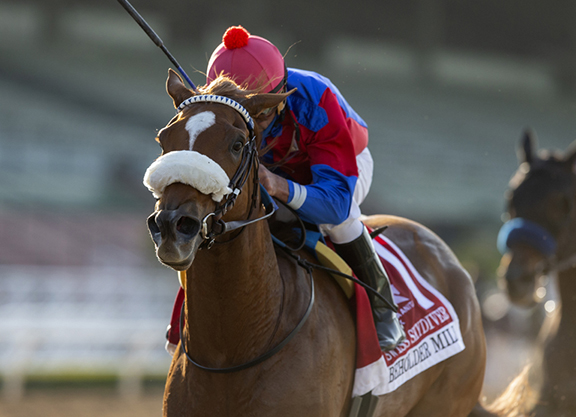 After a disappointing effort when last seen in the Nov. 7 GI Breeders' Cup Distaff, Swiss Skydiver (Daredevil)returned to the brilliant form that earned her an Eclipse Award last season with a good-looking score in her seasonal bow Saturday at Santa Anita in the GI Beholder Mile. It was her second win from as many starts in Arcadia, having captured last term's GII Santa Anita Oaks.

Away in good order from her rail draw, the 7-5 chalk secured a comfortable position ina ground-saving fourth as Golden Principal (Constitution) hustled up to take control with Harvest Moon (Uncle Mo) keeping her honest in second through a :23.14 opening quarter. Inching up inside of Harvest Moon as the half-mile went in :46.80, the chestnut patiently awaited racing room on the backstretch run and split the top two to make a race of it turning for home. Pouncing on Golden Principal in early stretch, Swiss Skydiver “waved goodbye,” as announcer Frank Mirahmadi said, powering clear under a hand ride from Robby Albarado to win as she pleased by 2 3/4 lengths. The regally bred As Time Goes By (American Pharoah–Take Charge Lady) took the overland route to be second and her pacesetting stablemate Golden Principal held third.

“Pretty much up the backside, every point I felt like she was right there with me the whole way,” Albarado said. “She was taking deep breaths around there. When I finally gave her some room there she took off. It was all her, I was just a passenger…I look forward for the rest of the year with her.”
“Yes, she met expectations, but you never know,” said trainer Ken McPeek, who has been at Santa Anita since Swiss Skydiver shipped in from her Gulfstream Park base Tuesday. “The distance for me was a little bit of a worry because of the run to the first turn. But Robby does know her so well, to get her in :12s, just get her into a nice rhythm and let her make her run. You can't force anything with her, and if you go too fast early, she will wilt a little bit.”

Swiss Skydiver's won five of her 10 starts in her Eclipse-winning sophomore season, all at different racetracks. Her first victory of the season came in the GII Gulfstream Park Oaks last March and followed suit with a win in Oaklawn's GIII Fantasy S. in May. Wiring the Santa Anita Oaks last June, the $35,000 KEESEP buy took on males for the first time in the GII Toyota Blue Grass S. in July and finished a respectable second to Art Collector (Bernardini).

Cruising home to a clear-cut victory in Saratoga's prestigious GI Alabama S. last August, Swiss Skydiver checked in second to Shedaresthedevil (Daredevil) in the GI Kentucky Oaks Sept. 4. Trainer Kenny McPeek was confident enough to send his star filly on to the GI Preakness S. Oct. 3 and she rewarded his and owner Peter Callahan's faith with a gritty score of GI Kentucky Derby winner and now Horse of the Year Authentic (Into Mischief). Installed as the second choice in the Distaff at Keeneland, Swiss Skydiver stumbled at the start and never really got into the race, finishing seventh to two-time champion Monomoy Girl (Tapizar).

Swiss Skydiver completed a cross-country graded double for her young sire Daredevil, following Shedaresthedevil's win in the GII Azeri S. at Oaklawn. Those two fillies from the new Lane's End sire's first crop are his only two Grade I/graded winners thus far and are two of five black-type winners for the stallion, who recently returned to Kentucky after spending a year in Turkey. Swiss Skydiver is also one of 20 graded victors and 45 black-type scorers out of a daughter of Johannesburg.

The winner's dam Expo Gold brought just $13,000 from Los Santos Customs her first time through the Keeneland November ring in 2017, carrying Swiss Skydiver's full-brother. The resulting colt, the now 3-year-old Inspector General, fetched just $4,000 from Southern Racing at Keeneland September the following year. Expo Gold's next auction appearance was at the 2019 CTBA January Mixed Sale, selling to Blue Chip Thoroughbreds for $15,000 in foal to Danzing Candy. She produced that colt the following April and failed to get back in foal to that California stallion. The 13-year-old mare returned to the Keeneland November ring last term, but this time she summoned $950,000 from Hunter Valley Farm, while carrying a foal from the first crop of GI Travers S. winner Catholic Boy. Two of her daughters sold at the same auction with her first foal Is It Gold (Indygo Shiner) bringing $230,000 from Titletown Racing Stables in foal to Nyquist; and her 2016 foal Miss Hot Legs (Verrazano) hammering for $500,000 to Coteau Grove Farms.