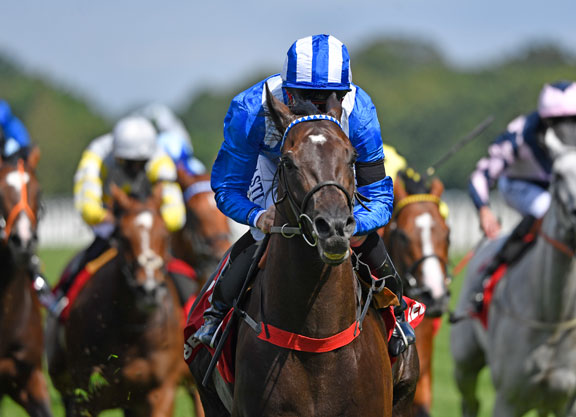 The 2020 G1 Sussex S. was arguably one of the best races of last year's flat season and the victor, Mohaather (GB) (Showcasing {GB}), won it in such a fashion that he quickly become a talking horse for the year. Mohaather was one of a team of horses who helped his owner Sheikh Hamdan become champion owner in Britain for 2020 and he is now taking up stud duties at Shadwell's Nunnery Stud. TDN's Alayna Cullen caught up with Nominations and Marketing Manager Tom Pennington.

AC: Tom, I think it's fair to say that Mohaather won a vintage renewal of the Sussex S., but his racing career on the whole is pretty impressive. Can you tell us more about what he did?

TP: He was an exceptional talent, trained brilliantly by Marcus Tregoning. He started off at Newbury as a 2-year-old, finishing second on debut before winning at Nottingham. He went back to Newbury for the G3 Horris Hill S. and duly won. I think that win caught a few of us by surprise as he was quite a big price. After that race we went into the winter thinking, “we've got a pretty nice horse on our hands.”

Marcus was keen to treat him as a Guineas horse, so he went back to Newbury and put up a very good performance in the G3 Greenham S., where we really got a first look at that phenomenal turn of foot. He beat some very good horses in that race too, including Hello Youmzain (Fr) (Kodiac {GB}). Unfortunately after that he had a setback, which is a great shame and looking at that Guineas now he would have gone very close I'd say.

At four he started back at Ascot in the G1 Queen Anne S. and he got caught in all that traffic. But he traveled like the best in that race. He went back to Ascot for the G2 Summer Mile and I think that is where we saw the horse he really was; he showed that turn of foot twice and to do that was very impressive. He still needed a Group 1 victory and so he went to the Sussex S. at Goodwood, which was arguably the strongest mile race of the year anywhere in Europe. There were two Guineas winners in there, Kameko (Kitten's Joy) and Siskin (First Defence) as well as Circus Maximus (Ire) (Galileo {Ire}). He got caught in a pocket and Jim [Crowley] had to pull him out, take him wide, and that's where that turn of foot came into play again. In that race he showed what we always thought he had and that was pure class.

AC: In any year the Sussex S. seems to be a race that plays importance in a stallion prospect's racing career. Why do you think that is?

TP: You just have to look at the horses that have won it in the past. I think the way Mohaather won it was actually pretty reminiscent of the way Kingman (GB) did with that devastating turn of foot. I also think that's what breeders want now, a quality miler with a turn of foot.

AC: For me as a racing fan, Mohaather was always on my radar but for you, as a nominations person, when do you start looking at the colts within Shadwell and think, 'I might be selling nominations for this horse in a few years?'

TP: All the time. You are always looking at it with rose-tinted glasses a little bit, because you really believe in them. As soon as they are running in their maiden or novice race, you start to think 'this could be the horse.' With a horse like Mohaather, he definitely hit our radar after his win in the Horris Hill. It took a couple of years to get there but he came to fruition.

AC: He's had time to settle in at Nunnery Stud now, what is he like physically?

TP: Physically, he is all there, he is full of quality. He stands just over 16 hands and is beautifully balanced. He's blown people away when he moves, just a super athletic walk and he has a great hindquarter and gaskin. You can see where he got his acceleration from. He's got that great length to his hip and a lovely head and eye. If you produce a foal that looks anything like him, you'll be away.

AC: How is his book looking for his first season?

TP: His book is looking very good. We had a target to get to 100 mares by Christmas and we surpassed that, so we are flying along. With lockdowns and Covid things have been tricky but we were fortunate to be able to show him at Beech House and it was great for people to get their eyes on him because no one was able to see him in the flesh on the racecourse [last year]. Everyone who saw him there was blown away by him so we were able to get a lot of business done at that time. It was a great help and testament to the team here who had him ready to show that week.

AC: Although we had a truncated season it was a good season for the Shadwell horses with Sheikh Hamdan being crowned champion owner in Britain. Watching the winners through the year must have given some respite to the team?

TP: It was a huge year with the likes of Battaash (Ire) (Dark Angel {Ire}) who comes back year after year and always delivers at the top table. We had a fantastic Royal Ascot which was great for the team, it kept us all very enthused and helped raise the spirits. But it didn't stop there, it went through the entire season with York and so on so it was a nice tonic to a tricky year. Obviously it was slightly tinged with a bit of sadness because you're watching the races thinking 'I wish I was there,' and I'm sure for Sheikh Hamdan it was probably the same because that is why he buys horses, to have them compete on the biggest stage. Hopefully with the roll out of the vaccine, although we are back in lockdown, we will be able to get owners and spectators back to the racecourse and all being well we will be welcoming Sheikh Hamdan back in the summer.