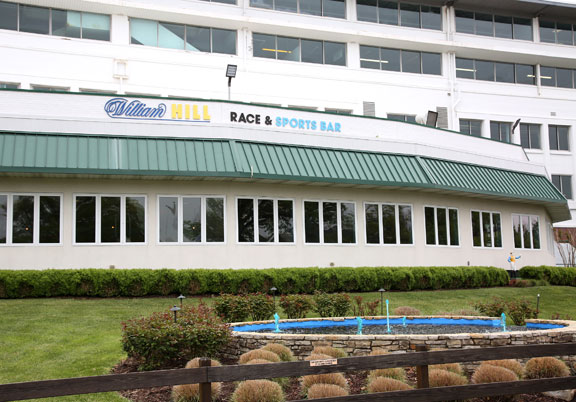 The William Hill Race & Sports Bar at Monmouth Park, where bets are expected to be accepted by the end of May | Bill Denver/Equi-Photo

America's gambling landscape underwent a seismic shift on Monday when the Supreme Court of the United States (SCOTUS) struck down a federal law barring wagering on team sports, opening the legislative floodgates for individual states to pursue legal sports betting as they wish.

The landmark May 14 ruling is generally viewed as favorable within the U.S. horse racing industry because racetracks–at least at first–are viewed as likely to land some of the initial sports betting licenses under the logic that they are already regulated entities set up for the purpose of taking bets. In some states, legislation is already being crafted that will give racing interests a cut of the revenue from sports betting, similar to the way some casino gaming subsidizes purses.

But the initial rush of euphoria within the Thoroughbred industry must be tempered by the daunting reality that numerous other non-racing entities will also want in on the lucrative action. The American Gaming Association estimated in 2017 that the combined legal and illegal sports betting handle in America is $107 billion annually, noting that that figure “would significantly increase” upon the widespread legality of sports wagering.

Now that the day of decriminalization has dawned, Monmouth Park in New Jersey is well positioned to be the first to market for sports betting at a racetrack, perhaps opening its ready-to-go sports bookmaking operation within two weeks.

The on-track infrastructure and legal mechanisms are already in place in New Jersey because the state was the lead plaintiff in Murphy v. National Collegiate Athletic Association. A significant amount of the inertia behind the six-year legal fight was provided by co-plaintiff New Jersey Thoroughbred Horsemen's Association, whose advisor and attorney, Dennis Drazin, successfully led the prolonged, long-shot battle to have the Professional and Amateur Sports Protection Act of 1992 (PASPA) declared unconstitutional by the nation's highest court.

Drazin, who is also the chairman and chief executive of Darby Development LLC, which operates Monmouth Park, began his quixotic quest to offer legal sports betting at New Jersey's last remaining Thoroughbred-only track in 2012 as a means to stave off closure.

“It's a historic case for the country, but for all of us here in New Jersey, it's really the survival of an industry that was threatened and repressed before we had this victory,” Drazin said at a hastily assembled Monday press conference in a room that will soon host part of the track's new sports book.

“It's really been a struggle,” Drazin said. “A lot of people have gone out of business. A lot of farms have been sold. A lot of [horsemen] have left New Jersey. [But] this historic case really means survival for Monmouth Park. It means the ability to compete on a world-class level. It means being able to go out and offer our horsemen and breeders more opportunity–a longer length of season, more opportunities to be here in New Jersey, with perhaps the ultimate goal of [being able to race] from April to December, and then take a few months off.”

Monmouth itself placed a big bet on the Supreme Court's potential overturning of the federal ban on sports betting by investing some $2 million in its facility over the last several years to build a sports bar and convert a chunk of the grandstand to a potential bookmaking operation. After proactively contracting with William Hill US (the largest operator of sports books in Nevada with locations at over 100 properties), the track is ready to roll out sports betting by the end of May.

“My intention, unless someone stops us, is to be up and running in two weeks,” Drazin said. “If the legislature or the governor says slow down, I'm going to listen to them.” He added that he foresees a “soft opening” before that date with the obligatory photo-ops of politicians placing the first symbolic bets.

“The legalization of sports gambling requires an important policy choice, but the choice is not ours to make,” Alito wrote. “Congress can regulate sports gambling directly, but if it elects not to do so, each State is free to act on its own. Our job is to interpret the law Congress has enacted and decide whether it is consistent with the Constitution.”

In dissension, Ginsberg wrote that it is a mistake for SCOTUS to apply a “wrecking ball” to PASPA. “When a statute reveals a constitutional flaw, the Court ordinarily engages in a salvage rather than a demolition operation,” she wrote.

Widening the lens though, it is not clear what the Supreme Court's ruling on PASPA will mean for horsemen and tracks in other states. The words “horse” and “racetrack” are only mentioned passingly within the SCOTUS ruling, but the bottom line is that the question of whether or not to legalize sports wagering is now up to individual states. This is very different from saying that sports betting is now “legal” from coast to coast.

“It's obviously good news for Monmouth Park,” National Thoroughbred Racing Association (NTRA) president Alex Waldrop told TDN. “First and foremost, I think Monmouth is ready to go. Beyond that, it means there will be lots of activity at the state level, primarily as the states figure out how and if they want to participate. It will be incumbent on horse racing interests, tracks, ADWs and regulators to get together with capable [sports betting] operators to determine the best way to proceed.

“There are clearly opportunities here, but there are also challenges, because we are inviting new competition into a market where we have enjoyed relative exclusivity for a long time,” Waldrop continued. “We have reason to be cautious and well-prepared for taking advantage of potential opportunities that are out there.”

Eric Hamelback, the chief executive officer for the National Horsemen's Benevolent and Protective Association, also said he believed that the ruling appears beneficial to the horse industry on the surface, but that racing interests should be cognizant that sports betting isn't going to exist in a racing-centric vacuum.

“Certainly, this isn't [a ruling] that we are surprised about,” Hamelback told TDN. “All the experts told us that at least a partial repeal would come down. Ultimately, I think from the horsemen's standpoint, it's going to be what you make of it. We are set with the Interstate Horse Racing Act to still be the only legal gambling across state lines. What we need to make sure of is that when sports betting comes to a state where we already have pari-mutuel racing, that we can also have a symbiotic, good relationship with [brick-and-mortar or online] sports wagering [entities].”

Hamelback continued: “I think we're as prepared as we can be to be at the table and have discussions. We are obviously an industry that has infrastructure set for wagering, and I would hope that would be of benefit for both our industry and the other sports industries. Ultimately, we have a sports league in and of itself if you look at some of our top-tier racing. So we're available to help educate on their end, and I think we could both reciprocate and hopefully be beneficial to both of us.”

But racing has been down this proverbial “symbiotic” road before in terms of partnering with gaming interests, and now, 25 or so years into the racino era, many of the marriages between casino companies and racetracks are either strained or have been severed. In some non-gaming jurisdictions, horse racing got flat-out left at the gate entirely.

“We need to learn from history, and make sure that we are prepared for not being left behind,” Hamelback replied when asked for his opinion on that scenario. “But [in this case] we still needed to get to the point where the ruling was set, and [now we have to] decide how we're going to handle it.”

Waldrop did not hesitate when asked to handicap the racing states beyond New Jersey that appear poised to act on some form of legalized sports betting.

“Pennsylvania, West Virginia, Maryland, New York, California–those are states that come to mind,” Waldrop said. “Beyond that, there are other states in discussion, like Kentucky and Illinois. I don't anticipate much happening in Florida, based on some of the uniqueness of the tribal [gaming] compact that they have. I know that there are at least 18 states, and maybe more, that have some form of legislation that is pending or is being discussed. The ones that I mentioned are racing states. There are certainly other [non-racing] states. Mississippi is going to be an early adopter. They're going to move quickly. Of the ones that I mentioned that will directly impact horse racing, in most cases, racing has a seat at the table and has secured some right to participate.”

Hamelback had a slightly different take on the same question: “I feel as if Kentucky has certainly been privy to this and discussed it. We'll see how [various states] interpret the ruling. I would think that California would be very progressive. But one of the states that ironically shows the foresight of horsemen is actually Kansas, which doesn't have any live racing right now, but there has been a bill there that would require the sports betting facility to be set up at a live racing track. So those guys are way ahead of the curve [from a Thoroughbred perspective].”

Hamelback then brought up another point: “I think it's going to be a little hard to handicap based on states that have professional sports. For example, there may be some variances that you wouldn't see in Kentucky, where there are no pro sports teams, as opposed to Ohio, where they have active, very popular pro sports.”

When asked how he foresees the NTRA's role in the rolling out of sports betting, Waldrop said, “Our primary sphere of influence is at the federal level. And we have been working at that level with a variety of different entities like the American Gaming Association, and to a lesser extent the [pro sports] leagues, to determine what, if anything, will happen at the federal level. But at this point in time, I think most activity will be at the state level.

Waldrop said one possible piece of federal legislation that could emerge is some sort of framework mandating minimum standards for sports betting in states where it gets legalized.

“That may happen, but perhaps not. I suspect there will be some effort on the part of the sports leagues to secure some form of media rights or integrity fee rights at the federal level,” Waldrop said. “But I don't anticipate that the federal level will be where most of this activity takes place. I think it's going to be at the state level, just like casino gambling, where tracks, horsemen, ADWs and others will have to work together to find common ground and push to secure an opportunity to participate in a meaningful way with whatever form of sports gambling comes to their states.”

As is usually the case when something that has been illegal for a long time suddenly gets decriminalized and there is a big rush to participate, Waldrop urged caution to those racing-related entities that are eager to enter the marketplace as quickly as possible.

“Tracks, horsemen, and others–they're well advised to secure the expertise necessary to understand and succeed in the business of sports betting, both legislatively and operationally,” Waldrop said. “It's complicated, it's risky, and it's different from pari-mutuel wagering.”

This story was posted in Today's Edition, Top News and tagged Monmouth Park.