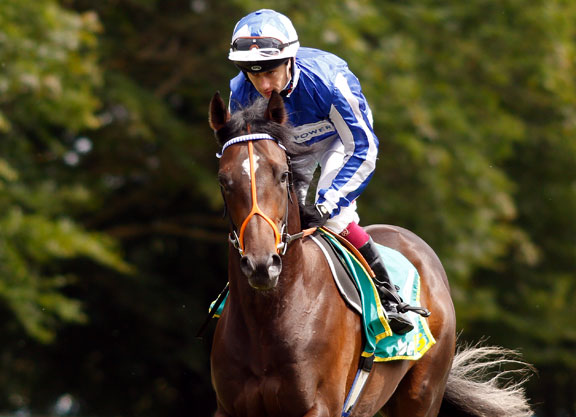 King Power Racing’s Mystery Power (Ire) (No Nay Never) entered Saturday’s G2 bet365 Superlative S. at Newmarket as one of the darker types despite the obvious promise of his Haydock debut win, but emerged the other side of a strong renewal with genuine 2000 Guineas pretensions. Tickled at by the punters at 7-1, the bay who beat the subsequent wide-margin winner Subjectivist (GB) (Teofilo {Ire}) at the Merseyside venue June 22 was the picture of professionalism racing without cover close to the pace set by Godolphin’s 9-4 favourite King’s Command (GB) (Dubawi {Ire}). Committed by Oisin Murphy approaching the two-furlong pole, he was chased to the line by Juan Elcano (GB) (Frankel {GB}) but held him at bay to score by a length, with 3 1/4 lengths back to Maxi Boy (GB) (Oasis Dream {GB}) who was representing the Coventry form. “He’s a super little horse and I was happy to get a tow and keep it simple,” Murphy said. “He’s tough and and hit the line very strongly, so hopefully he’ll get a mile in time but he doesn’t need to at the moment.”

Interestingly, it was the Mark Johnston runner Subjectivist who had succumbed to Juan Elcano on debut also at Haydock earlier last month before advertising the prowess of his two conquerors when winning by seven lengths at Chelmsford last week. Mystery Power was probably better served by these quick conditions than Juan Elcano, but it is clear that both were clear-best here. Maxi Boy had been beaten 3 3/4 lengths by Arizona (Ire) (No Nay Never) in Royal Ascot’s G2 Coventry S. June 18, where Ropey Guest (GB) (Cable Bay {Ire}) was just 2 1/2 lengths in arrears, so this form looks rock-solid.

“He is a lovely colt and it didn’t surprise us when he won first time out, but we have taken our time with him,” Hannon said. “Getting racing from a long way out would have probably helped him a bit. He won well and is a proper horse. Seven furlongs is clearly no problem for him, but a mile is what he will want. I seem to have a lot of seven-furlong two-year-olds as opposed to the fast fireballs. We have some lovely juveniles and they are coming along nicely. We will now have to look at races like the [G2] Vintage [at Goodwood July 30] and the [G1] Dewhurst [at Newmarket Oct. 12].”

Kevin Ryan said of Juan Elcano, “The ground was no problem, he just ran a little bit green into the dip and he got a little unbalanced and Andrea [Atzeni] just had to wait for him to find his stride again. The winner had gone, but he has finished out the race really well. He is a lovely horse for the future. There are no immediate plans. I will speak to the owner then make a plan.”

Mystery Power, whose stable also have the Coventry runner-up and TDN Rising Star Threat (Ire) (Footstepsinthesand {GB}), is a half-brother to the 2017 G3 Prix Miesque runner-up Seaella (Ire) (Canford Cliffs {Ire}) whose dam Gems (GB) (Haafhd {GB}) won over 13 furlongs at a moderate level. She is a half-sister to the dual listed-winning and multiple group-placed middle-distance performer Frank Sonata (GB) (Opening Verse) and the Listed Sweet Solera S. and G3 Prix du Calvados third Peaceful Paradise (GB) (Turtle Island {Ire}). Gems, who is also connected to the sire Alhijaz (GB) (Midyan) and the G2 Princess of Wales’s and G2 Hardwicke S. winner Beauchamp Hero (GB) (Midyan), has a yearling colt by Australia (GB) who was sold to Glenvale Stud for €56,000 at the Goffs November Foal Sale.