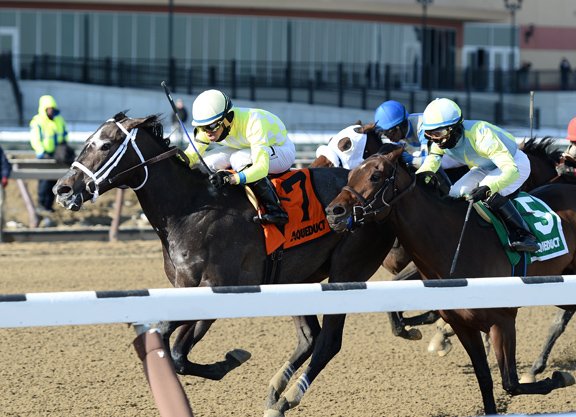 Second best in a pair of graded stakes last year, Sunny Ridge got his 3-year-old season off to a promising start with a game victory. A neck graduate when dangled for $40,000 first up at Monmouth in June, the grey checked in seventh–only beaten 3 3/4 lengths–in a roughly run renewal of Saratoga’s GIII Sanford S. a month later. He returned to winning ways when stretched to a mile for the Sapling S. back in Oceanport Sept. 6, and found only Greenpointcrusader (Bernardini) better when let go at 23-1 in the sloppy GI Champagne S. at Belmont Oct. 3. Skipping the Breeders’ Cup for which he wasn’t nominated, Sunny Ridge was beaten just a neck by well-regarded Exaggerator (Curlin) in the lucrative GIII Delta Downs Jackpot S. Nov. 21.

Away well from his outside draw, Sunny Ride was hung three wide into the first turn before settling in to press Vorticity through easy splits of :24.56 and :49.81. He moved to even terms with that rival midway on the home bend, and eventually wore him down under energetic right-handed encouragement from pilot Manny Franco. Heavy favorite Flexibility (Bluegrass Cat), winner of the GIII Jerome S. here last time, failed to find his best stride in the lane as he struggled to get out from under Adventist to his outside.

“Heading into the race we wanted to be close to the leader,” Franco noted. “We knew our horse has a lot of speed. Thankfully, the race set up for it to unfold that way and we took it from there and it worked out good. He’s a real grinder, he has one pace and likes to run all day. I definitely like him going further.”

Trainer Jason Servis added, “I knew he’d break sharp and that was just what he did. I felt pretty good going down the backside. [Flexibility] had some work to do and I was kind of where I needed to be. It might give him a little trouble sometimes [that] he breaks so good. A win is a win, it’s great. We’ll nominate for the [Mar. 5 GIII] Gotham and we’ll nominate for the [Apr 9 GI] Wood [Memorial S.], but we’ll probably do one of them.”

Click here for a Nov. 12 feature on Sunny Ridge and owner/breeder Dennis Drazin.