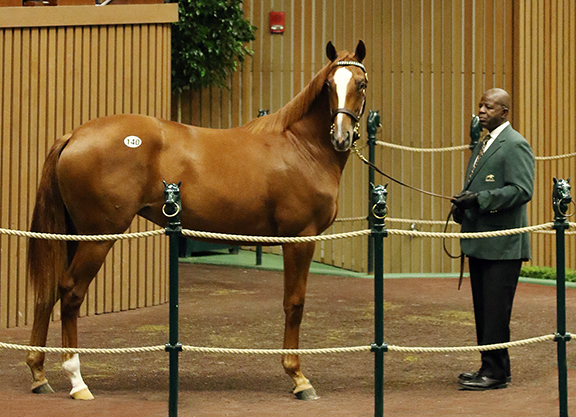 The rail-drawn THE GIRL HERSELF (American Pharoah) gets her career started. Todd Pletcher also saddled the Michael Tabor colorbearer’s half-sister Circular Quay (Thunder Gulch) to a win in the 2006 GI Hopeful S. and runner-up finish in that term’s GI Breeders’ Cup Juvenile. The Girl Herself worked a four-furlong bullet in :49 (1/13) at Palm Beach Downs Apr. 5.

Nikki and Papa (Mineshaft) takes on maidens for the first time after a pair of graded attempts, including a third-place finish after ducking in at the start in the GIII Forward Gal S. on debut Feb. 1.

The very well-bred $800,000 KEESEP graduate PRAIRIE WINGS (Tapit), produced by an unraced daughter of bluehen mare Mariah’s Storm (Rahy), returns after finishing a promising second on debut behind next out winner Fashion Babe (Curlin) for the now-retired Kiaran McLaughlin going 6 1/2 furlongs in Hallandale Feb. 9. She makes her first start for Todd Pletcher Sunday.

Chad Brown will saddle a pair, headed by 5-2 morning-line favorite Primacy (Union Rags), who rallied smartly from far back to finish a strong second first out here Feb. 23. The winner that day Finding Fame (Empire Maker) made it two-for-two for Hall of Famer Shug McGaughey at Gulfstream Friday. Risk Model (Into Mischief), a $390,000 OBSAPR buy, completed the trifecta for Brown in her unveiling at this distance Feb. 23. TJCIS PPs