Sunday's Racing Insights: Flashy Juveniles Line Up on Both Coasts 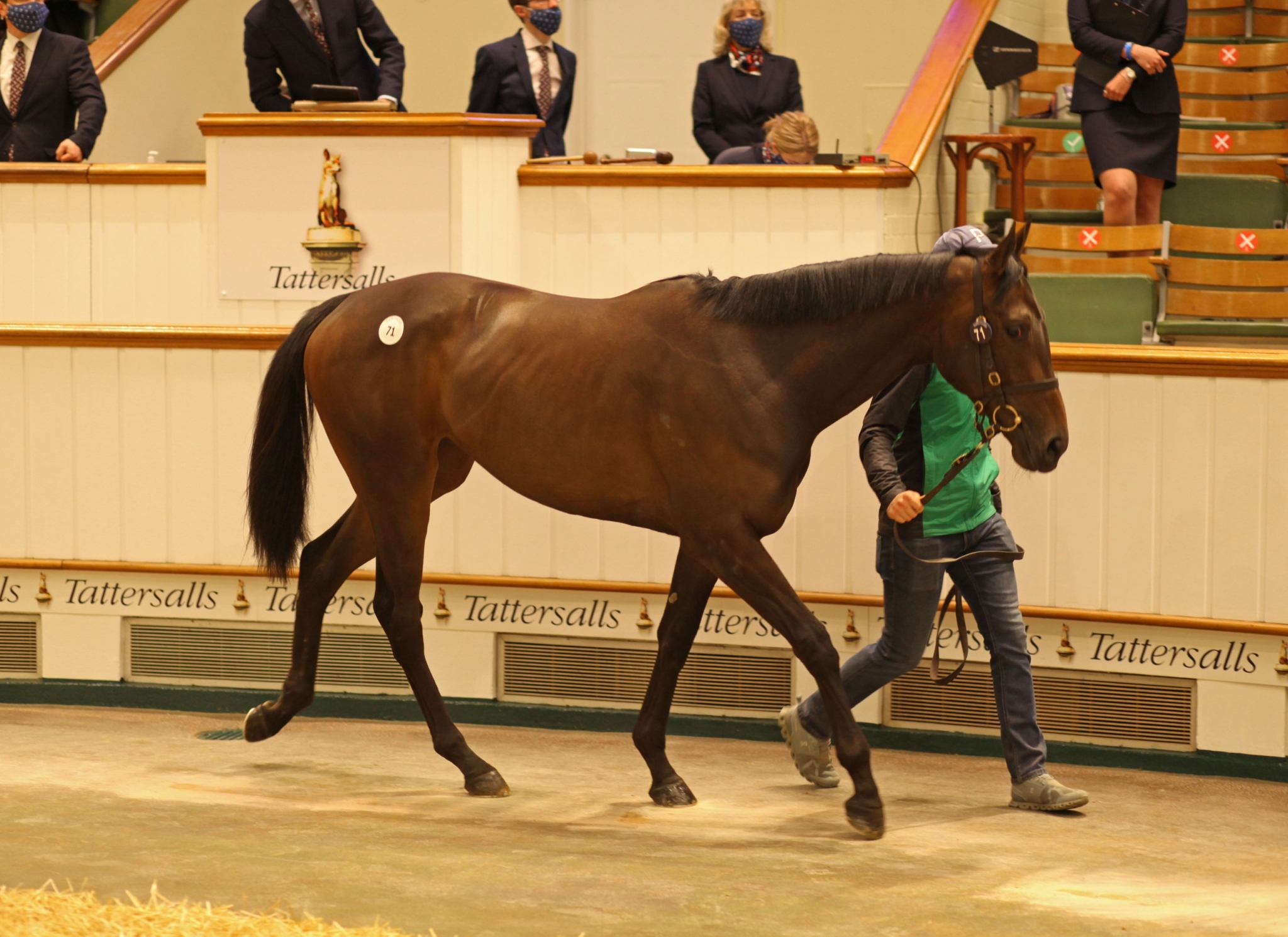 Tout Ensemble (Practical Joke) makes her first start here for Chad Brown and the powerful partnership of Peter Brant, Mrs. M. V. Magnier and Mrs. Paul Shanahan. The $185,000 KEENOV weanling topped the Tattersalls Craven Breeze Up Sale this April at 360,000gns (approximately $520,000). Click for more. A half to Group 2-placed juvenile Rebel Tale (Tale of the Cat), the May 4 foal hails from a productive female family of graded/group winners. Her dam is half to European SW/MGSP Arch Rebel (Arch) and to the dam of GSW Customer Base (Lemon Drop Kid). This is the family of Archarcharch, et al.

Woodslane Farm homebred S Oh S (Into Mischief) is out of a half-sister to two-turn MGISW and young sire Tonalist (Tapit). This is also the female family of superstars Havre de Grace and Riskaverse. Dream Lith (Medaglia d'Oro), a $590,000 Fasig-Tipton November buyback as a weanling, is a granddaughter of GISW juvenile Mi Sueno (Pulpit), who in turn is a daughter of GISW Madcap Escapade (Hennessy). Openthegate (Arrogate), a $60,000 KEESEP yearling, is out of a half-sister to MGSW Thiskyhasnolimit (Sky Mesa) from the family of Bernardini.

Gal in a Rush (Ghostzapper) debuts in the second division of maiden special weight fillies at Saratoga Sunday for the red-hot Christophe Clement, West Point Thoroughbreds, Chris Larsen and Titletown Racing Stables. The $130,000 KEENOV weanling blossomed into a $375,000 OBS March juvenile off a smooth :10 1/5 breeze and quick gallop out. Her two-time winning dam, who raced exclusively in turf routes, is out of Martha Washington S. winner Miss City Halo (Carson City).

Demandsrespect (Union Rags) was a $195,000 KEESEP yearling out of juvenile stakes winner Walkwithapurpose (Candy Ride {Arg}), who has already produced two stakes horses as well as $575,000 Palm Collage (American Pharoah), who took her debut at Ellis earlier this month as a 3-year-old. Ike and Dawn Thrash homebred Four Dawn (Nyquist) is out of SW Third Dawn (Sky Mesa), who was beaten a nose by Stardom Bound (Tapit) in the 2009 GI Santa Anita Oaks.

Miss Interpret (Street Sense) was beaten a head at second asking downstate June 25. She is out of a half-sister to MGISW sprinters Paulassilverlining (Ghostzapper) and Dads Caps (Discreet Cat). Lemieux (Nyquist) was a well-beaten second on debut at Belmont May 13 to Happy Soul (Runhappy), who returned to romp in the Astoria S. She's out of a half-sister to MGISW Diamondrella (GB) (Rock of Gibraltar {Ire}). TJCIS PPs

Bob Baffert and “The Avengers” have three of the seven juvenile colts signed on for this. Carbonite (Union Rags), a $560,000 KEESEP buy, was third in his Los Alamitos debut with minor traffic trouble. He's out of a half-sister to GI Preakness S. hero Cloud Computing (Maclean's Music) and now adds blinkers. Barossa (Into Mischief), meanwhile, was a $775,000 September yearling and is out of GSW Bouquet Booth (Flower Alley). Murray (Street Sense), a relative bargain buy at the same auction at $300,000, is out of a half to MGSW juvenile Listen Here (Gulch) and to the GSP dam of GISW grasser La Coronel (Colonel John).

Peachtree Stable homebred Drink the Wind (More Than Ready) is favored on the morning line at 2-1 for the Peter Miller barn. He's out of GSP Crushed Velvet (Malibu Moon), a debut romper as a late season juvenile for Baffert from the family of the Hall of Famer's champion sprinter Midnight Lute. The bay ridgling prepped for this with a :46 1/5 (1/82) bullet from the gate here July 19 and may be a bit of a talking horse.

Sumter (War Front) could be prepping for a future start on the grass–his dam A Little Bit Sassy (More Than Ready) was a SW/MGSP on the infield, and has a year-older full-sister to Sumter named Pizzazz who broke her maiden over a turfy mile here last November and took the California Oaks on Golden Gate synthetic in April. TJCIS PPs