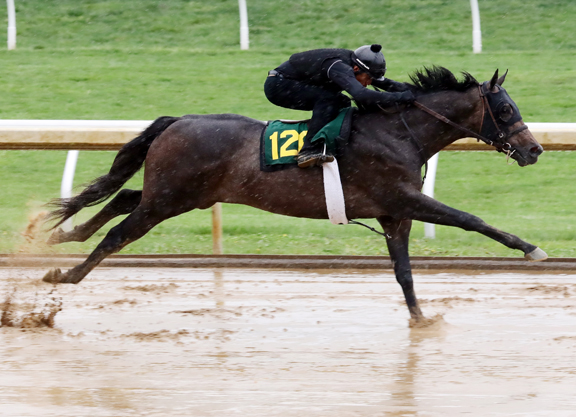 8th-GP, $46K, Alw/OC ($75K), N1X, 3yo, 1mT, 4:25 ET
ERJ Racing and Gary Barber’s PATROL (Liam’s Map) takes on an experienced group of foes as he looks to remain unbeaten in his turf debut Sunday. A $190,000 KEESEP yearling, he was the second-priciest juvenile to sell at Keeneland April last term at $360,000 off a co-quickest furlong breeze in :10 flat. Turned over to Mark Casse, he made a successful debut sprinting at Aqueduct Feb. 15. He has a right to handle the surface switch on pedigree, as dam Jenny’s So Great (Greatness) was an accomplished turfer who took the 2011 GIII Royal North S. sprinting on the Woodbine sod but who was also a stakes winner at nine panels. Nine of the 11 horses in the main body of this field have competed in stakes races, and include Todd Pletcher-trained morning line favorite No Word (Silent Name {Jpn}). A debut winner at Saratoga last season, the full-brother to MGSW/MGISP Silentio was fifth with traffic trouble as the favorite behind Structor (Palace Malice) in Belmont’s GIII Pilgrim S. TJCIS PPs

10th-OP, $60K, Msw, 3yo/up, f/m, 6f, 6:38 ET
The racing week at Oaklawn concludes with a strong group of female maidens, led by Bob Baffert-trained California invader MERNEITH (American Pharoah). The $350,000 FTKNOV weanling turned $600,000 OBSMAR buy (:20 4/5) has settled for second as a heavy favorite in each of her first two starts at Santa Anita–sprinting Jan. 20 and over a mile Feb. 23. The daughter of SW Flattermewithroses (Flatter) got acquainted with the Oaklawn surface by firing a half-mile bullet in :46.80 Apr. 11. Among the well-bred newcomers signed on is Three Diamonds Farm’s $410,000 KEESEP buy It’s Mine (Medaglia d’Oro). The Steve Asmussen pupil is out of MGSW and GSP Tempus Fugit (Alphabet Soup), making her a half to GSW Majestic River (A.P. Indy). Gary and Mary West homebred Ocean Breeze (Curlin) is the first foal out of Oceanwave (Harlan’s Holiday), who was MGSP routing over this strip. She hails from the family of Tapizar. Likely longshot Gypsy’s Feather (Munnings) is a half to SW and GISP Featherbed (Smart Strike), who has already produced GSW Dynamic Impact (Tiznow). TJCIS PPs