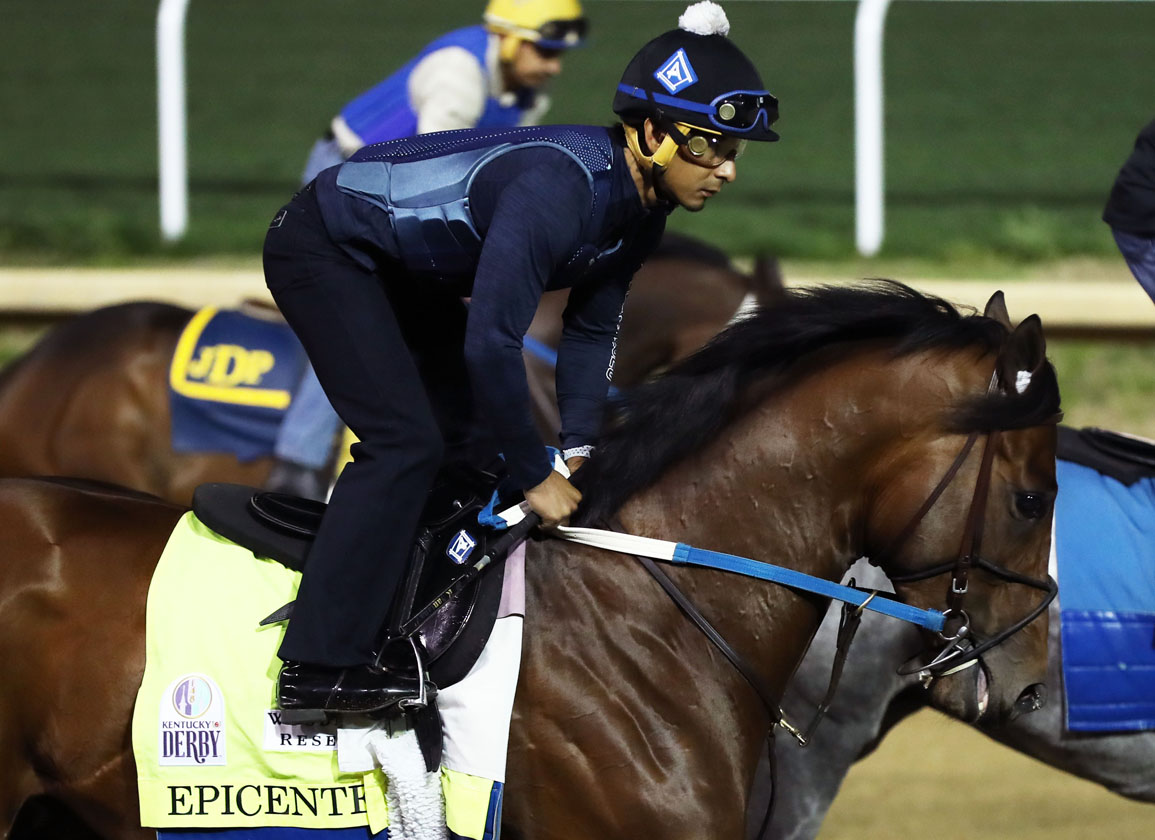 With exercise rider Wilson Fabian in the saddle, Echo Zulu broke to the inside of regular workmate King Ottoman (Curlin), who was ridden by former jockey Eddie Martin, Jr. Echo Zulu worked through eighth-mile fractions of :12.20, :23.80, :35.60 and :47.40. She galloped out seven furlongs in 1:25.20, according to Churchill Downs clocker John Nichols.

“We're so happy the weather has cooperated on our scheduled work days. The racetrack is in great shape this morning,” Asmussen said. “These were the most significant works for us. We're following a pattern that we're very comfortable with. I love the rhythm these horses are in. Both of these horses have kept their same workmates from New Orleans this winter. I'm unbelievably appreciative of the job Wilson and Eddie have done helping get them to this point.

“They've both started out as tremendous prospects and individuals. We're aiming with incremental improvement to not take too big of a leap forward. So everything is a building block to success. Since they have arrived here at Churchill that trend has continued. I was so excited with Echo Zulu's first work here.”

“It went good. I got him in :59 4/5. They got him in a minute. He worked with that horse before the Florida Derby, two weeks out,” Joseph said. “We kept everything the same, the same workmate, a similar pattern two weeks out. That time he ran a 1:02. This time he ran a little faster than a minute. Last time he galloped out in 1:13. This time he galloped out in 1:12.”

“You just try to keep an even keel. It's a long way to go in horse racing terms–13 days,” Joseph said. “You just want to get through everything and ship up there fine and go into the race the best we can.”

White Abarrio is scheduled to breeze a half-mile next Sunday before shipping to Churchill Downs the following day.

Klaravich Stables' Early Voting (Gun Runner), considered possible for the Derby, worked four furlongs in :49.92 (44/118) over the training track at Belmont Saturday. The GIII Withers S. winner, who has made all three career starts at Aqueduct, was second in the Apr. 9 GII Wood Memorial.

“The work went fine,” trainer Chad Brown said. “He worked easy. It was his first work back and he was moving well. We haven't made any final decision yet on what we're doing in terms of the Derby, but I want to talk to Mr. [Seth] Klarman about it this afternoon a little bit more.”

Working at Keeneland Sunday, Oaks contender Yuugiri (Shackleford) worked five furlongs in company in 1:01.60 (10/20). She broke off at the half-mile pole and recorded fractions of :24.20 and :48.40. Jockey Flavien Prat  was aboard for the work, pinch-hitting for Florent Geroux who has the mount in the Oaks. Prat rides G3 UAE Oaks winner Shahama (Munnings) at Churchill Downs May 6.

“She did it very easy,” said Prat. “I was very happy with the work.”

The work was the second since Yuugiri won the Apr. 2 GIII Fantasy S.

Trainer Rodolphe Brisset's wife, Brooke, oversaw the work for her husband, who was traveling back from Oaklawn.

“We got what we wanted this morning,” she said, adding that Yuugiri would work at Keeneland again next Sunday morning.