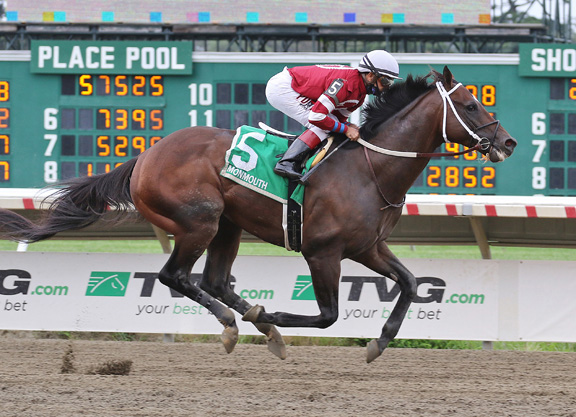 7th-SA, $61K, Msw, 2yo, 6f, post time: 7:03 p.m. ET
SIR LONDON (Malibu Moon) was led out unsold on a bid of $135,000 at the 2020 Keeneland January Sale, but improved over the next 17 months and was knocked down to agents Alex Elliott and Ben McElroy for $700,000 after breezing a furlong on his wrong lead in :10 flat (see below) at this year's Fasig-Tipton Midlantic Sale. The priciest of 24 juveniles (32 ring) for his late sire in 2021, Sir London is a half-brother to MSP Castellani (Quality Road) and GSP Seeking Her Glory (Giant's Causeway). His multiple Grade III-winning grand-dam is responsible for GSW Converge (Sidney's Candy) and SP Hot Dad (Sidney's Candy). Winning Map (Liam's Map) cost Pick View just $55,000 as a KEESEP yearling but blossomed into a $525,000 OBS March acquisition by Emmanuel de Seroux's Narvick International after a quarter-mile drill in :20 3/5. TJCIS PPs

'Rising Star' Back In Action at Churchill…
9th-CD, $141K, Alw/Opt. Clm., 3yo/up, 7f, 4:55 p.m. ET
Winchell Thoroughbreds' PNEUMATIC (Uncle Mo) earned 'TDN Rising Star' status for a fast-finishing allowance victory going a mile at Oaklawn last April and went on to complete the trifecta behind Maxfield (Street Sense) in the GIII Matt Winn S. the following month. Fourth to Tiz the Law (Constitution) in the GI Belmont S., the homebred made light work of seven rivals in the Pegasus S. at Monmouth Park in August and was last seen finishing well down the field in the GI Preakness S. exactly 52 weeks ago. TJCIS PPs

2019 OBS April Topper Makes Belated Bow…
4th-WO, C$123k, Msw, 3yo/up, 1mT, post time: 2:48 p.m ET
MILANO (Into Mischief) was purchased by DeMeric Sales for $300,000 at the 2018 Fasig-Tipton Saratoga Sale and was successfully resold at OBS April the following spring, fetching a sales-topping $1.3 million from Team Casse on behalf of owner John Oxley after the colt breezed two furlongs in :21 flat. The bay colt is out of an unraced half-sister to MSW & GISP By the Light (Malibu Moon), the dam of MGISW By the Moon (Indian Charlie) and GSP Wonderful Light (Tiz Wonderful). TJCIS PPs

Freakish First-Out Winner Takes Next Step…
7th-WO, C$101K, Alw, 3yo/up, 6fT, post time: 4:27 p.m. ET
ARTIE (Artie Schiller) had plenty of admirers as a 7-2 chance making his debut in a 6 1/2-furlong turf maiden Sept. 4 and was a clear last early after being steadied right out of the machine. But he traveled sweetly thereafter, pinched ground on the turn and exploded through the lane while switching his leads back and forth to graduate by 9 1/2 lengths in fast time (video), good for an 89 Beyer Speed Figure. The 8-5 morning-line favorite has gate six with Kazushi Kimura back in the irons. TJCIS PPs