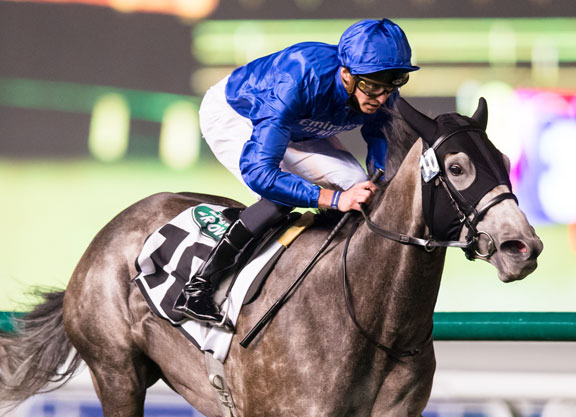 Summer Romance (Ire) (Kingman {GB}) was named a 'TDN Rising Star' on debut when winning a Yarmouth maiden by two lengths in June of 2019, and she followed that effort up immediately two weeks later with a six-length win at listed level in Newmarket's Empress Fillies' S. Put away for the winter after finishing third in the G3 Dick Poole S., Summer Romance found last year's Covid-delayed G1 1000 Guineas to be a bridge too far at first asking, finishing eighth of 15 behind Love (Ire) (Galileo {Ire}), but she made amends when taking the G3 Princess Elizabeth S. at Epsom on the Derby undercard just a month later. Summer Romance's abbreviated summer campaign came to a close last year after she finished last of sixth in the G1 Prix Rothschild, and although she likewise failed to sparkle first-up at the carnival when fifth in the G2 Cape Verdi S. on Jan. 28, she was ready second time around and had no problem handling the extra furlong of Thursday's G2 Balanchine S.

Breaking on top, Summer Romance and James Doyle led the field of 10 fillies and mares by about a length down the backstretch. Stylistique (GB) (Dansili {GB}) put the pressure to her at the quarter pole, and Summer Romance responded to kick two lengths clear at the top of the lane. She had lengthened that advantage to four lengths approaching the final furlong, and though Stylistique battled back and Althiqa (GB) (Dark Angel {GB}) came flying late, Summer Romance was dominant enough to hit the wire 2 1/4 lengths the best.

Winning trainer Charlie Appleby said, “Last time she was fresh and went down to the post with her hood on and they took the hood off and she took [William Buick, rider in the Cape Verdi] on. Also in the pre-race and pre-lims, as you probably all saw, we saddled her out the back there and brought her down late, so she wasn't walking around the paddock. Obviously, she ran with the hood on this time, which has helped her. We ticked a few more boxes on the way in and obviously James gave her a great ride on the front end and she got a soft lead.”