Summer Harvest the Stuff of Dreams 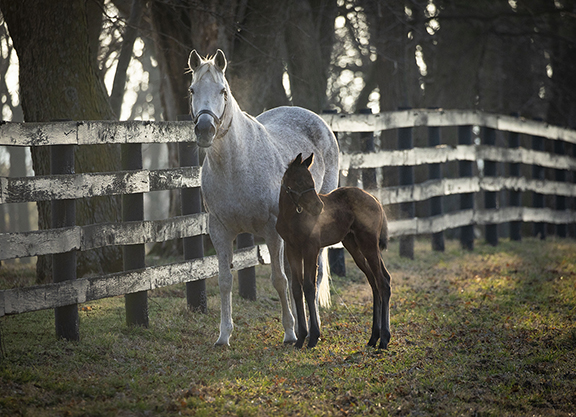 What a business this is: how random, the turn of the dial. And yet, at the same time, how symmetrical; how suggestive of a destiny coherent enough for us all to keep trying to read it.

A budget of $10,000, permitting the purchase of a mare for $7,000. Jim Weigel would have gone home already, but the two he had earmarked in the catalog had both soared past his reach. Then a reserve of $10,000 on her yearling daughter, only for the bidding to stall at $7,000. So he kept the filly, and raced her. And when she won the Grade I, he ran down the steps at Oaklawn.

“Though by that time I'd already had my stroke, and was kind of gimping along on my right leg,” Weigel recalls. “About halfway down I turned around and said, to nobody in particular: 'So you wouldn't give me $10,000 for her, huh? Now look what happened!'”

That was 15 years ago, the GI Apple Blossom H., and Dream Of Summer was then a dappled gray. In the meantime, with the whitening of her coat, she has introduced an ever brighter shimmer to a family tree previously so dull that neither she nor her mother could gain due attention in the ring.

Two of her foals have been Classic-placed: Creative Cause, a Grade I winner at two, was third in the GI Preakness among serial performances that qualified him among the best of his crop; and Destin, who had set a track record in the GII Tampa Bay Derby, led into the stretch in the GI Belmont S. only to be caught at the wire. Both are by Giant's Causeway; and so, too, is Vexatious–who introduced fresh luster to their dam's breeding record when holding off champion Midnight Bisou (Midnight Lute) by a neck in the GI Personal Ensign S. at the start of the month.

That success confirms Dream of Summer as one of the most accomplished broodmares in Kentucky; and her Uncle Mo weanling filly, and the Justify foal developing in her womb, as authentic aristocrats: a bewildering denouement to a tale that began, unknowably, as Weigel left work one Friday evening some 50 years ago.

Weigel spent much of his career as a naval sonar engineer but at this time, still in his 20s, he was working down in Orange County on the ballistic missile program.

“We used to go up to the big airbase in central California, Vandenberg, though I never actually saw one of those missiles shot,” Weigel remembers. “I'd either be in the basement of the blockhouse, which was too close to watch, or back at the hotel getting my fill of beer! I was lucky. Some of the guys in the department were sent to Vietnam, while I was getting jobs like Switzerland and the U.K. For a time they had me just over the hill from Troon, and I spent four days there for the British Open.

“Anyway I just happened to be walking out from work that day, a little bit after five o'clock. And a friend of mine, Jerry Borquez, was sitting in his office and I stopped on the way out. I asked him what he was doing that weekend and he said that he thought he'd go out to Santa Anita. When I said I'd never been to the races, he said: 'Well, why don't you come along?'

“Of course I started out as a $2 bettor, and I hadn't cashed a ticket at all until the Santa Margarita Handicap came up. And then I think I had a show ticket I was able to cash in for $2.60. And I thought to myself: 'This is easy!' And I was hooked. I'd go out there with Jerry, we'd walk from the back parking lot under the racetrack and into the infield. In those days they still hadn't instituted Sunday racing, there was no account betting, and there was always a big crowd. I thought it was just great.”

It was during a stint with the Ford Motor Company that Weigel dipped his toe into a syndicate of 37, some of them in for as little as $100, for a “no-account gelding that never won a race.” But every time a call went out for a top-up of funds, the membership fell away. Weigel did carry on with a couple of friends for many years, with the odd cheap claim, but as early retirement loomed he decided to try his luck making a longer play: he would go to the 1996 January Sale at Barrett's, and find himself a broodmare.

“I thought that about the only way I could get a valuable horse would be to breed it,” he says. “What did I know about it! I was going to pay cash, because people didn't know who I was and they weren't about to give me credit. I had $10,000, and I had picked out these two mares. But they were both bid to over $20,000, so I had to let them go.”

He was just sitting there, browsing the catalog, when Hip 189 came in: an unraced 6-year-old by Skywalker.

“She had a reasonably good pedigree,” Weigel says. “By a Breeders' Cup Classic winner, from a long line of good Californian broodmares. I think she'd got hurt at a 2-year-olds in training sale, and they'd bred her then: that kind of shocked me, that she'd already had three foals and that the youngest had been in utero when she was just two. Anyway I started bidding on her and, to show you what a neophyte I was, it turned out I was bidding against myself. The spotter had to come over and say: 'That's already your bid.'”

A couple of years later, Weigel sent her to Caro's grandson Siberian Summer, who had shocked Bertrando (Skywalker) in the GI Strub S. but never got much traction during a peripatetic stud career. He did have better genes than was apparent at the time, his half-sister Magnificient Style (Silver Hawk) subsequently emerging as a blue hen in Europe. And Marianne Millard was adamant that his filly out of Mary's Dream had something about her.

“Marianne runs Here Tis Ranch, where she was born and raised, and liked her right from the start,” Weigel recalls. “She told me: 'Now don't you sell this filly cheap.' She wanted me to put a number in my head, when we took her to the yearling sale at Fairplex, and to stick to it. Well, she had siblings that had won races but I don't think any had cracked the $40,000 mark [in earnings] so I figured I couldn't pitch too high.”

He settled on $10,000 and, when the bidding dried up at $7,000, duly sent her back to Here Tis. And for a long time afterwards he reproached himself for doing so. First, a bucked shin. Then another one; and then a hairline fracture. Each time, Dream Of Summer had nearly made it to the track before going back to square one. But Juan Garcia, her trainer, meanwhile stopped talking about maiden claimers and, when she was finally launched, instead put her in a maiden special weight at Hollywood Park. “She ran away with the race, and the rest is history,” says Weigel.

Dream Of Summer won 10 times in 20 starts across three years, earning $1,191,150. And this was the first horse Weigel had owned outright, the horse for whom he had registered silks. Unfortunately she was second both times she ran in the GI Santa Margarita, but that was still a good deal better than the $2.60 show ticket the first time her owner saw the race. Actually the 2006 running proved her final start: Garcia thought she might persevere, but warned Weigel that there was some creaking around the sesamoids. “Juan,” Weigel told him. “You pick out the transportation company and I'll pick out the farm.”

His choice was Taylor Made, where he thanks the team not just for “a lot of good times together” but also for their help in navigating the challenges of foal-sharing, in order to afford the kind of stallions Dream Of Summer deserved. The turning point, once again, was a twist of fate: she was booked to Storm Cat, but his fertility proved to be ebbing away and Ashford offered his son instead. “So that was just by default,” Weigel says.    “Storm Cat had started shooting blanks, she missed a cycle breeding to him, and Giant's Causeway was a consolation prize. And it all started from there.”

Of course, Dream Of Summer still had that left-field pedigree. There was no guarantee that her athletic capacities, wherever she had found them, would be reproduced. Plus some of her foals were on the small side. Creative Cause made no more than $135,000 as a Keeneland September yearling; but his millionaire endeavors helped his brother Destin to $400,000 four years later. The next foal was Vexatious, who slipped through for $150,000. But after lightning had struck a second time on the track, through Destin, more recent yearlings have realized $625,000 and $500,000.

Though fourth in the GI Kentucky Oaks, Vexatious had owed her only previous graded stakes success to a disqualification and is now 6-years-old. Yet she is plainly thriving, having joined Calumet Farm's young trainer Jack Sisterson only last year. And, while Dream Of Summer is 21 and sadly has no yearling this time round, the caliber of her recent matings means that she could yet add new chapters to her remarkable story.

After Creative Cause won the GI Norfolk S., offers for his dam ran to seven figures. Weigel told everyone that she was not for sale at any price. A couple of times a year Weigel likes to fly out from his home at Valencia, north of Los Angeles, to his sister in Wisconsin, and they drive down to the Bluegrass together to hug Dream Of Summer, kiss her on the nose. As he told the agents, “you can't put a price-tag on that.”

“And she's still like a kid,” he enthuses. “She's a beauty. Always been a lovable gal, a sweetheart. I remember when she had her first foal, I could get in the stall with her: she would just shield the baby, but without ever being mean. And while there was nothing that we saw ahead of time, about these three top-notch racehorses she's produced, when I went down to Del Mar to see Creative Cause, I thought he did have his momma's personality. And now he's doing well at stud, too.”

On some levels, Dream Of Summer is a definitive enigma as a filly with no obvious pedigree who nonetheless became a Grade I winner and has since replicated the same athletic mechanics in her stock. Actually there are some intriguing strands among the seven generations of hard-running Cal-breds behind her. Mary's Dream, for instance, is out of a granddaughter of Protanto, the forgotten 1971 GI Whitney winner who died young but was by Native Dancer out of a half-sister to Bold Ruler. But while Weigel was then new to the whole game, even decades of experience won't explain some of these mysteries to any of us.

“Well, I guess to sum it up I'd just say I've been damned lucky,” he says. “A couple more bids when I tried to sell her, and I may have been out of the racing game entirely, or just playing it very low out here in California. You just do the best you can; and I guess I was on a path that allowed me to be lucky.”

This story was posted in Shared News and tagged Creative Cause, Destin, Dream of Summer, James Weigel, Taylor Made, Vexatious.