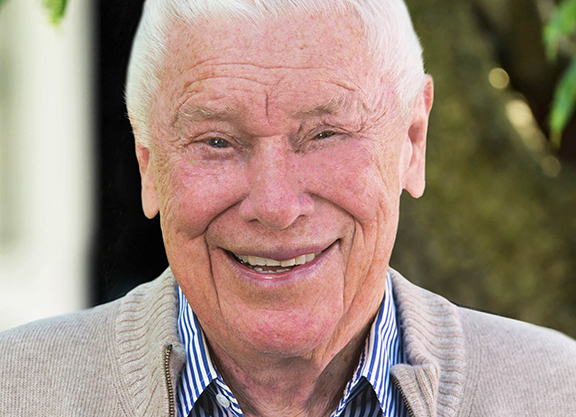 B. Wayne Hughes: “Stallion Cap is a blatant abuse of power.” | Spendthrift photo

Spendthrift Farm, Ashford Stud and Three Chimneys Farm are suing The Jockey Club in federal court over the “stallion cap” rule that went into effect in 2020, alleging that the 140-mare breeding limit now being phased in amounts to a “blatant abuse of power” that acts as an “anti-competitive restraint” and threatens to disrupt the free-market nature of the bloodstock business.

The plaintiffs contend that the stallion cap “serves no legitimate purpose and has no scientific basis” while alleging that the nine stewards of The Jockey Club who voted to adopt the rule change purportedly did so based more on a desire to satisfy their own “conflicting economic interests” rather than their organization's stated purpose of “facilitating the soundness of the Thoroughbred breed.”

Although KHRC chairman Jonathan Rabinowitz and KHRC executive director Marc Guilfoil were not directly involved in The Jockey Club's decision to impose the cap on matings (known as Rule 14C), the suit contends that in their official KHRC capacities, those two are responsible for overseeing how the state delegates Thoroughbred registration authority to The Jockey Club.

So by extension, the suit alleges, if The Jockey Club in the future refuses to extend registration privileges to foals produced by matings that are considered over the cap limit, the KHRC will be barring those horses from competition, thus “effectively eliminating the economic viability of any such foals.”

The suit contends that in this instance, “The Jockey Club is not fulfilling an administrative function of merely identifying and registering, for the KHRC, those horses that qualify as purebred Thoroughbred horses; instead, The Jockey Club is making its registration decisions, and rejecting actual Thoroughbred horses, based on whether its Stewards approve of the breeding decisions of the horse's owners.”

The suit also states that The Jockey Club Stewards' “have conflicting economic interests-owning and/or representing various competing racing and breeding private entities,” and that their “economic interests will be served by the Stallion Cap.”

It is not immediately clear based on the complaint why the KHRC officials were singled out for inclusion in the litigation. In fact, the suit makes a point of stating that “the effect of the new Jockey Club Rule 14C is the same outside of Kentucky, as all other racing jurisdictions in the United States condition a horse's eligibility to enter a Thoroughbred race on registration by The Jockey Club.”

The farms are seeking an unspecified amount of compensatory and punitive damages against The Jockey Club (but not the KHRC). The plaintiffs are demanding—without stating exactly why in the suit—that those amounts be tripled. However, the Clayton Antitrust Act empowers private parties injured by violations of the Act to sue for treble damages under Section 4 and injunctive relief under Section 16.

The suit also demands “an injunction requiring the KHRC, through its Chairman and Executive Director, to permit Thoroughbreds to race in Kentucky regardless of their inclusion in The Jockey Club registry.”

The suit also wants a court declaration stating that the alleged property rights breaches by the defendants are “arbitrary and capricious and violate their due process and equal protection rights guaranteed by the Kentucky and the U.S. Constitutions…” The suit also argues that the rule violates the Sherman Antitrust Act and suppresses competition.

“As a result, the highest quality Thoroughbred horses will be bred less times than market economics would otherwise dictate,” the complaint contends. “Hundreds of millions of dollars of stud fee revenues will be impacted; all owners of mares will pay higher prices to breed their mares; and less well-connected owners of mares will be precluded entirely from access to high quality stallions.

“In addition, owners of the premiere Thoroughbred stallions and stallion prospects will potentially move or sell their horses out of Kentucky to other countries whose Thoroughbred registries do not impose any Stallion Cap,” which the suit states is “every other country in the world besides the U.S.”

A press release circulated by the group Tuesday morning charges that, “Membership of The Jockey Club is by invitation only, and the decision was made by its Board of Stewards without discussion or a vote at the Club's Annual General Meeting. The Jockey Club Stewards making the decision had clear conflicts of interest given they also represent or own various breeding and racing entities who stand to benefit now that owners of mares are being denied their first-choice stallion.”

Sherelle Roberts-Pierre, a KHRC spokesperson, wrote in an email that “The KHRC is aware of this lawsuit, and our legal team looks forward to addressing these issues in the litigation process. We have no additional comment at this time, due to the KHRC's policy about not commenting on pending litigation.”

Citing the significant, decades-long decline in the North American foal crop and concerns “with the narrowing of the diversity of the Thoroughbred gene pool,” The Jockey Club announced on Sept. 6, 2019, that its board of stewards was considering a per-stallion breeding limit of 140 mares that would be phased in over a multi-year period.

The proposed cap was met with a hazy mixture of consternation and support within America's bloodstock community. At the time, The Jockey Club President and C.O.O. James Gagliano wrote in response to a TDN query that “We neither expect nor see a basis for a legal challenge.”

When the cap was voted in by The Jockey Club's stewards and announced as effective on May 7, 2020, the new 14C rule drew support for its attempt to broaden the stallion base and to spread the wealth, so to speak. And The Jockey Club's seemingly conciliatory grandfathering-in of existing stallions also appeared to provide a welcome degree of a time buffer by phasing in the changes.

But the cap was still criticized by some industry stakeholders for creating a two-tier system of different rules that will now apply to different stallions based on age.

And some members of the bloodstock community just plain didn't like being told how to manage their matings.

According to the new version of Rule 14C, for stallions born in 2019 and earlier, there remains no limit to the number of mares reported bred in the United States, Canada, and Puerto Rico. For stallions born in 2020 and later, the maximum number of mares covered will now be 140. To enforce compliance, The Jockey Club simply will not register any foals that are not the product of the sire's mating with the first 140 mares to which that stallion was bred in any given year.

According to The Jockey Club's Report of Mares Bred, 42 stallions bred over 140 mares in 2020.

Of that total, 16 of those 42 stood at either Spendthrift, Three Chimneys or Coolmore/Ashford.

Nine of the top 10 highest-covering stallions stood at Spendthrift or Coolmore; 13 of the top 15 stood at the three farms bringing the suit.

It's still too early to try to put a hard-dollar prognostication on future financial implications of the stallion cap. But the farms' complaint tries to do so retroactively and makes several ballpark projections.

“Moreover, as a result of the foregoing, new Jockey Club Rule 14C has already diminished the value of the 2020 weanlings acquired by Plaintiffs, whose future productivity as stallions will be artificially limited by that Rule, and it has already diminished the value of Plaintiffs' current crop of stallions as the potential productivity of the foals they produce will be limited by that Rule,” the court filing states.

The farms' suit is not shy about portraying The Jockey Club as an influence-wielding entity that is allegedly rife with factionalism.

In one instance the suit states that the organization “has also leveraged its power over the North American Thoroughbred industry by unlawfully conspiring with other registries throughout the world to expand the geographical reach of its rules.” In another section, it states, “Indeed, at least one Jockey Club Steward has publicly acknowledged that economic protectionism—rather than any interest in curtailing inbreeding among Thoroughbreds—is the real purpose behind the Rule.”

It also contends that, “The Jockey Club has leveraged the commercial power it exercises as the State sponsored registry of Thoroughbred horses into numerous other related profit-making ventures.”

But while enumerating a list of alleged conflicting business interests among The Jockey Club's stewards might make for splashy headlines, the legal meat of the case appears to rest on the contention that “Plaintiffs' interests in their Thoroughbred horses and their right to generate fees from the breeding and sale of such horses are protected property rights under the Fifth Amendment of the U.S.Constitution, as made applicable to the states by the Fourteenth Amendment to the U.S.Constitution.”

As applied in Kentucky, the suit alleges that Rule 14C “does not tend to protect or preserve health or safety; instead, its sole purpose is economic protectionism; it is designed to protect the economic interests of owners of second-tier stallions who will usurp the breedings that would, under free market conditions, have otherwise gone to the first tier stallions but for the imposition of that Rule.”

“Moreover,” the suit states, the rule “violates the dormant commerce clause because it is aimed at economic protectionism and it imposes a burden on interstate commerce that is clearly excessive in relation to the putative benefits that it claims to promote. In addition, Defendants' actions in imposing and abiding by the Stallion Cap constitute an impermissible taking of Plaintiffs' property interests.”

The suit continues: “Plaintiffs had a reasonable expectation that they could continue to conduct their Thoroughbred breeding business in accordance with the recognized standards for production of Thoroughbred foals…. Defendants have offered no compensation for the loss of Plaintiffs' protected interests nor any means of seeking such compensation.”

Commenting on behalf of the plaintiffs in a prepared statement, Spendthrift Farm owner B. Wayne Hughes said: “The introduction of the Stallion Cap by The Jockey Club is a blatant abuse of power that is bad law, bad science and bad business. A handful of individuals from a private club in New York have been allowed to make a decision that will negatively impact the future of Thoroughbred racing and breeding both in Kentucky and the whole country.

“We have filed this complaint to defend the industry from anti-competitive, un-American and arbitrary decision making that is not based on scientific evidence.

“If they can limit the number to 140, what's to stop them from limiting it to 100 or 80 or any other number down the road? What if your mare isn't one of the 140? We are really concerned about the small breeder's ability to survive this.”