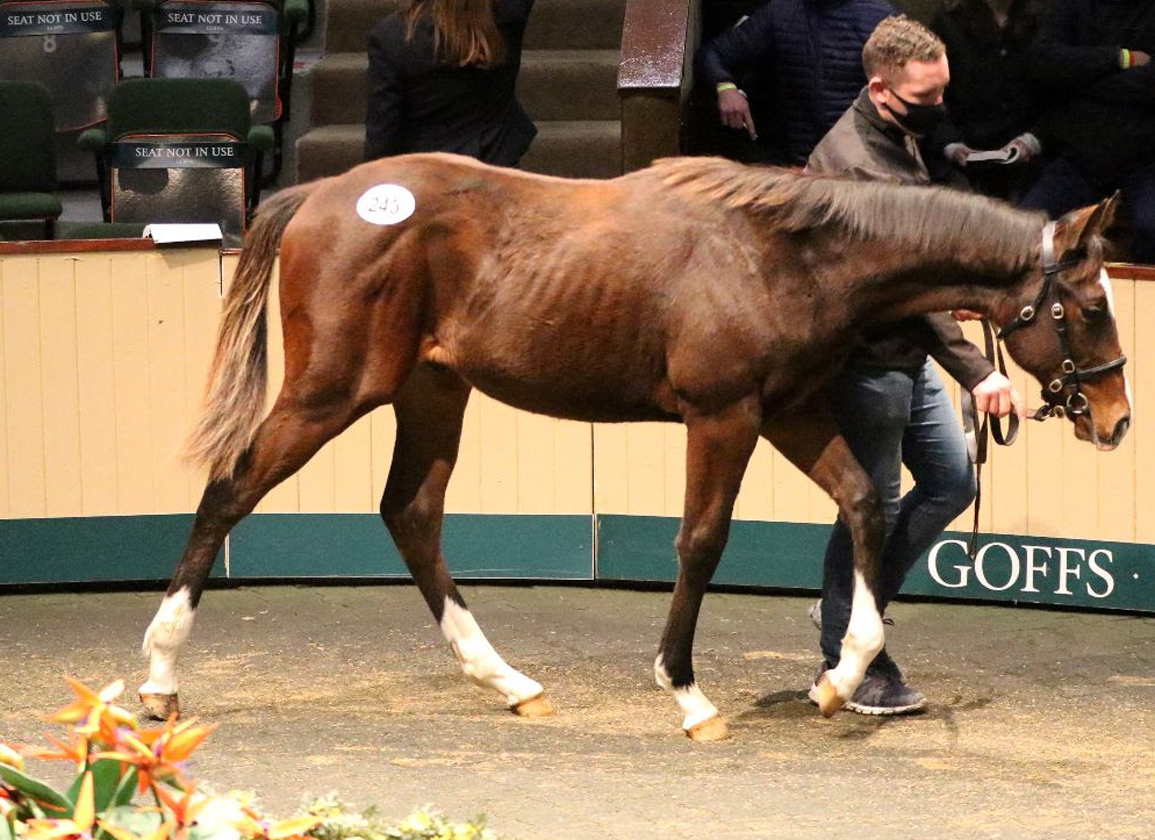 KILDARE, Ireland–Unlike last year when it took place the week before Christmas, the Goffs November Foal Sale returned to its rightful place in the calendar and proceedings got off to a very positive start on Monday.

The highest price of the day was reserved for the final foal through the ring when lot 245, a colt by Tally-Ho Stud stallion Mehmas (Ire), sold for €140,000 to Tally-Ho's Tony O'Callaghan. Bred by Ms. Vivienne Anne Bird and offered by Paul McEnery's Vinesgrove Stud, the colt is out of the winning Dutch Art (GB) mare Dutch Monarch (GB), whose half-brother Gwan So (GB) (Ulysses {Ire}) was a promising juvenile this year, finishing third in the Listed Flying Scotsman S. at Doncaster before being sold to continue his career in Australia.

The foal's yearling half-brother by Galileo Gold (GB) made €95,000 at the Orby Sale and after fending off Willie Browne, O'Callaghan said, “We loved the yearling and we actually tried to buy this foal out of the field in July. He is a cracking foal and will be back for resale. The stallion couldn't be doing any better and we are thrilled with how he is going.”

Starspangledbanner (Aus) will stand for a career-high fee of €35,000 in 2022 after some exceptional international results courtesy mainly of the Joseph O'Brien-trained GI Saratoga Derby and G1 Cox Plate hero State Of Rest (Ire), and it was a daughter of the rejuvenated Coolmore stallion that played a prominent role on Monday when selling for €62,000 to Ciaran Conroy of Glenvale Stud, who stood alongside David Wachman.

Bred and offered by Airlie Stud, lot 125 is out of Sandtail (Ire) (Verglas {Ire}), who has bred one winner so far and is a half-sister to Group 1 winner Zafisio (Ire) (Efisio {GB}).

“We're delighted with that price,” Airlie's Anthony Rogers said afterwards. “My mother bought the granddam Goldthroat (Ire) (Zafonic) and she produced Zafisio so it's been a lucky family for us.”

A colt by Ballylinch Stud stallion Make Believe (GB), offered by the famed Kilkenny nursery, proved popular when selling to Noel Carter of Rathmoyle Exports for €60,000. Lot 157 was bred by Ballylinch manager John O'Connor in partnership with Anne Hallinan and is out of a half-sister to G1 Middle Park S. winner Astaire (Ire) (Intense Focus) in Swish Dancer (Ire) (Whipper), from a family that also includes top-level winners Mohaather (GB) and Accidental Agent (GB) (Delegator {GB}).

Ballylinch Stud had earlier been in action as a purchaser when acquiring lot 41, a daughter of the farm's Arc-winning stallion Waldgeist (GB) whose first foals have just hit the market. Hailing from Nelius Hayes's Knockainy Stud, the chestnut is a half-sister to the stakes-placed Kodiac Gal (Ire) (Kodiac {GB}) and was hammered down to Ballylinch for €48,000.

Caravaggio's excellent start to his stallion career through the likes of G1 Cheveley Park S. winner Tenebrism and G2 Debutante S. winner Agartha (Ire) should ensure his stock remain in strong demand and lot 89 by the now US-based Coolmore sire proved one of the more sought after foals of the day when selling to Gaelic Bloodstock for €52,000. Offered by The Castlebridge Consignment, the filly is the third produce out of the former Jim Bolger-trained winner Oh Grace (Ire) (Lawman {Fr}) from the family of other Bolger luminaries Teofilo (Ire) (Galileo {Ire}) and Poetic Flare (Ire) (Dawn Approach {Ire}).

Another to fetch €52,000 was lot 119, a colt by Ten Sovereigns (Ire) knocked down to FC Bloodstock. The Arglo House Stud-consigned foal is out of the unraced Rip Van Music (Ire) (Rip Van Winkle {Ire}) and is a grandson of the G3 Park Express S. winner Danehill Music (Ire) (Danehill Dancer {Ire}).

RC Bloodstock made two significant early purchases, kicking off with lot 28, a colt by Starspangledbanner (Aus) from the Smurfit family's Forenaghts Stud that cost €44,000. The same price was also enough for RC bloodstock to secure lot 46 from Baroda Stud. The good looking daughter of Twilight Son (GB) is the first produce out of the former Cheveley Park Stud owned dual winner Litigious (GB) (Lawman {Fr}), who was bought for £40,000 last year carrying this filly. In the meantime the dam's half-brother Earlswood (GB) (Pivotal {GB}) emerged as a high class performer for Johnny Murtagh, winning the G3 Gallinule S. and the G3 Royal Whip S. at The Curragh during the summer.

The Irish National Stud's Phoenix Of Spain (Ire) is another stallion with his first foals on show and Leona Walsh got €42,000 for her colt foal, lot 221, with Aidan O'Ryan signing the docket for the half-brother to the stakes performer Mattymolls Gaga (Ire) (Dragon Pulse {Ire}).

An early highlight on Monday came via a Profitable (Ire) colt lot 17 who sold to Beechvale Stud for €40,000. The chestnut, offered by his breeder Leaf Stud, received a major pedigree update not long ago when his 2-year-old half-sister Limiti di Greccio (Ire) (Elzaam {Aus}) won the Listed Staffordstown Stud S. at The Curragh in the manor of a filly that has genuine Group 1 aspirations next year.

The November Foal Sale continues from 10 a.m. on Tuesday.