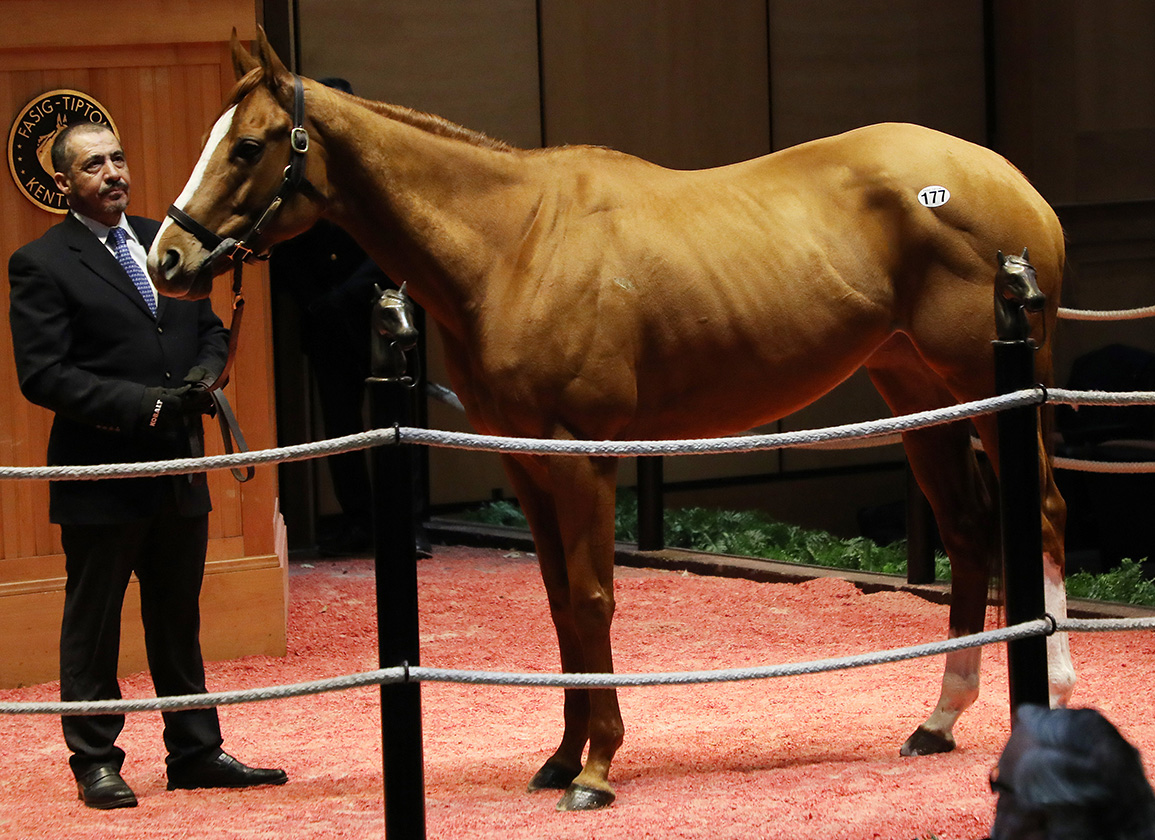 The two-day Fasig-Tipton Winter Mixed Sale got off to a strong start Tuesday with 15 six-figure horses, topped by the $450,000 racing/broodmare prospect Bodhicitta (GB) (Showcasing {GB}).

The yearling market was especially strong Tuesday with youngsters accounting for half of the top 10, led by a $260,000 colt by City of Light. That yearling was the only offspring in the catalogue for his sire, who was very popular last year, topping Keeneland September with a $1.7-million colt.

Last term's champion freshman sire Gun Runner continued to be in demand on the back of a stellar first season and strong weekend at Aqueduct, where he had two new stakes winners. He sired the second-highest-priced yearling Tuesday, a $225,000 filly and a pair of mares in foal to the Horse of the Year summoned $150,000 and $135,000.

“Yearlings were stronger this year than last year for one simple reason… we had better yearlings,” said Fasig-Tipton President Boyd Browning. “It has become a very viable market. We saw a healthy demand for weanlings/short yearlings during November and January. We appreciate sellers for bringing high-quality short yearlings and they were very well rewarded.”

“Last year's first session was overshadowed by the second session, probably due to the supplements,” said Browning. “I don't know if the difference will be as dramatic this year as it was last year, but there are a lot of good horses tomorrow as well. Clearly, we are trending in a very favorable direction. The numbers are great, but even better is the level of interest and level or activity. Consignors were having horses blowing past their reserves. We are seeing a legitimate marketplace for all types of horses. The most encouraging thing is there a vibrancy even at the $50,000 level.”

The breeding stock market was exceptionally high during the November sales and numbers remained strong at last month's Keeneland January Sale. Sellers and buyers alike saw that trend continue at the February sale.

“It seems pretty solid,” said Archie St. George, who sold the day's top horse Bodhicitta. “It seems like the January Sale and before [in November]. If you have the right product, everyone wants it. There seems to be a buzz around the grounds and the market appears solid.”

Grade II winner and MGISP Bodhicitta (GB) (Showcasing {GB}) (Hip 177) sparked some midday fireworks at Fasig Tuesday, hammering for $450,000 to Japan's K I Farm, which did its bidding on the internet.

“I think that is a fair price for her,” said Archie St. George, who consigned the racing/broodmare prospect. “I think everyone is happy. She is going to go to Japan. I'd like to thank the owners and Richard Baltas the trainer. We wish the new owners the best of luck with her. She is a beautiful filly and she deserved to bring money with her race record and physical. She is an exciting prospect for her new owners down the road.”

Owner Calvin Nguyen bought Bodhicitta for 60,000gns at the 2019 TATMAY sale and brought her to California. She was still a maiden of seven starts with several in-the-money finishes. She captured four races during her first year in California, including the 2020 GII Yellow Ribbon H. She placed in consecutive renewals of the GI Gamely S. and RNA'd for $775,000 at the Fasig-Tipton November Sale. The chestnut made two starts this term, finishing second in the GIII Robert J. Frankel S. on New Year's Day and fourth in the Jan. 29 GIII Megahertz S. The 6-year-old mare's record currently stands at 23-4-5-3 with $370,808 in earnings.

“I had a great run with her,” Nguyen said. “She won a lot of races for us and to be able to sell her at this price was very exciting. My trainer [Richard Baltas] advised me that it is probably best to take some money off the table. We set a pretty good reserve on her. We wanted to test the market since all of the sales had been so strong. She is sound and still can do a lot of things going forward, but we wanted to capitalize on the market.”

Bodhicitta's second dam is stakes winner Klarifi (GB) (Habitat), who is the dam of MGSW & G1SP Fracas (Ire) (In The Wings {GB}).

Offspring by City of Light were flying off the shelves at the yearling sales last year. He even produced the $1.7 million Keeneland September topper, which was the first time a first-crop sire had achieved that feat in at least a decade. With first 2-year-olds this year, the Lane's End resident's yearlings remained popular at Fasig February with a City of Light colt (Hip 42) bringing $260,000 from Peter Pugh, agent for Cherry Knoll Farm.

When asked what he liked about the colt, Pugh said simply, “A lot!” He added, “He is just a gorgeous horse.”

Buyers will get another chance at this colt as Pugh plans to send him back through the auction ring later this year. Pugh enjoyed pinhooking success with a young sire last year, selling a Practical Joke filly he purchased for just $90,000 at KEENOV for $520,000 at KEESEP.

Out of Spoken Not Broken (Broken Vow), the dark bay colt is a half to SP Eloquent Speaker (Flatter), who was supplemented to this sale as Hip 536. This is also the family of SW & GSP Bridgehampton (Bernardini) and stakes winners Stormy Novel (Bernardini) and Amundson (Curlin).

Dash Goff refused to be denied for the 7-year-old mare Cocktail Party (Mizzen Mast), determinedly fighting off a stubborn internet bidder to take home the gray for $240,000. Consigned by James Keogh, Hip 218 sold in foal to Liam's Map.

“I'm looking to buy three or four really nice mares and build up my broodmare band,” Goff said. “I bought two in November and three in January.”

The Arkansas businessman continued, “Some will go to Arkansas and some will stay here. This one will stay in Kentucky with the Welkers. The Welkers and I have done business for 35 to 40 years. I did business with his dad. We had a great night last night. We had two nice foals last night, a Mitole and an American Pharoah. So, I'm having a great day.”

Bred by the Herbener family, Cocktail Party won two of 10 starts for Michael Foster and was purchased by Fords Run Farm for $28,000 at the 2019 KEENOV sale. She has one previous foal, a 2021 colt by Connect. Cocktail Party is a full to MSW & GSP Barrier Reef and a half to stakes-placed Arctic Party (Eskimo) and Kissin Party (Kissin Kris).

“I liked everything about her,” Goff said. “Her former owner Jim Herbener was a good friend of mine. She may be the nicest mare on the grounds. I am real pleased with her.”

On the back of a stellar freshman season and two new stakes winners over the weekend, a filly (Hip 38) by champion freshman sire and Horse of the Year Gun Runner was in high demand during Tuesday's opening session, bringing $225,000 from Pick View's Joe Pickerell, who signed the ticket as Stock Thoroughbred LLC.

“She was probably the best filly in the sale,” Pickerell said. “For what we are looking for, she is the right kind. She is by the hottest young sire in the world. The kind that look like her and move like her are hard to buy.”

As for future plans for the filly, Pickerell said, “She will be a pinhook. We are not sure where yet. We will let her develop and make a plan for her.”

Bred in Pennsylvania by Christian Black's Forgotten Land Investment Inc., Hip 38 is the second foal out of the Discreetly Mine mare Sororitysweetheart, who is a full-sister to GSW Classy Class and GSP Full House. She was consigned by Taylor Made Sales.

“Anytime you sell a short yearling for $225,000, you have to be happy,” Black said. “She has been straight forward from the beginning. We are very happy she ended up in good hands with Joe Pickerell. We are looking forward to seeing her in another sale in the future.”

Black experienced success with Gun Runner in the past, selling a colt by that stallion to Lael Stables for $550,000 at the Fasig-Tipton Saratoga Sale in one of the final consignments of his good friend, the late Mike Recio's South Point Sales. Black also sold Secret Quality (Elusive Quality) (Hip 7) in foal to Gun Runner for $135,000 to Hunter Valley Farm Tuesday.

Gun Runner topped the freshman sire list last year with 30 winners and six black-type winners, two of which were Grade I winners, including soon-to-be champion Echo Zulu. The dual Eclipse winner had another incredible weekend prior to this auction with his son Early Voting capturing Saturday's GIII Withers S. at Aqueduct and his daughter Shotgun Hottie taking that venue's Ruthless S. Sunday. The latter was catalogued to this sale as Hip 18, but was scratched following her breakout score.

“We were trying to take advantage of the fact that Gun Runner is a once in a generation stallion,” Black said. “You only see a sire like him maybe once every 50 years. She fit the bill. We are very happy with what we got. She was brought here to sell and showcase the mare a little bit too.”