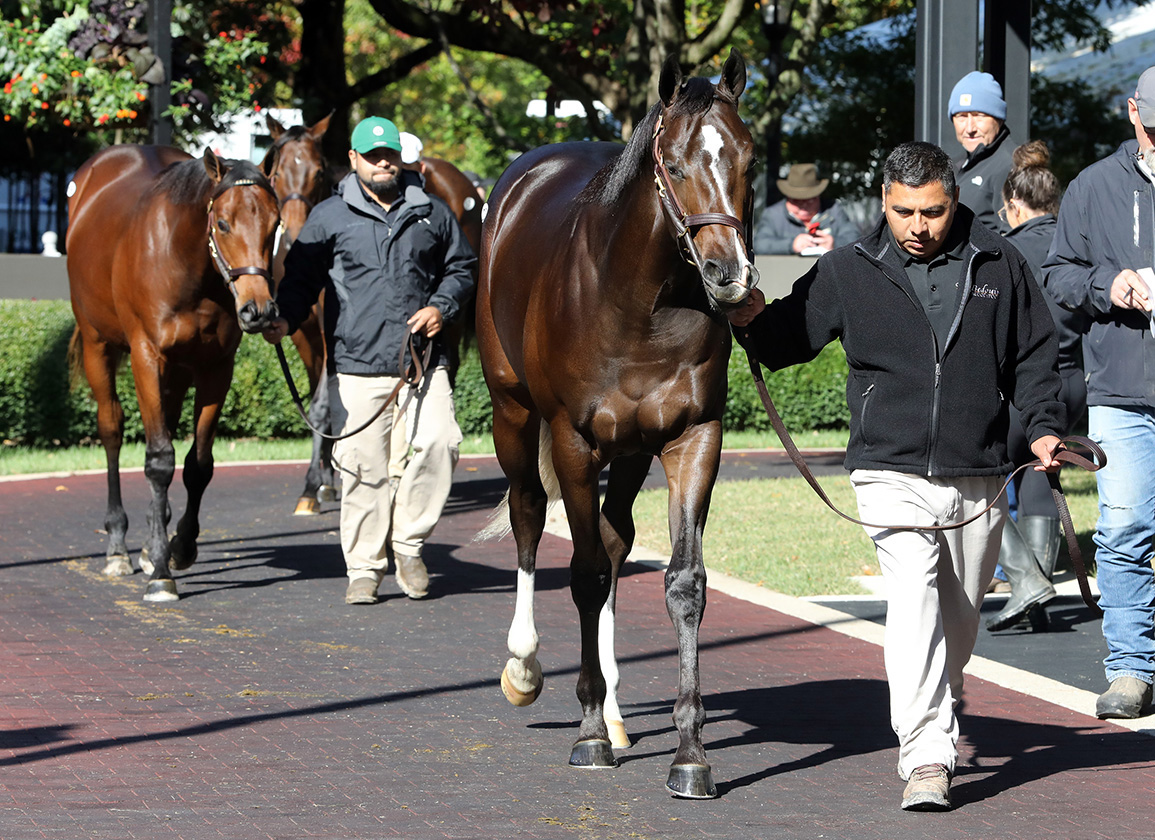 LEXINGTON, KY – The start of the opening session of the Fasig-Tipton Kentucky October Yearlings Sale was delayed an hour by heavy rain, but the weather seemed to be the only thing that could hold back the auction once the bidding got started Monday at Newtown Paddocks.

“We were very pleased with the opening session of the October sale,” Fasig-Tipton President Boyd Browning said Monday night. “I don't think there was any surprise that there was a lot of demand. We've seen strength in the yearling sales from the start to, hopefully, when we finish on Thursday. There was a lot of activity at all levels. There was spirited bidding at all levels with lots of competition and a very diverse crowd that was here buying horses with lots of representation from all over the world.”

“I think people feel more confident, in terms of the overall clearance rate and the percentage of horses sold who were catalogued,” Browning said. “I think there are fewer scratches, in part, because people now realize based on where the market is right now, you might still be able to sell a horse reasonably successfully without a lot of pre-sale vet activity because there is so much activity that is taking place in the back walking ring.”

Bloodstock agent Donato Lanni made the day's highest bid when going to $700,000 to acquire a colt by Tapit (hip 22) from the Bedouin Bloodstock consignment early in the session. The price was the co-second highest for a colt in the sale's history.

The Fasig-Tipton October sale continues through Thursday with sessions beginning at 10 a.m. daily.

Bloodstock agent Donato Lanni, bidding on behalf of the stallion-making partnership of SF Bloodstock/Starlight/Madaket, helped the Fasig-Tipton October sale get off to a rousing start when making a final bid of $700,000 to secure a colt by Tapit (hip 22) from the Bedouin Bloodstock consignment.

“He just checked every box,” Lanni said of the yearling. “He has a fast look about him and he's by Tapit. He looks fast, he looks early and he looks sound. He is the kind of horse who just looks like he fits our program. When they possess everything, they end up bringing quite a bit.”

Lanni signed for 24 yearlings for a total of $10,590,000 on behalf of the partnership at last month's Keeneland September sale.

Of his continued buying spree as the yearling sales season winds down, Lanni said, “Some horses need a little more time to develop and maybe the earlier sales weren't the right place for them. I think this is a good place to sell. The sale has gotten better and better and it has a lot of momentum.”

Hip 22 is the first foal out of stakes winner March X Press (Shanghai Bobby). He was co-bred by SF Bloodstock and Henry Field Bloodstock. The co-breeders purchased March X Press, with the colt in utero, for $330,000 at the 2019 Keeneland November sale.

The bay colt had originally been targeted at the Fasig-Tipton Saratoga Selected Yearlings Sale in August.

“We were supposed to take him up to Saratoga and about two weeks before the sale he tangled with a fence,” Bedouin Bloodstock's Neal Clarke said. “So that put him out of Saratoga and then this was the next likely option for him. He went down very well here, people loved him and he sold well.”

Of the session-topping price, Clarke said, “You can't hide a good horse. If you have a nice one, they will find it. These people are professionals and they work hard and they will find them.”

A colt from the first crop of Triple Crown winner Justify (hip 21) sold for $350,000 to John Fort early in Monday's first session of the October sale. The colt was bred and consigned by Blue Heaven Farm, which bred and campaigned his multiple stakes winning dam Maple Forest (Forestry).

“We haven't been in this business too long, so it's nice to see those third generation-type horses of ours succeed,” said Blue Heaven President and General Manager Adam Corndorf. “Maple Forest is a very special mare for us. She's a homebred stakes winner and won several stakes for us with Todd Pletcher. She has been a wonderful mare for us. She has had some very nice sales yearlings for us and some of them have earned blacktype.”

Hip 21 had originally been targeted at the Keeneland September sale.

“He was in the September sale at Keeneland, but he had a little paddock accident about a week before the sale,” Corndorf said. “We were lucky that we still had a sale to target after that. He just needed a couple of extra weeks and he stood out here.”

“We have a small operation, we have about 15 mares and produce about 12 horses a year,” Corndorf said. “We are hoping to just keep building. We would love to get to a point down the road where we could keep a couple of nice fillies as broodmare prospects, but for right now we are sales-focused and trying to sell everything.”

“She's in foal to Medaglia d'Oro,” Corndorf said of the 2019 Canadian Horse of the Year who the operation acquired in 2018. “She is living the good life. She has a place with us forever. And we look forward to keeping some fillies out of her in the future.”

A colt by Union Rags (hip 266) is likely to return to the sales ring next spring after selling for $235,000 to the bid of pinhooker Ciaran Dunne, who signed under the name of the Redwings partnership. The yearling is out of stakes winner Purely Hot (Pure Prize) and is a half-brother to Grade I winner Eight Rings (Empire Maker). He was consigned by Taylor Made.

“He's by a proper stallion and he's a half-brother to a talented horse,” Dunne said of the yearling's appeal. “You've got to take a shot somewhere, so we took a shot there.”

“The market is very strong,” Dunne said. “That's not surprising based on what happened earlier in the year. There were a lot of orders unfilled, ours included, so we knew people were going to come in here and be aggressive. It seems the ones people want bring way more than you'd anticipate.”

Dunne admitted the partnership groups which were so active at the Keeneland September sale had made his job more difficult.

“I think the different groups that are trying to make stallions seem to be playing more in our territory, in terms of physicals over pedigree, so they are a bigger pain in the ass than they normally are.”

Hip 266 was bred by Orpendale/Chelston/Wynatt. Bloodstock agent Hugo Merry purchased Purely Hot, with the colt in utero, for $1.2 million at the 2019 Keeneland November sale.