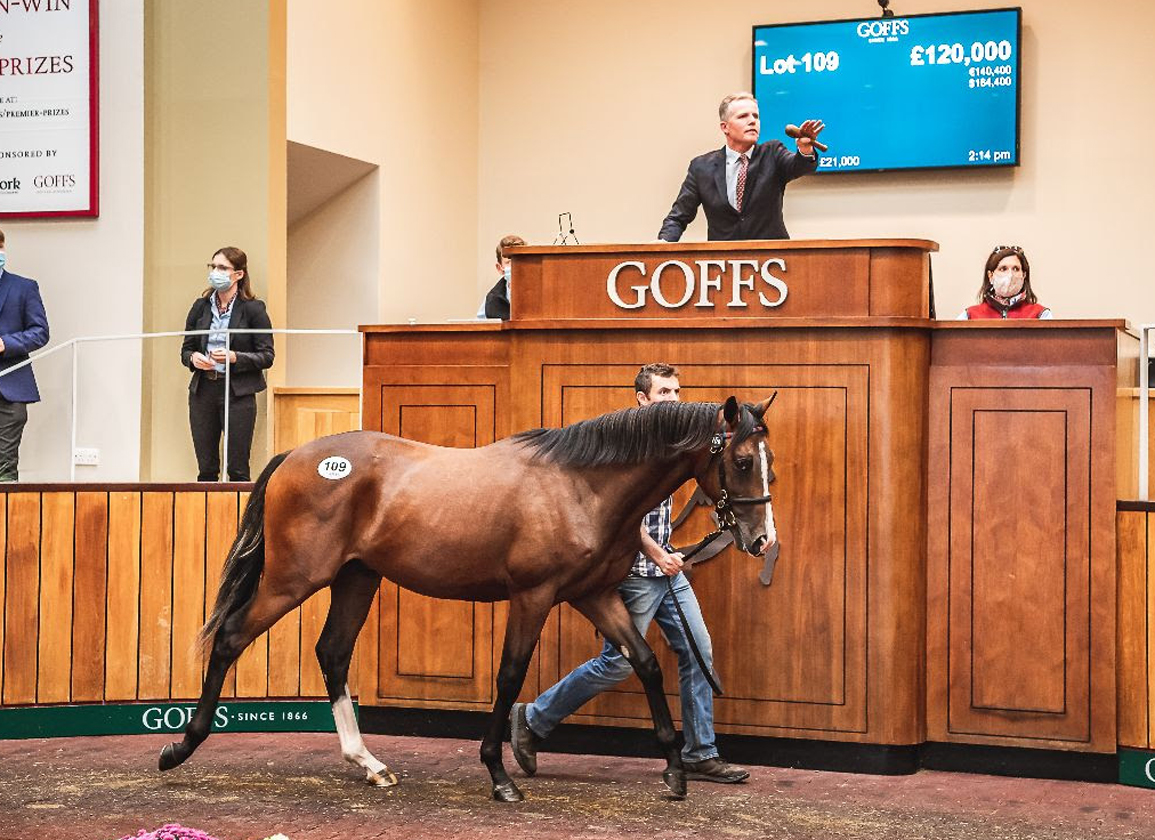 DONCASTER, UK–The desire of John Dance to develop Manor House Stud into a major force was well on show during the first day of the Goffs UK Premier Yearling Sale in Doncaster yesterday as the owner came out on top at £120,000 for the session-topper (lot 109), a well-related son of Dark Angel (Ire).

While the day's ceiling was a far cry from the record high of £440,000 achieved in 2019 by the Kingman (GB) colt Admiral Nelson (GB), no one could dispute the vibrancy of a trade that wound up with an average of £39,368, up 8% over last year's overall figure, and a clearance rate of 87%. And although the sale lacked participation from the Maktoum family, in recent years such a driving force at this sale, each of the seven yearlings to break the six-figure barrier fell to seven individual buyers. Crucially, it was also a day that featured spirited participation from a range of trainers and pinhookers.

The session-topping son of Dark Angel (Ire) was one of three purchases made during the day by Dance's Manor House Stud, bidding through its trainer James Horton alongside agent Ed Sackville of SackvilleDonald.

Bred by his vendor Yeomanstown Stud and offered as lot 109, the colt is out of Elusive Beauty (Ire) (Elusive Pimpernel), whose three wins for Ken Condon included the 2017 Listed Eternal S. at Carlisle. Elusive Beauty, a relation to Group 2 winners Little Treasure (Fr) (Night Shift) and Rhythm Of Light (GB) (Beat Hollow {GB}), sold for 185,000gns to Yeomanstown at the end of her career and this colt is her second foal. Her first, a sister to the colt named Angel's Dancing, is in training with John Gosden.

Horton joins Dance in Middleham following a lengthy spell as assistant trainer for Sir Michael Stoute, and was understandably delighted with the purchase.

“It's the first one that we've bought as a team,” he said. “We all loved the horse. John came down on Sunday and we saw a load of horses and everyone liked this colt. He's an exciting horse to go to war with next year.”

Fresh off a week that featured the winners of the GI Del Mar Oaks and GII Gimcrack S. in Going Global (Ire) and Lusail (Ire), Tally-Ho Stud's Mehmas (Ire) was understandably in strong demand throughout the day. Each of the stallion's five yearlings through the ring changed hands, two of them for six figures to contribute to an impressive average of £90,800.

Leading the way was lot 175, a colt from Joe Reid's Shinglis Stud who will be trained by Andrew Balding after selling for £115,000 to Sheikh Abdullah Almalek Alsabah. The colt is the second foal of out a winning mare, Interweave (GB) (Dutch Art {GB}), who hails from the fast Cheveley Park Stud family of champions Soar (GB) (Danzero {Aus}) and Entangle (GB) (Pivotal {GB}).

Speaking on behalf of the new owner, agent Billy Jackson-Stops said: “We loved the horse, he's a lovely physical, and we are very keen on the sire. He seems to really upgrade his mares. He will be the first horse that Andrew trains for the owner–he was very keen to send him a horse.”

Sheikh Abdullah Almalek Alsabah maintains a numerically strong string in Britain, the bulk of whom are in training with Richard Fahey. John Gosden also trains the promising 2-year-old Alotaibi, who won well on debut earlier this month at Newbury.

Archie Watson, meanwhile, will train a Mehmas daughter of the listed-placed Fainleog (Ire) (Rock Of Gibraltar {Ire}) who was bought for £100,000 by Alex Elliott.

Part of a powerful draft from her breeder Tally-Ho Stud, lot 121 is the third foal out of her talented dam, in turn a half-sister to the listed-winning The Reaper (Ire) (Footstepsinthesand {GB}).

“She was the one I really wanted to buy today,” said Elliott. “She looks like an Ascot type of filly and Mehmas needs no introduction–we all know about him. Plus she vetted very well.

One of the great things about her is that if she doesn't quite hit the mark over here, she has good residual to race on overseas. Mehmas is going very well in the U.S.–he had the Del Mar Oaks winner, Going Global, the other night and the likes of Tetragonal and Quattroelle have done well out there too, so that could also be a viable option for her.”

Whitsbury Manor Stud's young sire Havana Grey (GB) received a major vote of confidence with the sale of a well-related colt (lot 120) for £110,000 to Richard Ryan, acting on behalf of owners Teme Valley.

Consignor Guy O'Callaghan of Grangemore Stud paid a relatively inexpensive 36,000gns for the colt out of the draft of his breeder Whitsbury Manor Stud at last year's Tattersalls December Sale, since when his half-brother Ehraz (GB) (Showcasing {GB}) has enhanced the page appreciably as the wide-margin winner of his maiden at Ascot for Richard Hannon. As such, it was no surprise to see Hannon try hard to secure the colt, eventually winding up as underbidder.

The pair are out of Exrating (GB), an unraced Exceed And Excel (Aus) half-sister to high-class sprinter Pearl Secret (GB) (Compton Place {GB}).

“He's for Teme Valley and will be the first one that we have with Clive Cox,” said Ryan. “He looks a proper fit for Clive and he loved him. When people specialise in a certain genre, I think it's foolish not to use that to our advantage and he looks to be the type that Clive excels with. I thought he was a fantastic example of a sharp, strong, 2-year-old type and his half-brother is well regarded.”

Teme Valley hit Grade I heights earlier this month when their State Of Rest (Ire) (Starspangledbanner {Aus}), trained by Joseph O'Brien, made a successful trip to New York to land the G1 Saratoga Derby Invitational Stakes at Saratoga. The outfit also has several smart 2-year-olds to look forward to, notably the Listed Denford S. runner-up Bayside Boy (Ire) (New Bay {GB}), who is campaigned in partnership with Ballylinch Stud, and Claim The Crown (Ire) (Acclamation {GB}), who broke his maiden at Chelmsford City on Sunday.

Having enjoyed a productive buying trip to the Arqana August Sale, Fawzi Nass again made his presence felt in Doncaster yesterday, with agent Oliver St Lawrence going to £105,000 for lot 151, a Havana Gold (GB) colt from Baroda Stud.

St Lawrence outbid pinhooker Mick Murphy of Longways Stables for the colt, who is the first foal out of triple winner Golden Spell (GB) (Al Kazeem {GB}). A talented filly for Johnny Murtagh, Golden Spell filled the frame on seven occasions in stakes company, notably when second in the Listed Polonia and Legacy S.

“We loved him from the first moment we saw him,” said St Lawrence. “I thought he was a great first foal, a strong horse with a bit of Dubawi [sire of Al Kazeem] coming through. He really stood out–I thought it was very interesting how many trainers pulled him out in the walking ring.”

Training plans for the colt will be confirmed at a later date.

Murphy did not come away empty-handed, however, with a busy day consisting of the purchase of four lots worth £198,000. They were led by lot 74, the sole daughter of Kingman (GB) catalogued who cost £100,000.

Bred by Rabbah Bloodstock and sold through Whatton Manor Stud, the filly possesses a deep pedigree as the second foal out of the high-class Daban (Ire) (Acclamation {GB}), who was trained by John Gosden to win the 2017 G3 Nell Gwyn S. and run third in the G1 1000 Guineas. Not only that, Daban was also a good breezer herself, commanding 260,000gns from Blandford Bloodstock at the 2016 Tattersalls Guineas Breeze-Up Sale.

“I remember Daban as a breezer,” he said. “Katie McGivern had her and she was a quick filly. Hopefully this filly will be the same.

“We've had great success with fillies before. We bought Al Raya [winner of the G3 Prix d'Arenberg] out of this sale, and she went on to do well, and then we also had Queen Of Love [Listed winner], a good filly by Kingman. This filly might be a little bit handy but she looks quick, and were she to breeze well, then there would be an upside to her with that pedigree. Time will tell.”

Daban's first foal is a 2-year-old Sea The Stars (Ire) (Cape Cross {Ire}) filly named Nigwa while she also has a filly foal by Frankel (GB) (Galileo {Ire}). The daughter of Acclamation (GB) is a half-sister to Group 3 winner Thikriyaat (Ire) (Alhaarth {Ire}) and from the noted Gerry Oldham family of Mahalia (Ire) (Danehill).

McKeever On The Mark

A busy day for the buying team of Barry and Charlie Hills with McKeever Bloodstock consisted of the purchase of five lots worth £280,000 led by an Acclamation (GB) colt (lot 95) for £100,000.

The colt formed part of a strong draft from Eddie O'Leary's Lynn Lodge Stud, which had paid €82,000 for the youngster as a Goffs November foal. Out of the winning Dubawi (Ire) mare Dukinta (Ire), he is from the further family of Grade II winner Grandeur (Ire) (Verglas {Ire}) and champion Darjina (Fr) (Zamindar).

“He's a traditional Donny type of horse, the type that we come here to buy,” said McKeever. “He's a good, strong colt who looks as though he should be a 2-year-old and by a good sire.”

Hills is also set to take charge of a Kodiac (GB) filly bought through McKeever for £90,000 out of the Tally-Ho Stud draft. A homebred by her vendor, she is a half-sister to the listed-placed Lexington Grace (Ire) (Sir Prancealot {Ire}) and this season's dual-winning 2-year-old Uncs (Ire) (Galileo Gold {GB}).

“She's looks a real sharp filly–a Queen Mary type of filly,” said McKeever. “She's by a great sire and has a great pedigree.”

A good day for Lynn Lodge Stud also included the sale of the aforementioned Showcasing filly (lot 146) for £95,000 to Manor House Stud and lot 23, a homebred son of Starspangledbanner (Aus) for £90,000 to Ross Doyle.

“He'll go to Richard Hannon,” said Doyle of the colt, the first foal out of the listed-placed Beach Wedding (Ire) (Footstepsinthesand {GB}). “He's a typical Donny horse, the type we love to buy, and he's come from a great home. Starspangledbanner is also having a great season, probably his best ever.”

There was also a fine result for Ruth Pitman's Park Wood Stud in the sale of its only yearling catalogued, a Night Of Thunder (Ire) colt (lot 196), for £92,000. Sam Sangster signed for the colt, who was bred by Elaine Chivers out of Kentucky Belle (Ire) (Heliostatic {Ire}), a half-sister to Grade II winner Ramazutti (Honor Grades).