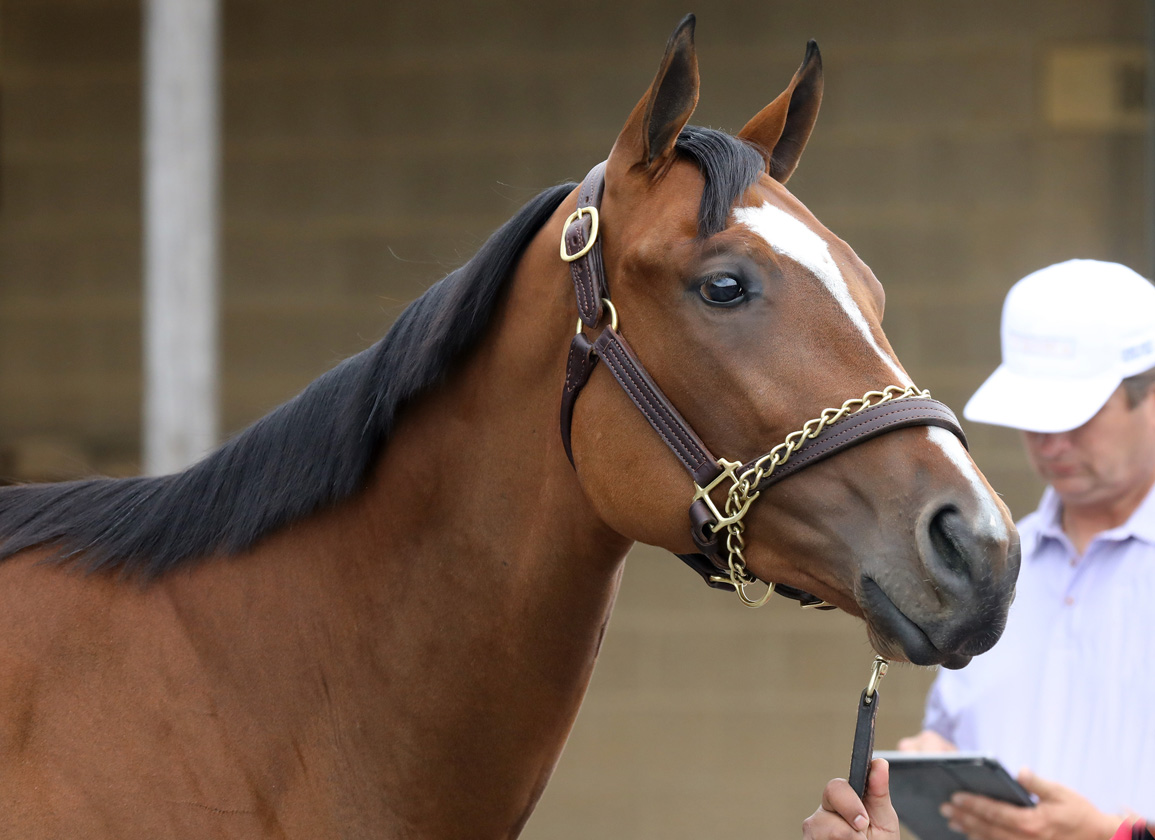 TIMONIUM, MD – After surviving the uncertainties of a pandemic-delayed 2020 renewal, the Fasig-Tipton Midlantic 2-Year-Olds in Training Sale returned to its traditional May slot with a record-setting two days in Timonium. The auction concluded Tuesday with its highest-ever gross, average and median.

“It was huge. It was crazy good,” Midlantic Sales Director Paget Bennett said Tuesday evening. “People wanted horses and they fought to the end to get them. Even in the supplement, we still had a lot of strong results.”

With 69 horses reported not sold, the buy-back for the two-day sale was a sparkling 16.2%.

The auction's co-highest colt in history sold Monday when Terry Finley's West Point Thoroughbreds paid $1.5 million for a son of Quality Road. Vicki and Mike McGowan's Xtreme Racing Stables purchased the top lot of Tuesday's session, going to $625,000 to acquire a daughter of Tapit from the de Meric Sales consignment.

“It was a great market,” Tristan de Meric said. “It's been solid. It seems like it's carried on from the [OBS] April sale. It's good to see some strength in the market at all levels.”

While the juvenile sales muddled through the pandemic-plagued season a year ago, the demand for horses has come roaring back in 2021.

“We really didn't know what to think coming into this year, to be honest,” de Meric said. “We were expecting it to be better than 2020, but we didn't think it was going to be this much better. It's really been an outstanding year.”

“This pavilion has been jam packed,” Toffey said. “I think it's been great. It kind of feels like there is this Covid rebound. People just want to get out. They have been cooped up and if they want to spend their money on a horse, I think it's a good thing.”

Trainer Mac Robertson, bidding on behalf of Vicki and Mike McGowan's Xtreme Racing Stables, purchased a daughter of Tapit out of Grade I winner Gomo (Uncle Mo) (hip 492) for a session-topping $625,000 Tuesday in Timonium. The filly was consigned by De Meric Sales.

“I thought she was the best filly in the sale,” Robertson said after signing the ticket out back. “Mike and Vicki are looking for really good fillies. And I thought she had the best breeze (:10 1/5) and she's out of a Grade I horse by a sire that everybody wants. It made sense to me. We went a little more than we wanted, but the sale is strong.”

Based in Minnesota, the McGowans have been in racing for about six years now. They have been represented on the track by this year's Gazebo S. winner Sir Wellington, who they purchased for $55,000 at last year's Midlantic 2-Year-Olds in Training sale.

“She was a standout from day one,” said Tristan De Meric. “Unfortunately, we didn't get the job done in Miami, but she did everything right here. She even shaved a tick off her time from Miami. She just got better and better.”

Patience Pays off for Brennan

When Niall Brennan brought a son of first-crop sire Practical Joke into the Midlantic sale, he knew the youngster would not be among the fastest horses at the under-tack show, but the Irishman was hoping buyers would see all the potential he saw in the colt. Brennan, who purchased the colt for $85,000 at last year's Keeneland September sale, was rewarded when Spendthrift Farm's Ned Toffey saw off a determined Chuck Zacney to acquire hip 314 for $490,000 Tuesday in Timonium.

“We really loved the sire and when we were looking at the yearling sales, they were popular and they were selling really well,” Brennan said. “But this guy just seemed to fall through the cracks. He was average-sized and maybe just a little bit more of a plainer model, I guess.”

Brennan's team knew the colt would improve over the winter, but they were surprised by just how much he moved forward.

“We thought he would fit the pinhook model really well because we thought he would improve and furnish out nicely,” Brennan said. “And it turned out he grew an awful lot and that's why we had to point him to Maryland.”

The colt worked a furlong during last week's under-tack preview in :10 3/5.

“This horse hasn't had a lot of breezes,” Brennan said. “He only started breezing five or six weeks ago and we brought him along slowly. His breeze here was the first time he was asked to run and he worked in :10 3/5, but he galloped out beautifully. I am glad people looked at that because he's a tremendous horse.”

Hip 314 is out of April Snow (Candy Ride {Arg}), a half-sister to multiple Grade I winner Harmonius (Dynaformer) and to the dam of graded winner Into Chocolate (Into Mischief).

“The sire is pulling him right now, but he has a very nice pedigree and he's a beautiful-moving horse with a great profile,” Brennan said. “We think he has a great future. He's not a 'now' horse and he's a big growthy colt who needed time. Sometimes when you are patient and you give them that time, it pays off.”

Spendthrift's Ned Toffey saw a lot of the colt's grandsire, the farm's super sire Into Mischief, in the youngster.

“Obviously we are familiar with his grandsire,” Toffey said. “He's a big, athletic colt who had a really good breeze. Niall does a great job of not really putting the screws to these horses too much, so we felt like what we were buying, there was still more there. And that's certainly what we hope.”

Of the offspring of the much-hyped first-crop sire Practical Joke, Toffey said, “They do remind me of the Into Mischiefs. He's maybe putting more size on a lot of his. This is a big, strong colt. But they have certainly shown the same ability based on what we're seeing so far. A lot of these are performing really well at the 2-year-old sales, so hopefully that will continue.”

Juveniles by first-crop sire Gormley continued to be popular in the sales ring in Timonium Tuesday with bloodstock agent David Ingordo going to $450,000 to secure a son of the Spendthrift stallion (hip 417). The colt was consigned by Chris Seale's Bird in Hand Stables.

“He is going out to John Sherriffs in California,” Ingordo said. “He will run in some familiar silks.”

“John trained Gormley and we very much like the sire,” Ingordo said. “This colt had class and presence about him the whole time. He was well-prepared by the consignor. He was really the one that I had been waiting around to buy.”

Gormley has already been represented by two winners on the racetrack. His son Headline Report, who sold with Eddie Woods for $550,000 at the OBS March Sale, graduated on debut at Keeneland Apr. 23.

“Gormley was a very good horse,” Ingordo said. “He maybe got lost a little in the shuffle and hype after he went to stud because of Practical Joke and Classic Empire. But he was a very good horse in his own right. We were very fond of him and lucky to support him. The one Eddie Woods sold that is already a winner was a beautiful colt and I'd rate this one as highly as that one. I have high hopes for him.”

“He is carrying on the tradition,” said Spendthrift's Ned Toffey. “The Gormleys have been pretty impressive. We've been hearing great things from breeders right along. They have a lot of style to them. They have that substance that Malibu Moon always threw, but maybe just a little bit more refined. They look like athletes. He is two for three now with his 2-year-olds. So he's off to a great start. We couldn't ask for anything more.”

All Well That Ends Well for Hartley/DeRenzo

For consignors Randy Hartley and Dean DeRenzo, getting their colt by Classic Empire (hip 512) to the sales this spring proved to be an adventure from start to finish, but the story had a happy ending when the dark bay sold for $400,000 to the bid of bloodstock agents Alex Solis and Jason Litt.

“I had him for Miami and he had a little shin, so I had to give him some time and take care of his shins and he lost a couple of months,” Hartley said.

The colt's work during last week's under-tack preview was impeded when the saddle slipped under Susan Montanye.

“He was a little green and then the saddle slipped with Susan,” Hartley said. “I couldn't see from the backside what happened. I could see her standing up, but I really couldn't see until she came around the turn and she was hanging off the side of the horse.”

Despite the mishap, the colt, who Hartley/DeRenzo purchased for $160,000 at last year's Fasig-Tipton Selected Yearling Showcase, completed his furlong drill in :10 2/5.

“He's been my favorite horse all winter and if he had gotten the workout right, who knows,” Hartley said. “He is just a beautiful horse, classy and so smart. He just got here and all of the commotion didn't bother him. He's just a cool horse.”

Hartley continued, “That's the first one they ever bought off us, so hopefully it will be lucky. They got a good buy on the colt, to be honest. Hopefully he can run and they'll be back buying off us again next year.”

Carlos Estrada and Sarah Estrada-Brok are consigning 2-year-olds under the Sterling Thoroughbreds for the first time this year and safe to say the new venture is off to a promising start. The couple sold a colt by Brody's Cause (hip 370), purchased last fall for $6,000, for $290,000 to Larry Zap, as agent for Mike Mellen.

“We bought him out of Fasig-Tipton Kentucky October sale,” Sarah Estrada recalled. “I was at home and my husband said, 'Come look at this horse with me.' I came out and looked at him and I said, 'All right, let's do it.'”

Of what appealed to him about the colt, Carlos Estrada said, “He had great balance with a big walk. I fell in love with him. I said, 'I want to have him.' He RNA'd at the sale and I bought him privately after that.”

“There were a few little baby issues on the X-rays, but we knew it was something we could work with and he would grow out of mostly and he did,” Sarah said of the colt's bargain price last fall. “He was just about squeaky clean here.”

The chestnut colt turned in a furlong work in :10 2/5, but the Estradas were keeping their expectations in check.

“Coming in we were thinking $40,000,” Sarah admitted. “So he beyond exceeded our expectations. The first two days we didn't get much traffic through there. Then after the Preakness, people started showing up and more and more of the right people showed up to look at him. We were excited, but we still weren't thinking almost $300,000.”

The final price was a highwater mark in the young couple's consigning career. Asked what it was like to watch the colt sell, Sarah said, “I think my heart stopped for a minute.”

As for what their future plans are, Sarah said, “Definitely more pinhooking. This was kind of a test this year to see how we did and clearly we did all right. We have five yearlings to sell at the yearling sales and we will see if we can pick one or two yearlings up and take them to the 2-year-old sales.”