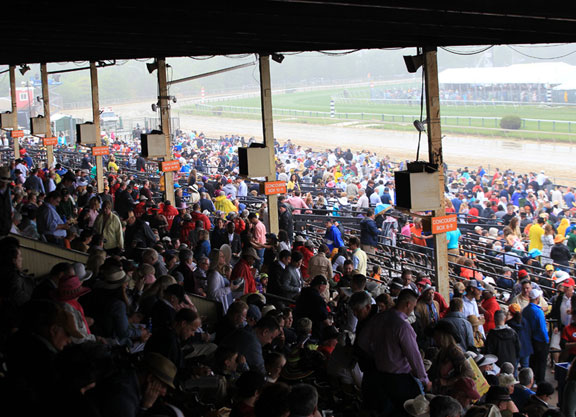 Pimlico on Preakness Day in 2018 | Horsephotos

The City of Baltimore has withdrawn a lawsuit filed earlier this year against The Stronach Group (TSG), owners of Pimlico, which had asked a judge to block any attempts on the company's part to move the GI Preakness S. to Laurel. The suit, filed in March, also requested that the court grant ownership of the track to the city through the process of condemning Pimlico.

According to a press release issued Wednesday by Baltimore Mayor Bernard C. “Jack” Young, the city decided to drop the suit because there have been new discussions between the mayor's office and TSG Chairman Belinda Stronach about finding ways to keep the Preakness at Pimlico. The press release said the two met on Preakness Day and that the parties “discussed the resumption of good faith negotiations concerning the ways and means by which to revitalize, renovate and/or redevelop Pimlico and other Thoroughbred racing facilities in the State, with Pimlico as a priority, in order to maintain and enhance the State's Thoroughbred racing industry, the City's capacity to host the Preakness Stakes, provide for sustainable year-round racing in the State, and to further economic and community development and the public's interest at large.”

The original suit was filed by then-Baltimore Mayor Catherine Pugh, who resigned from office on May 2 over a scandal whereby she allegedly sold children's books she wrote to organizations which were then granted contracts with the city.

TSG has made no secret of its intentions to move the Preakness to Laurel, a track it has invested heavily in to improve the facility. Meanwhile, very little money has been spent on upkeep at Pimlico, which has caused the track to continue to deteriorate. Things had gotten so bad that track officials closed down an area of the grandstand for this year's Preakness that seats nearly 7,000 people, claiming it was not safe because it could not support the weight of so many people.

With TSG wanting to move the race and with the city wanting to keep a sporting event that was a matter of civic pride and a money-producer, the Maryland Stadium Authority came up with a plan to not only rebuild Pimlico but to revitalize the rundown neighborhood that is its home. However, the estimated cost of the plan was $424 million and neither the city nor the Stronach team stepped forward with any concrete plans on who would pay for it.

In the same press release, Belinda Stronach said: “We appreciate the withdrawal of the lawsuit and look forward to working with Mayor Young and his representatives, along with the State and other stakeholders.”

“In the coming days, we will be continuing our dialogue with the City Solicitor's Office to arrange for these important discussions,” said Alan M. Rifkin, attorney for the Maryland Jockey Club and the Preakness Stakes.

TSG has so far committed to keeping the race at Pimlico only through 2020.

Lester Davis, a spokesman for the mayor's office, told the Baltimore Sun that talks between the two sides are expected to begin shortly and “that the mayor's 'baseline' for the talks is that the Preakness continue to be held at Pimlico.”