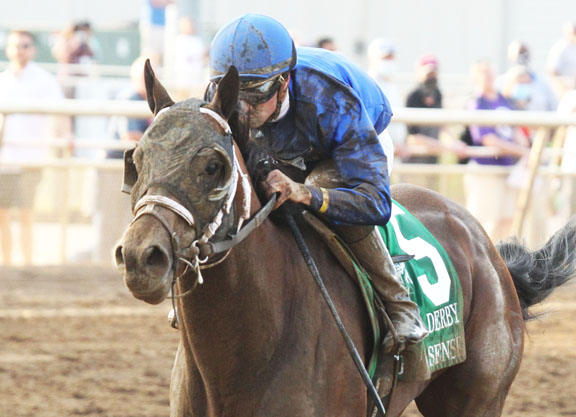 Making his graded stakes debut and looking to give trainer Brad Cox and jockey Florent Geroux a sweep of the evening’s two graded races, Godolphin’s Shared Sense (Street Sense) got a cozy inside trip, tipped out four wide into the stretch and outfinished an unlucky Major Fed (Ghostzapper) to win the GIII Indiana Derby at Indiana Grand.

Last but one early, with only Major Fed behind, Shared Sense took the inside route down the backstretch and made two-path progress into the second turn. Major Fed, consigned to a wide run beneath James Graham, looked to be going better while in about the five path at the point of the bend, but hard-ridden, Shared Sense hit the spot before Major Fed four abreast at the entrance to the stretch. The homebred kicked over to his right lead and pinched a break, leaving a game Major Fed to give game, but futile chase following yet another wide passage. An objection launched by the latter’s jockey James Graham was ultimately disallowed and the result was allowed to stand.

The adjudicated winner of a Nov. 30 Churchill maiden when Blackberry Wine (Oxbow) was disqualified for a drug positive, Shared Sense was a troubled sixth in the Jan. 24 Smarty Jones S. at Oaklawn Park before bouncing back to clear his first allowance condition narrowly in Hot Springs Feb. 29. A never-nearer sixth in a lone grass try in the May 23 War Chant S. at Churchill, he most recently split the GII Toyota Blue Grass-bound Art Collector (Bernardini) and Finnick the Fierce (Dialed In) when pace-compromised in a June 13 allowance in Louisville.

“He’s a tough horse,” said Cox, saddling his first Indiana Derby runner. “This horse, on the dry dirt, that’s where he gets his best races. I tried him on the grass. His physical makeup, how he travels, I thought he might like the grass. He didn’t really go for it. And his last race at Churchill was a really good race. That race didn’t set up at all for him and he ran a big race. He’s just a horse I think will get better with distance and race.”

Bred on the exact same cross as the now-injured and undefeated Maxfield, Shared Sense is the 70th black-type winner for his GI Kentucky Derby-winning sire and his 33rd winner at the graded/group level. He is also the 37th stakes winner and 20th graded winner produced by a daughter of Darley’s Bernardini.

Shared Sense is the first foal from his dam, an unraced daughter of dual Grade I winner Composure (Touch Gold), who was acquired by Sheikh Mohammed’s operation for $3.6 million in foal to A.P. Indy at the 2003 Keeneland November sale. Composure produced six winners, three of which became stakes performers, including Collective’s full-sister Penwith, a Grade II winner and placed in the GI Delaware H. and GI Beldame S. Penwith’s first produce, the 2-year-old fully Carbis Bay (Curlin), is in training at Monmouth Park. Composure was also the dam of GISP Tranquil Manner (A.P. Indy) and MGISP Centring (A.P. Indy).