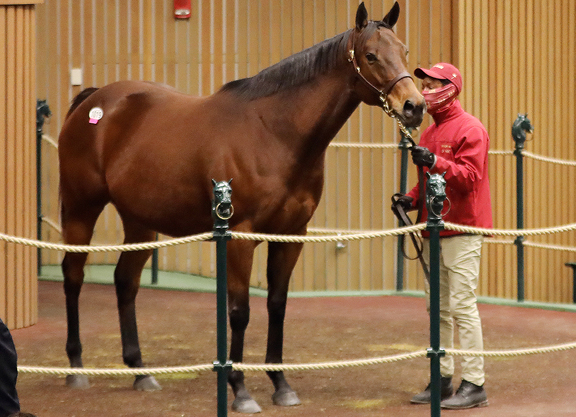 From the Hood | Keeneland photo

The Keeneland January Horses of All Ages Sale continued into its Book 2 section with a measured session of bidding Wednesday. Five broodmares brought six figures during the session, with the 6-year-old From the Hood (Street Sense), a half-sister to champion Folklore (Tiznow), bringing the day's top price of $375,000. The mare was consigned by Taylor Made Sales Agency and Chris Baccari made the winning bid.

A colt by Laoban (hip 1053) was the session's top-priced short yearling when selling to Rascal Bloodstock for $70,000. Bred in Ohio by Mark Toothaker and Gigi Chiandussi, the dark bay colt was consigned by Bill Murphy.

Taylor Made Sales Agency was the session's leading consignor, selling 54 horses for $1,108,800.

“It's typical Book 2 January,” said Taylor Made's Mark Taylor. “You have one walk in there and it's life and death trying to get someone to raise their hand at $1,000. Then you have another walk in that's a good-vetting foal and you'll have 10 people trying to bid and there is a good bit of action. At Book 2 of January, you get a little bit of everything. What I think is very, very apparent is that anything that is in the bottom 20% of the market, nobody that is paying the fees and the bills that it takes in Central Kentucky wants to be operating in that environment. They're fleeing to quality. Here it's about trying to find these horses a good home where they can go on and hopefully be successful in a regional market or elsewhere. That's the lay of the land and that is where we are at right now.”

Baccari agreed the market was all hit or all miss.

“I think it's like anything, if you have something they are looking for, it's very competitive to get them bought,” Baccari said. “If you miss the mark, you miss it completely. But if you are on the mark, you are probably going to be good to go.”

Wednesday's session concluded the dispersal of Spry Family Farm. The day's second-highest offering, Heavenly Sis (Hard Spun), who sold for $180,000 to WinStar Farm, came from the dispersal, which was handled by Hill 'n' Dale Sales Agency. A total of 41 Spry horses sold at the January sale for $1,405,900, led by Sand Hill Stables' purchase of the Maclean's Music yearling colt Mac's Prize (hip 275) Monday for $200,000.

Baccari in the Hood

“The thing with her family, that female pedigree, all of those daughters are reproducing if you look down the list right now,” Baccari said. “All of them are reproducing.”

“Miss Moon just throws really good-looking individuals that can run,” Baccari said. “That's very hard for me, as a person who both races and sells commercially, to find. If I am selling commercially, I have to have mares that are going to throw the quality look that you need with the pedigree behind it. And she has that.”

Baccari continued, “I really want to have the best mares I can get my hands on to bring them back to the farm, so people will know that we raise a good quality horse. And you have to have good mares who can get big results.”

Baccari said mating plans were still undecided on From the Hood, but added, “The best thing about this mare is you can breed her to anything. She has the size, the scope, the strength, she has enough bone. There is nothing really to fix on her.”

From the Hood, bred by Godolphin and a $47,000 Keeneland September yearling purchase in 2016, made just one start for V-Leaf Stables and trainer Michael Tomlinson.

“It's arguably the hottest pedigree going,” said consignor Mark Taylor. “You could have a [Kentucky] Derby winner out of that pedigree and you have Contrail, who is a Japanese equivalent to a Triple Crown winner. The whole page has just exploded. I think it was a fair price. I had her in the $350,000 to $500,000 range. She's a beautiful mare and I think Chris Baccari made a good buy. I think that he's got a good shot to make money in the long run whether he keeps her or turns her over.”