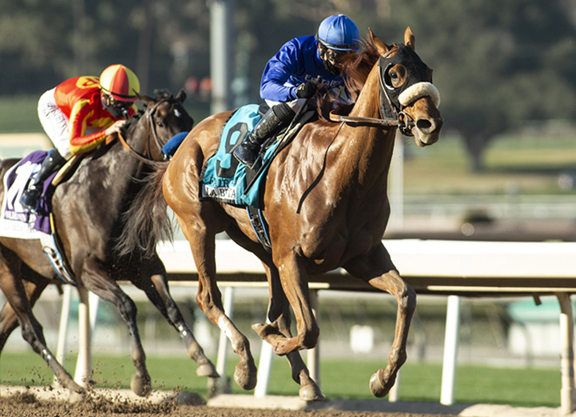 For 14 years, Irishman Eoin Harty worked as the right-hand man to trainer Bob Baffert, helping oversee the careers of the dual Classic-winning duo of Silver Charm (1997) and Real Quiet (1998) among many other luminaries. For the last two decades, Harty has served as an American-based conditioner for Godolphin, having developed the likes of Street Cry (Ire), champion Tempera–whom he trained to a victory in the 2001 GI Breeders' Cup Juvenile Fillies–and Dubai Escapade. Now 58 and a decade removed from his most recent Grade I success, Harty was back in the spotlight following a 20-1 upset by Fair Maiden (Street Boss) in Saturday's GI La Brea S. at Santa Anita. Golden Principal (Constitution) and Merneith (American Pharoah) completed a 2-3 finish for the Baffert barn.

The La Brea field was caught in a nice line and Fair Maiden raced prominently early before drifting back to the latter half of the field as Biddy Duke (Bayern) poked through to take up the running down the backstretch. Ridden quietly by Northern California import Ricky Gonzalez, while racing three or four off the rail in the slipstream of the Chad Brown-trained Motivated Selller (Into Mischief) around the turn, Fair Maiden edged into the four path to follow the move of Golden Principal into the stretch. Pulled out into the clear to lay down her challenge shortly thereafter, Fair Maiden hit high gear at the furlong grounds and raced away to a convincing success. Favored Finite (Munnings) settled well back in the field and made mild late progress into fourth. It was a first Grade I winner for jockey Ricky Gonzalez, who shifted his tack from up north for the winter.

It was the first Grade I for Harty since Victor's Cry, a son of the aforementioned Street Cry, took out the 2010 Shoemaker Mile.

An Arlington maiden romper at second asking last season, Fair Maiden won the grassy Catch a Glimpse S. at Woodbine and was a narrowly beaten third in the GI Natalma S. before finishing well-beaten behind Sharing (Speightstown) in the GI Breeders' Cup Juvenile Fillies Turf. The chestnut resumed to post a 2 1/4-length allowance when trying dirt for the first time in her career at Churchill Sept. 19 and was a troubled fourth to Merneith and Motivated Seller in the Qatar Fort Springs S. on Breeders' Cup Saturday at Keeneland Nov. 7.

Fair Maiden is the seventh Group 1/Grade I winner for her sire and is one of two winners from three to race from her dam, an $875,000 graduate of the 2009 Fasig-Tipton Saratoga sale. Fair Maiden's third dam won the 2000 GI Kentucky Oaks and GI Mother Goose S. before going on to produce MGISP Dunkirk (Unbridled's Song). Shieldmaiden, the 10th daughter of the late Smart Strike to produce a top-level winner, was sold for $30,000 in foal to Animal Kingdom at Keeneland November in 2017 and produced colts by Passion For Action in each of the last two seasons before being covered by the same son of Speightstown last year.