Stradivarius On Top in the Sagaro 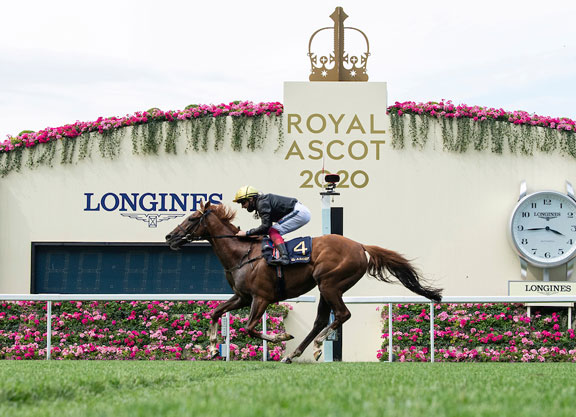 Bjorn Nielsen's triple G1 Gold Cup hero Stradivarius (Ire) (Sea the Stars {Ire}) halted the longest losing streak of his career with a first success in Wednesday's G3 Longines Sagaro S. tackling two miles of his favoured Ascot stomping ground. Backing up another Royal triumph by snaffling a fourth G1 Goodwood Cup in July, the homebred chestnut was edged out by ill-fated G1 Epsom Derby hero Anthony Van Dyck (Ire) (Galileo {Ire}) in ParisLongchamp's G2 Prix Foy in September and was not disgraced when seventh back over the same course and distance in the following month's G1 Prix de l'Arc de Triomphe. He was in unfamiliar territory when suffering a third straight reverse, albeit heavily eased, here in the Oct. 17 G2 British Champions Long Distance Cup and went off as the odds-on favourite to make amends in this seasonal return. Stradivarius was off the tempo racing in an isolated fifth through the initial fractions as upgraded handicapper Stag Horn (GB) (Golden Horn {GB}) set the tone. Angled out wide to launch his challenge off the home turn, the 4-7 pick powered to the front approaching the final furlong and was ridden out to comfortably hold the late thrust of Ocean Wind (GB) (Teofilo {Ire}) by a length. Old foe Nayef Road (Ire) (Galileo {Ire}) stayed on well to finish a half-length adrift in third.

“Mr Nielsen is incredibly sporting and to have a horse like this, who has won three Gold Cups and four Goodwood Cups and a number of other races, has been a dream come true,” said John Gosden. “The old horse has got his enthusiasm still, as you can see, but his last two races were in bottomless ground and bottomless ground and he didn't like either of them. I've been thrilled with him all winter and the people who work around the horse have all been very pleased with him. He ran a great race with poor old Anthony Van Dyck in the Prix Foy on decent ground. It was like a bicycle velodrome race in the Arc, when they trotted then sprinted in heavy ground, and he didn't like it. The ground here was close to unraceable [on Champions Day], so I ruled those two races out. I had every confidence that the enthusiasm was there and Frankie was over the moon with him. He travelled well and didn't give them too much rope. The next thing, he's been given a click and has taken four lengths out of them in half a furlong. He hit the front too soon, but is comfortable over this [two-mile] trip.”

Looking ahead, the Clarehaven trainer was not breaking any embargo when nominating an attempt at a record-equalling fourth Gold Cup and continued, “He's fine and has got the speed, but obviously he likes the Gold Cup distance. I think we'll come straight back here for the Gold Cup as I don't see the point in running him anywhere else in between.”

For Dettori, it was a fifth Sagaro success and the rider added, “These horses are what you get up for. He's been in great form at home and has the same old enthusiasm he has always had. I wanted to be close and didn't want them to get away from me. He has got a turn of foot and, when I asked him to quicken, he got there too soon. Bjorn [Nielsen] was a little worried that he may not have the enthusiasm, but he has always had that and he's shown me no signs that he has lost that. John has been very happy with him all winter and he has the ability to win over shorter trips than the Gold Cup. Yeats won four Gold Cup and people said that would never be done again but, for us, the dream is still alive.”