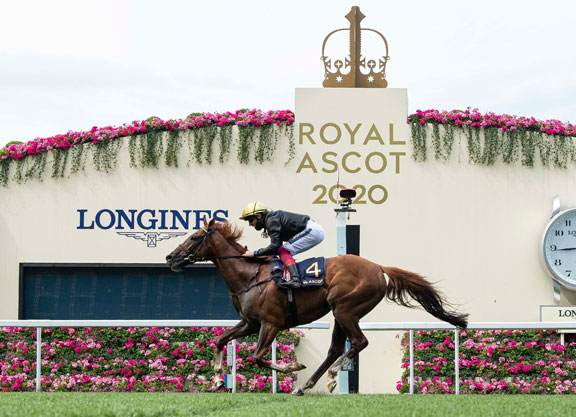 For so long virtually untouchable in the stayers' division, Stradivarius (Ire) (Sea the Stars {Ire}) heads to Tuesday's G1 Al Shaqab Goodwood Cup with a distinct air of vulnerability surrounding him as he attempts a fifth consecutive victory in the prestigious two-miler. Since his emphatic success over Nayef Road (Ire) (Galileo {Ire}) and Santiago (Ire) (Authorized {Ire}), with the latter receiving 15 pounds weight-for-age, in this 12 months ago Bjorn Nielsen's chestnut has had five starts with just a Group 3 win and a second in a Group 2 to show. That may be a harsh reflection of the whole story, as the Gosden stalwart has been examined in a variety of ways that undermine his essential quality but if confidence is an issue for racehorses it must be that his is dented to some degree by now. What happened in his quest for a fourth G1 Gold Cup at Royal Ascot June 17 was in small part tragic, as he was denied the opportunity to employ his deadliest weapon snarled up in slow-moving traffic as Subjectivist (GB) (Teofilo {Ire}) rampaged loose on the front. While that rival is not here this time, his half-brother Sir Ron Priestley (GB) (Australia {GB}) is and there are several others who can stretch him on ground now slower than ideal. Enjoying all the luck for so long, there is a sense that it has turned on the homebred so it will be an epic victory if he can pull it off.

“He didn't have much of a race at Ascot, so that race didn't seem to knock him back too far physically,” John Gosden said. “He's won four Goodwood Cups in a row, which takes some doing. It's going to be a fascinating race, with some very nice horses turning up and you're always going to need some luck in running around Goodwood given it's not exactly a big, open galloping track. Goodwood is quintessentially different–rolling in and out, left, right and has cambers. It should make for an exciting day on Tuesday. He's been a pleasure and a lot of fun to train through the years, but as a 7-year-old full horse, he probably knows a great deal more about the game than I do! It'd be wonderful if he puts in a big performance and runs well or wins, but even to have him there for a fifth time is an achievement for everyone here in itself.”

If the soft ground deteriorates any further, then a proper specialist like Trueshan (Fr) (Planteur {Ire}) comes into the reckoning with his 7 1/2-length defeat of Search For a Song (Ire) (Galileo {Ire}) in Ascot's G2 Qipco British Champions Long Distance Cup in October still fresh in the memory. Second attempting to give Japan (GB) (Galileo {Ire}) five pounds in the G3 Ormonde S. over an extended 13 furlongs at Chester May 6, he was a respectable sixth as top weight in the Northumberland Plate H. over this trip on the Tapeta June 26. “To see Trueshan at his best, it's a case of the more rain the better,” trainer Alan King said. “He looked very good at Ascot on British Champions Day and we've been very pleased with him this year. I was very pleased I ran him at Newcastle in the Northumberland Plate, because you can't keep these horses simmering away forever and he had a proper race there. Everything has gone very smoothly in the build-up since and we'll see what happens.”

Another major threat to Stradivarius is Team Valor and Gary Barber's Spanish Mission (Noble Mission {GB}), who was sixth in this last year but who has emerged in 2021 as a stayer to be reckoned with. Handing Santiago three pounds and a beating in the May 14 G2 Yorkshire Cup over nearly 14 furlongs, he holds Sir Ron Priestley on that form and had Stradivarius behind when third in the Gold Cup. “This has been the plan for a long time and we are really pleased with him–we just wouldn't want too much rain,” trainer Andrew Balding commented. “Stradivarius is a fairly awesome opponent and if he's anywhere near his best he's going to be very tough to beat, but on his Yorkshire Cup win and his Gold Cup third, Spanish Mission ought to be very competitive.”

Below-par in the Yorkshire Cup, Sir Ron Priestley has high-class form at a mile and a half on fast ground this term with his two Newmarket successes in the May 1 G2 Jockey Club S. and the July 8 G2 Princess of Wales's S. coming at the expense of Pyledriver (GB) (Harbour Watch {Ire}) in the former contest and Al Aasy (Ire) (Sea the Stars {Ire}) in the latter. If he needs it that quick, he will be in trouble here over a longer distance in a contest he is unlikely to be able to boss. “I'd have put Subjectivist alongside Attraction and Shamardal as one of the three best I've trained,” trainer Mark Johnston said. “He was one of those rare horses with which you weren't really concerned about the opposition, because he was better than anything out there and I can't obviously say the same about Nayef Road or even Sir Ron Priestley.”

“We agonised over paying £25,000 to supplement Sir Ron Priestley and I had to convince myself I was doing it for the owner, not myself, because there's some uncertainty about the trip,” he added. “In the Yorkshire Cup, it looked very much as if he didn't stay but it's hard to equate that with his St Leger second or his Nottingham win and at the beginning of the year we had no doubt he would stay two miles. Nayef Road's recent runs have been mixed, but in some of them he's shown a glimmer of his best and he deserves to be there on past performance.”

Of Aidan O'Brien's Gold Cup trio of also-rans, Ryan Moore has stayed loyal to last year's G1 Epsom Derby hero Serpentine (Ire) (Galileo {Ire}), who could trade at a huge price given that he returns to a more suitable trip over an undulating track. Eighth in the Gold Cup, the fact remains that he was a 5 1/2-length winner of the blue riband with a remarkable show of strength from the front and if he can get near the lead this time he could be hard to peg back. The fourth of the Coolmore contingent is the Donnacha O'Brien-trained Emperor of the Sun (Ire) (Galileo {Ire}), who was fifth in the Gold Cup and far adrift but who had previously impressed when winning Leopardstown's Listed Saval Beg Levmoss S. over 14 furlongs on rain-eased ground May 14. His 3 1/2-length defeat of Search For a Song there, with Twilight Payment (Ire) (Teofilo {Ire}), Amhran Na Bhfiann (Ire) (Galileo {Ire}) and Master of Reality (Ire) (Frankel {GB}) well beaten, is form that places him close to the top and he remains unexposed over staying trips.

There is a fascinating renewal of the G2 Unibet Lennox S. preceding the feature race, with Godolphin heavy-handed in the seven-furlong contest as last year's winner Space Blues (Ire) (Dubawi {Ire}) returns off a four-month lay-off. Also successful in Deauville's G1 Prix Maurice de Gheest over 6 1/2 furlongs in August and in Riyadh's 1351 Turf Sprint over slightly shorter than this Feb. 20, the 'TDN Rising Star' was a disappointing ninth in the six-furlong G1 Al Quoz Sprint at Meydan Mar. 27 but is back in his comfort zone here. William Buick has stayed loyal to the 5-year-old, leaving James Doyle to pick up the plum ride on the June 19 G3 Jersey S. winner Creative Force (Ire) (Dubawi {Ire}) who was such an eye-catcher when fifth in the G1 July Cup at Newmarket July 10. “It was always the plan to go straight here after Dubai with Space Blues and his preparation has gone well,” Charlie Appleby said. “He ticks all the boxes–it should be lovely ground and we know that he is a seven-furlong specialist who handles the track. He has flopped every time he has run at Meydan and six furlongs seems to catch him out, so you can put a line through his run in the Al Quoz Sprint. We are excited to get him back on track. We are looking forward to stepping Creative Force back up to seven furlongs–it's a sharp seven at Goodwood, which will suit him. The ground was a bit quick for him at Newmarket last time, but should be more to his liking here. He is a very solid horse, who is getting a 3-year-old allowance, and he goes there in great shape.”

Sunday's heavy rain will not have been a welcome sight for Ralph Beckett as he prepares Marc Chan's 'TDN Rising Star' Kinross (GB) (Kingman {GB}) for action, having made his first start since a gelding operation a successful one in the G3 John of Gaunt S. at Haydock May 29. The runner-up Njord (Ire) (Roderic O'Connor {Ire}) has subsequently upheld the form by finishing in the same berth behind Order of Australia (Ire) (Australia {GB}) in the G2 Minstrel S. and provided the ground has not impacted too much on his chances he may have more upside than the three-years-older G2 City of York S. and G2 Solonaway S. scorer Safe Voyage (Ire) (Fast Company {Ire}).

In the G2 Unibet Vintage S., Berkshire Shadow (GB) (Dark Angel {Ire}) steps up in trip having beaten the re-opposing Eldrickjones (Ire) (Cotai Glory {GB}) in Royal Ascot's G2 Coventry S. June 15. “The likelihood is he's going to encounter different ground conditions to what he did at Ascot, which is an unknown, but I'm very happy with the horse and I think the extra furlong will suit him well,” trainer Andrew Balding said. “It was a very good performance in the Coventry and likewise first time out he was very impressive. He's obviously a horse with a huge amount of talent. It was always the intention to step up to seven furlongs after Ascot and I hope if he handles the ground he'll go very well.”

Al Shaqab Racing's Lusail (Ire) (Mehmas {Ire}) has already won over this trip in a smart novice contest at Newmarket June 19 and has subsequently dropped to six to take the G2 July S. also at that venue July 8. He had Eldrickjones back in fifth there and may have the edge over the Coventry runners on that evidence. “Obviously Lusail has been over seven before, so that's a plus for him,” trainer Richard Hannon commented. “He's got a decent draw and if he handles the ground he'll go very close. I hope he'll handle the ground, but you never know until you try.”

Nick Bradley, who runs the syndicate concerned with Eldrickjones, said of their contender, “I'd be hopeful we could at least finish a bit closer to Berkshire Shadow, based on the fact I think we were on a less favoured part of the track than the winner at Ascot. I think the step up to seven furlongs will be a help for us and probably a help for him as well. Lusail is probably the one to beat, in my opinion. But with horses like this, there's only so many races you can go for and I've had this race in mind for some time for our horse.”