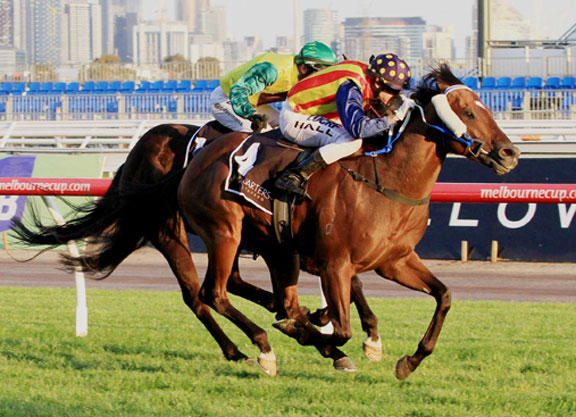 Under The Louvre | Racing and Sports

Saturday's A$1.5 million G1 Stradbroke H. saw veteran galloper Under The Louvre (Aus) (Excellent Art {GB}) record a first Group 1 at the age of five while reversing placings with the May 21 G1 Darley Goodwood S. winner Black Heart Bart (Aus) (Blackfriars {Aus}), who was racing under a penalty for his Goodwood win. Biding his time in midpack, Under The Louvre was forced wide off the turn but quickly began to make up ground down the middle of the track. He hooked up with Black Heart Bart passing the 200 metre mark and those two used the length of the stretch to duke it out. Under The Louvre stuck his head in front passing the 50 metre mark to notch a career high. “I just had a little better run than Black Heart Bart in transit,” winning rider Dwayne Dunn told Racenet. “He beat me in Adelaide and we were able to turn the tables.”

Prior to Saturday's Stradbroke, Under The Louvre had contested Group 1 company four times in his 28 starts, hitting the board on each occasion. The first attempt came in last year's G1 Oakleigh Plate, when he was second by three-quarters of a length to stablemate Shamal Wind (Aus) (Dubawi {Ire}). The bay gave Group 1 company another go two starts later in the Goodwood, finishing third, that time behind Flamberge (Aus) (Exceed and Excel {Aus}). Under The Louvre went winless during a busy spring campaign last year, his four placings in six outings including a third in the G1 Sir Rupert Clarke S. at Caulfield, and he enjoyed an extended rest over the Australian summer, resuming only when third in Caulfield's Listed Bel Esprit S. going 1100 metres Apr. 23. His second in the Goodwood came a month after that, and trainer Robert Smerdon admitted his loss in the Goodwood, hence avoiding a penalty, likely made the difference Saturday.

“If we win in Adelaide, we don't win today,” Smerdon told the media after the race. “[Black Heart Bart] went up in weight and we didn't. If we hadn't met him 2kg better we probably couldn't beat him.”

“He's been such a genuine horse and he's been so competitive at the highest level for a long time,” Smerdon added. “But he's a 1350 metre horse so the 1400 metres was always an ask. Dwayne always had the back of Black Heart Bart and even when he got to him I wasn't sure because I know that 1350 metres is his best go, but he toughed it out and found the line really well.”

Under The Louvre's dam, Barcelona Girl, is a half-sister to G2 Royal Sovereign S. winner Master Happy (Aus) (Magic Albert {Aus}). Under The Louvre is her first foal. She has a winning 2-year-old colt named Barthelona (Aus) (Zoffany {Ire}), a yearling colt by Casino Prince (Aus) and a colt foal by Dream Ahead.