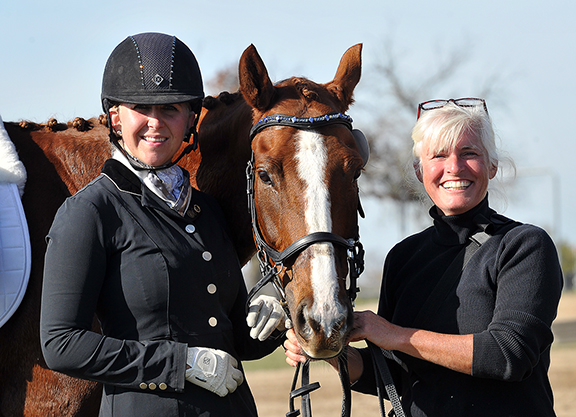 Competition continued Friday at the Retired Racehorse Project Thoroughbred Makeover at Lexington's Kentucky Horse Park, and there was no shortage of notable names, compelling stories and impressive performances, including:

Youmightbearedneck (Lion Tamer)–Not long after beginning his post-race retraining with Michelle Craig, the pair were on their way home from an outing when their truck and trailer were t-boned by another driver. The chestnut gelding suffered a broken jaw which required surgical repair, but was otherwise unscathed. Unable to be ridden with a bit or noseband during his recovery, Craig (with the approval from her veterinarian) continued his training unbridled, and the pair competed Friday in the show jumping division sans bridle, wowing the crowd with their performance.

Dancing Commander (Mr. Trieste)–Owned by racing photographer Wendy Wooley of EquiSport Photos and ridden by Grand Prix dressage rider Emily Brollier Curtis, Dancing Commander raced at Sam Houston, Remington and Will Rogers Downs. Wanting a good post-racing life for her horse, then-owner Vicki Heidlage contacted Brollier-Curtis and asked if she would be willing to take on training of the gelding with a possible goal of competing in the Thoroughbred Makeover. Wooley, who takes lessons from Brollier-Curtis, fell in love with her coach's new training project and purchased him this summer with the agreement that Broiller-Curtis would continue his training and compete with him in the Thoroughbred Makeover.

Carajillo (Medaglia d'Oro)–Bred and owned by Siena Farm and trained by Todd Pletcher, Carajillo's lone win came in a maiden special weight at Monmouth Park in July of last year. Upon retirement, he was offered to Isabela de Sousa, daughter of Hidden Brook Farm's Sergio de Sousa, to train for the Thoroughbred Makeover, which she competed in last year with fellow Siena Farm graduate and Grade II-placed Dewey Square (Bernardini). The pair won their division in Show Jumping and Isabela was the top-placed junior competitor in the Show Hunter division.

Sahara Sunrise (Maimonides)–After running her last race on May 29 of this year at Belterra Park, Sahara Sunrise found her way to Lexington veterinarian and life-long polo player Dr. Walter “Trey” Schott's barn to begin her retraining as a polo pony. She is one of two horses Schott has entered in this year's

Hard to Port (Afleet Alex)–Bred and raced by one of the Thoroughbred Makeover's 2016 sponsors, Juddmonte Farms, Hard to Port posted wins at Churchill Downs and Gulfstream Park before retiring at the end of 2014. He is in training with former Bobby Frankel assistant and exercise rider Nuno Santos.

Santos, who is originally from Portugal and grew up riding classical dressage and show jumpers, returned to his roots in 2010 and started Santos Sport Horses.