'Storm' Rolling in For Jeff Ruby 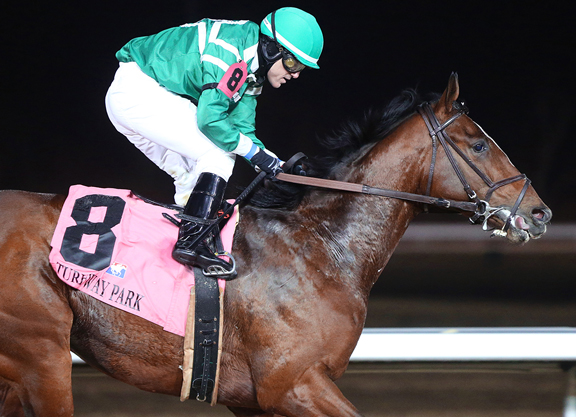 Hush of a Storm | Coady

A field of 11, headed by Joseph Morey Jr.'s Hush of a Storm (Creative Cause), aim to take advantage of the Kentucky Derby points on the line in Saturday's GIII Jeff Ruby Steaks at Turfway Park. Drawing the 2 hole, the William Morey trainee kicked off his career finishing eighth against $150,000 maidens on the dirt at Churchill last November, but rebounded in fine style to win with ease while trying the Tapeta for the first time going a mile a Turfway in December. A narrow winner facing optional claiming company Jan. 6, the New York bred recorded his biggest success to date when winning the 8 1/2-furlong John Battaglia Memorial S. Feb. 26. Aboard for all three wins, Santiago Gonzalez gets the call.

Hoping to turn the tables on Hush of a Storm is Battaglia third Gretzky the Great (Nyquist), the sole Grade I winner in the field.  Campaigned by Gary Barber and Eclipse Thoroughbreds, the Ontario bred was runner up in his career bow over the Woodbine turf last July before graduating in an off-turf test over that track's synthetic surface the following month before eking out a win in the grassy 6 1/2-furlong Soaring Free S. Aug. 23.  Favored for the Sept. 20 GI Summer S., the bay came home an easy 3 1/4-length winner, but failed to carry that form in his seasonal finale, tiring to sixth in the GI Breeders' Cup Juvenile Turf at Keeneland Nov. 6.

“After the Breeders' Cup, Gretzky had some minor ankle surgery and so, we missed some time with him,” said Mark Casse. “I knew if I was going to make a dirt start that I was going to have to race him two or three more times. So, the reason I went to the Battaglia was just simply because it's not as tiring.”

As for his Battaglia performance, Casse added, “He definitely was a little short, unfortunately. We drew the one [hole] and I told the rider, look, I want you to put him into the race. I don't like coming from the one and letting horses run by you and then they go in front of you and next thing you know, you're last. So, we asked him to run away from there. And unfortunately, he caught some pressure from a long shot that kind of ran ahead and was with him for three-quarters-of-a-mile. He put that horse away and then two more came at him, two more that had to be a lot fitter than we were, so I was proud of our horse.”

“I thought he tried and ran hard, staying back,” he concluded. “But more importantly, he's trained very well since then. And I'm excited. I'm very happy we picked up Chris Landeros to ride him. In my opinion, nobody rides Turfway Park like Chris Landeros. So, I think that's a big plus for us.”

While a top rung performance could pave the way to the Kentucky Derby starting gate, Casse indicated Canada's first jewel of the Triple Crown is far more likely for the colt.

“Is the derby a possibility? I wouldn't rule it out,” said Casse. “He would have to give us a tremendous performance though in the Jeff Ruby and then we'd have to come up with a plan on the Derby. But Queen's Plate is definitely in our crosshairs. And with him being a Canadian bred, it's a million dollars and it's such a prestigious race. We've been fortunate enough to win it a couple of times. We'd like to win it again.”

Also exiting the Battaglia, M Racing Group's Like the King (Palace Malice) makes the jump into graded company following a runner-up in the Battaglia. A runaway winner going a mile on the turf at Belterra last September, the Wesley Ward trainee finished third in an off-turf test at Keeneland a month later but found himself back in the winner's circle going a mile at Turfway Dec. 4. Drawing the inside stall this time, the colt will be ridden for the first time by Drayden Van Dyke.