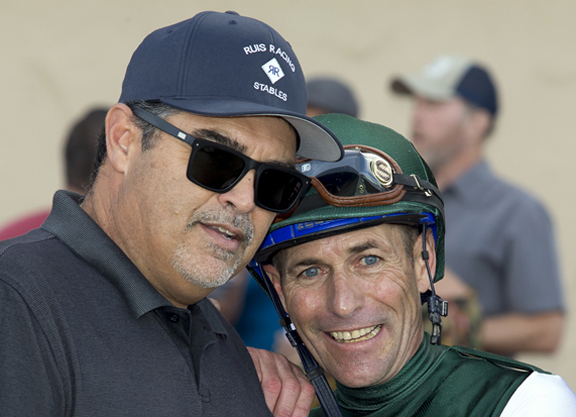 Encouraged by how well he is doing following Dec. 21 hip replacement surgery, Hall of Fame jockey Gary Stevens believes he’ll be back riding in about 10 weeks. However, his latest comeback may be a short lived one as he says he does not think he will ride again after 2017.

Stevens made those statement in this week’s Thoroughbred Daily News podcast.

As for his return to riding, he says he’ll know more in the coming weeks, but doctors have given him a timetable for him to start galloping horses and then to ride in races.

“I’m approaching it the same way I did with my knee [replacement surgery],” he said. “I’m not going to know until I get on a live horse. I’m on a stationary bike right now getting after it and doing a lot of things that a lot of people can’t believe I’m capable of doing so soon. The comparison with the knee replacement…I feel like I’ve had a hang nail removed instead of having a new body part put in. It’s a lot easier surgery. They don’t want me to get on horses for eight weeks [from the time of the surgery]. I could probably be ready at six, but if you have a high impact fall there’s a chance you could spiral and fracture the femur and we don’t want that. They thought the extra two weeks would be just what I need. I think my cardio will be good and I’m looking to be back in 12 weeks [since the surgery]. I feel very positive about it. Yes. I am coming back.”

Stevens has made numerous comebacks in a career that has been plagued by physical issues, particularly knee problems. But he says this will be his last. Now 53, he says that even if he has no further setbacks, he realizes it is probably time to call it a career.

“In all honesty, I think 2017 will be my last year, that is unless I come up with a really good 2-year-old who looks like he’ll be a major contender for the 2018 [GI] Kentucky Derby,” he said. “My riding scares the hell out of my mom and it always has. She has two sons who ride [Stevens’ older brother Scott is a top rider at Turf Paradise]. I’m sitting here now with my wife and my 7-year-old daughter and I’ve got grandkids. To keep riding probably is not fair to any of them. This is one of the riskiest professions there is. I feel very blessed that I’ve been able to bounce back and come back from the injuries and the chronic knee problems. It’s been a great run.”

Stevens said he started experiencing pain in the hip near the start of the primary Del Mar meet, but thought it could be taken care of without major surgery. He went to see the doctor who did his knee replacement because the surgeon wanted to take pictures of his knee for an article set to appear in a medical journal. While there, he asked him to take a look at the hip and it was discovered that the problems were worse that Stevens had imagined and that eventually he would need the hip replaced.

“They took a picture (of his hip) and it had gone to bone on bone. It had completely deteriorated. I said no more needles, we’ve got to replace it,” he said.

With all the success he has had and as much money as he has made during his career, Stevens might seem to have little motivation to keep coming back. But he doesn’t see it that way.

“I’ve said in the past my brother Scott is my idol,” he said. “He’s taught me everything I know and he continues to be my coach. He’s had the best year of his career at age 57. I’m following his footsteps. We have a lot of conversations about this. He says, ‘I love what I do, I’m making great money doing it, I ride what I want to ride.’ Over the past three, four years coming back from retirement I’ve ridden some of the best horses in the world. Beholder (Henny Hughes). I won the [GI] Preakness S. with Oxbow (Awesome Again). I came close in the Kentucky Derby against American Pharoah (Pioneerof the Nile) with Firing Line (Line of David). I have been on a great run. When I am comfortable and can ride without the pain, it’s the best job in the world. I’d rather go out on the racetrack on a Saturday and ride a great horse than be on the golf course, and I’m getting paid to do it. My thinking is, as long as I am an asset and not a hindrance, why not? There are no rules about this. Shoe won his last Derby. Who says I won’t win another Derby?”

Prior to the surgery, Stevens announced that he had reached an agreement to be the stable rider for the growing Ruis Racing stable. He will continue in that role following his return and said there is a distinct possibility he will continue to work for Ruis in some capacity after he stops riding.