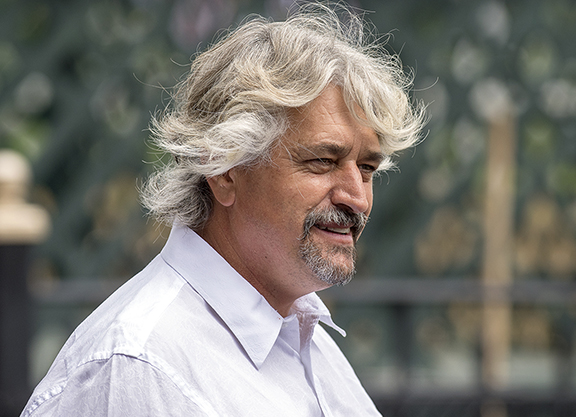 One of the few major races left to win for Hall of Fame trainer Steve Asmussen is the most significant prize in racing, so a win in this year's GI Kentucky Derby would satisfy an ultimate career goal. But if he were to do it with Saturday's GI Arkansas Derby victor Super Stock (Dialed In), a horse with the Asmussen family's fingerprints all over him, it would represent the sentimental success of a lifetime. Wednesday, Asmussen joined the TDN Writers' Room presented by Keeneland to discuss Super Stock, the permanent chip on his shoulder, who he would pick between some of his legendary trainees head to head and more.

Calling in via Zoom as the Green Group Guest of the Week, Asmussen talked about his emotional connection to Super Stock, who is co-owned by his father and was ridden to victory by his oldest son for his first stakes win last summer.

“We've been very fortunate in racing, had many successes, but a circumstance in which you can leg your son up on a stakes winner for your parents is quite unique, to say the least, and is a very special experience,” he said. “I have so many emotions about it. You imagine having that kind of success going into a race, but I did not realize what it actually meant, and the outpouring of love, respect and support since the [Arkansas Derby] for my parents and who they are has been the best part for me. This is my mom and dad's story. They supported us unwaveringly and put me and Cash in the positions we've been in to have success in this business. They're both 79 years old and unique circumstances allowed them to keep this horse. Dad has had Grade I winners in the past, he's just sold them all. That probably would have happened with this horse as well if not for the pandemic. It's brought mom and dad to the forefront and gotten them the respect and admiration that I know they deserve.”

Asked how it would change his life to win a Derby after coming up empty with his first 21 starters, Asmussen said, “I don't know yet, but I'd hate to lose this chip on my shoulder, lose the edge. The next horse that you run is the most important horse. Our motto around here is, 'Everything matters or nothing matters.' So don't lose that chip. We've got to keep it in front of us. We get tremendous opportunities and we respect them and want to make the most of them. Whenever Super Stock won, it was meant to be, so that's what we're looking for going into the Derby. It'll happen, if it's meant to be.”

Elsewhere on the show, the writers reacted to the weekend's big races and handicapped all five participants' chances to win the Writers' Room Derby Chase fantasy 3-year-old contest. In the West Point Thoroughbreds news segment, they lamented yet another slap-on-the-wrist fine for a trainer with a drug positive and lauded Indiana Grand's decision to broadcast video explanations for all of its steward decisions. And, in welcoming new sponsor the Minnesota Racehorse Engagement Project, they talked about TDN's most-read story of the week, which featured trainer Joe Orseno railing against the Lasix ban in stakes races. Click here to watch the podcast; click here for the audio-only version.