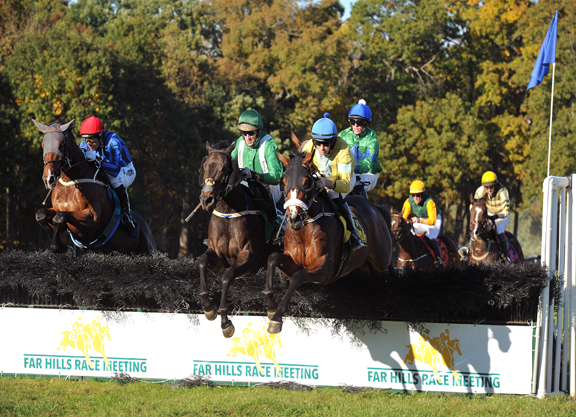 Steeplechasing is an increasingly international sport, and the Far Hills Race Meeting is the principal crossroads where Ireland, the United Kingdom, and Europe meet America.

For evidence of Far Hills' role in steeplechasing's globalism, look no further than the nominations to Far Hills' signature race, the $450,000 GI Grand National. Of the 16 horses nominated to America's richest steeplechase race, eight of them have never started in America, and another has one American start. That one is the Sideways Syndicate's Jury Duty (Ire) (Well Chosen {GB}), who won last year's Grand National for trainer Gordon Elliott.

Of the other seven nominees, only two of them were born in America. So, the question arises: Is this bad, that so few American-bred horses are racing in Far Hills' richest race?

The short answer is no, it's not bad news. In many ways, it's good news for American steeplechasing.

A short answer sometimes requires a longer explanation, and so it is with explaining the intricacies of horse breeding in America and overseas, especially when today's environment has been shaped over the last half-century.

First of all, there's nothing wrong with the American Thoroughbred in steeplechase racing. Overseas horses took the top two spots last year, but two of the top three spots belonged to American-bred horses a year earlier. Mr. Hot Stuff (Tiznow), a Triple Crown competitor in 2009, won for the American-breds, and Jonathan Sheppard-bred All the Way Jose (Senor Swinger) was third, as he was last year.

Buyers in the commercial market demanded speed and precocity, and American breeders delivered what their auction customers wanted. But the result has been fewer starts and a reduced hardiness in the Thoroughbred breed.

Keep in mind that those numbers encompass all horses, including 2-year-olds with light schedules and horses able to make only one or two starts. On a calendar year, the average Thoroughbred started once every six weeks in 1980. Today, the average is once every two months.

A more subjective measure is the time between workouts and races. In 1980, it was commonplace for trainers to give their GI Kentucky Derby starters a final workout on the Thursday morning before the race. That's approximately 65 hours before the Derby.

Today, most trainers would not think of having the workout later than the Sunday before the race. That's 156 hours for the 3-year-old to recover from the workout and to return to top fitness through regular gallops.

One fact that has changed little over the years is the types of races for which these horses are being bred. In 2011, two-thirds of all races in America were run at distances shorter than a mile.

While sprinters can prosper in jump racing, steeplechase races are two miles or more, and the best horses can maintain a high cruising speed and run all day. Dogwood Stable raced champions on the flat and over fences, and the late Dogwood founder Cot Campbell noted repeatedly that not all flat runners are suited to jump racing. In short, it takes a special Thoroughbred to race over fences.

Another factor is North American foal crop. With European and Middle Eastern buyers coming into the market and bidding up any bloodline with the super-sire Northern Dancer in it, the American foal crop ballooned to an unsustainable 51,296 in 1986. This year's foal crop is estimated at 20,800, the smallest since 1966.

Those two factors, the consequences of the commercial breeding market and the declining foal crop, effectively cap the supply of American-bred horses coming into steeplechasing.

A positive factor on the American front is that some prominent flat sires are showing promise as sires of steeplechase horses. For many years, the preeminent jumps stallion was the tough-as-nails Dynaformer, who sired five-time (2003-2007) Grand National winner McDynamo. His place is being taken by stallions such as Tiznow, the sire of Mr. Hot Stuff, and Hard Spun, who counts Foxbrook Champion Hurdle nominee Snap Decision among his progeny.

Another positive factor is the development over the last 20 years of a healthy east-to-west market for steeplechase horses. It's worth noting that Ireland, the U.K., and European countries have parallel breeding programs. One of them is, like the American bloodstock market, aimed at flat racing. It features sires such as super-sire Galileo and rising star Frankel.

Because Ireland and England have winter-long steeplechase seasons, they have a program of stallions and mares directed at what is known as National Hunt racing. The National Hunt market is not huge, but it is considerably larger than the American market.

Consider the number of horses with ratings in the American market and overseas. In the course of a year, fewer than 200 horses have National Steeplechase Association (NSA) ratings. In Ireland and the U.K, the number exceeds 6,000.

Fortunately, American buyers have been willing to shop in foreign markets for horses that will upgrade American racing. Not every National Hunt horse is suited to America, but those who favor firm footing certainly move up when brought to America.

The Grand National provides several examples of how American racing has benefitted from U.S. owners tapping into the overseas markets. In 2011, Irv Naylor purchased Black Jack Blues (Ire) (Definite Article {GB}) in September and won the Grand National with him. The Irish-bred was voted the year's Eclipse Award.

Two years later, Demonstrative (Elusive Quality) capped his 2014 Eclipse season with a Grand National victory. The American-bred had been imported to England, but Jacqueline Ohrstrom and trainer Richard Valentine had repatriated him in 2010, and he was the NSA's 3-year-old champion that year.

Other owners also have been active and successful overseas buyers. Among them is Bruton Street-US, a Maryland-based partnership that races Scorpiancer (Ire) (Scorpion {Ire}), the 2017 Eclipse champion and a Grand National nominee from Jack Fisher's barn.

Other horses arrive in New Jersey with overseas owners and quickly move into American stables. Zanjabeel (GB) (Aussie Rules) easily won the 2017 Foxbrook Champion Hurdle for trainer Elliott, and the 4-year-old immediately was purchased by Rosbrian Farm and Meadow Run Farm. Trained by Ricky Hendriks, Zanjabeel was the 2018 Eclipse champion and is a nominee to this year's Grand National.

The observation is correct; more and more overseas horses are racing at Far Hills and other NSA race meets. It's a positive development as American owners look to the much larger market overseas in search of horses capable of competing successfully in America.

For American steeplechase racing, investment by American owners in an international market is a huge benefit.

Don Clippinger, the National Steeplechase Association's communications director, was editor of the Thoroughbred Record and editorial director of Thoroughbred Times.