'Steaks' Are High at Turfway 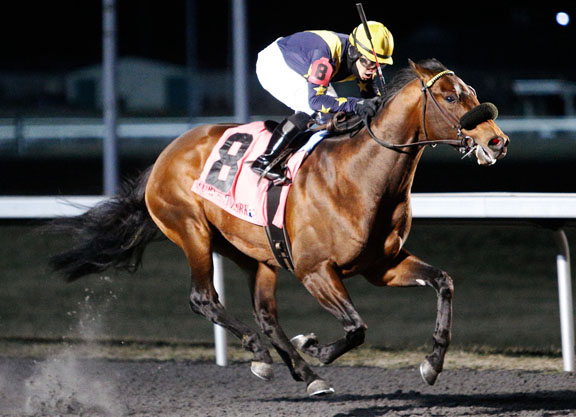 Saturday's GIII Jeff Ruby Steaks is one of just two Kentucky Derby points races in this country to be held over a synthetic racing surface and while only half of the 12 entrants hold nominations to the Triple Crown series, an interesting betting affair looms.

Invader (War Front) figures a lukewarm favorite, as he enters this graded-stakes debut perfect in two tries over the local Polytrack–a towering 12 3/4-length maiden victory going a mile last Dec. 4 followed by a 6 1/4-length success in the John Battaglia Memorial S. Feb. 14. The $500,000 Keeneland September purchase has a pair of five-furlong bullets in the interim and can give trainer Wesley Ward a first victory in this event.

Conversely, trainer Mike Maker has won the Steaks no fewer than five times since 2006 and three of the last four. Three Diamonds Farm's Field Pass (Lemon Drop Kid) has a solid chance to add to that total, having gotten through late to post a neck tally in the Feb. 1 Dania Beach S. over the Gulfstream turf course. Maker will also send out Victory Boulevard (Dialed In), who won his first start for this barn off a $32,000 claim in an Aqueduct starter/optional claimer at Aqueduct Feb. 23; and Fancy Liquor (Lookin At Lucky), who Beyered 82 when taking out a one-mile turf maiden on Gulfstream debut Feb. 2.

The one-eyed Finnick the Fierce (Dialed In) ran with credit in New Orleans this winter, rallying to finish fourth in the GIII Lecomte S. Jan. 18 and an even seventh in a division of the GII Risen Star S. Feb. 15. The chestnut transitions to the synth for the first time, but he tore up the surface when firing a bullet half-mile in :46 3/5 (1/10) Feb. 27, a time that was better than two seconds quicker than the next fastest.