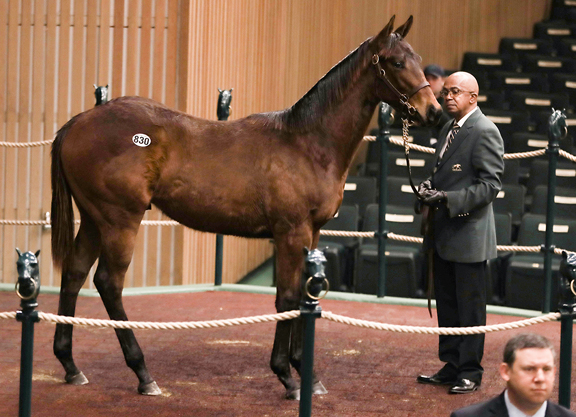 LEXINGTON, KY – The Keeneland January Horses of All Ages Sale continued with a session of steady trade Wednesday and a colt by Uncle Mo causing some early fireworks when selling for $400,000. Gabriel Duignan's Springhouse Farm purchased the pinhooking prospect, who was consigned by Taylor Made Sales Agency on behalf of breeder Mike Abraham. The short yearling was one of seven horses to bring six figures during the auction's third session.

“I thought the market was a little more steady today,” said Taylor Made's Mark Taylor. “I think Monday was kind of up and down. In a sale like this, Book 1 is not a true select sale, you get a really mixed bag of quality. I think it takes a little while for people, especially sellers, to figure out the market and where they need to be with reserves. Our RNA rate ended up being OK for Monday. I think we ended up in the low 20s, but initially, as they all went through the ring, it was in the low 30s. And then we got some sold after the sale and it came down. Today has been much better. Our RNA rate is much lower and I think sellers have figured out where they need to be. They are more realistic and the buyers are responding.”

Doug Arnold, bidding on behalf of an undisclosed client, purchased the day's top-priced mare, going to $240,000 for the racing/broodmare prospect Elle's Town (Speightstown). The 4-year-old filly was consigned by Bluewater Sales as agent for Three Diamond Farms.

Another highlight of Wednesday's session was the announcing debut of Gabby Gaudet, who became the first female to announce at a major Thoroughbred auction in North America when she took over the mic midway through the session.

The Keeneland January sale continues through Friday with sessions beginning daily at 10 a.m.

A colt by Uncle Mo jumped out of the pack early in Wednesday's third session of the Keeneland January sale when selling for $400,000 to Gabriel and Aisling Duignan's Springhouse Farm. The short yearling was purchased as a pinhooking prospect.

“To me he was the nicest foal on the grounds,” Gabriel Duignan said as his wife signed the ticket on hip 830. “Uncle Mo couldn't be any hotter–he's a great sire. It's a lot of money, but he's a real horse. You're always going to have to pay for a horse like him. He was beautiful.”

A late decision to sell the colt in January led to his placement in Book 2 of the five-day auction, according to Abraham.

“He ended up in Book 2 because we didn't have him in the sale and then we decided to put him in,” Abraham explained. “We called, but they wouldn't let him in. We had another horse that was in this book and we said, 'If we take that one out, can we put this one in?' They said yes and that's how he ended up in this book.”

“The mother is in foal to Arrogate for this year,” Abraham said. “Maybe she'll go back to Uncle Mo after this.” @JessMartiniTDN

Elle's Town Another Diamond for Wycoffs

When Jordan Wycoff purchased Elle's Town (Speightstown) (hip 1035) for $77,000 at the Fasig-Tipton Horses of Racing Age Sale last July, the plan was to race the filly with a long-term goal of adding her to his family's Three Diamonds Farm broodmare band. But following a stakes-placing last month, Wycoff and his father Kirk decided to test the market with the 4-year-old and they were rewarded when she sold to Doug Arnold for $240,000 Wednesday at Keeneland.

“She was beautiful,” Jordan Wycoff said of the filly's appeal last summer. “We've always liked Speightstown. We've had a lot of success with Speightstown. And she had all of her conditions. I don't know if we thought she was going to be a stakes horse, but we bought her to go to Saratoga.”

In her first start in the Three Diamonds colors, Elle's Town was a troubled eighth in an August allowance contest. She hit the board in three of four allowance efforts after that outing before finishing second in the Dec. 28 Pago Hop S. last time out.

“She ran in Saratoga and she showed us more than we thought,” Wycoff said. “She had a brutal trip. We figured we needed to get some stakes placing in her–I didn't know we would get it this soon. Ultimately, we wanted to own her as a broodmare, but the market was going to reward us for our purchase, so we put her on the market.”

Of the filly's final price, Wycoff said, “It was a little bit more than we expected. She was a beautiful filly, but this exceeded our expectations for sure.”

The Wycoffs have a solid history of timely investments. At Keeneland last November, Three Diamonds sold the mare Ultimate Cause (Giant's Causeway) for a session-topping $310,000 after claiming the then 6-year-old for $35,000.

“We just like to race,” Wycoff said. “And unfortunately when you like to race, you need to move some horses now and then. We like to race our horses. We've got a lot of bills to pay, so when you have a great result like this, you've got to move them.”

Elle's Town will be heading south to resume her racing career after Arnold signed the ticket on behalf of an undisclosed client Wednesday.

“This guy races at Fair Grounds and Sam Houston,” Arnold said of the client. “He didn't want mostly a broodmare, he wanted mostly a race horse. This filly has a great pedigree, she's a beautiful filly. She seems like she has really good form right now. She barely got beat in the Pago Hop and, with any luck at all, they'll maybe win a few stakes and then have her as a broodmare.”

“We bought him for some clients and we'll either bring him back to sell him or race him,” Litt said. “Constitution is the hot horse and he's a lovely bodied boy. We're excited to have him.”

Of the colt's final price, Litt said, “The Uncle Mo brought $400,000 [earlier in the session], so this was half price. Nice horses bring a lot of money–I'm sure everybody is saying the same thing.”

Tiz Willy is a half-sister to multiple graded stakes winner Win Willy (Monarchos) and multiple graded placed My Arch Enemy (Arch). The 7-year-old mare was bred to Exaggerator in 2019.