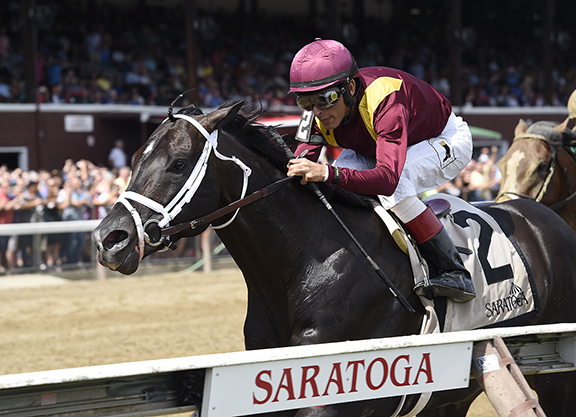 'TDN Rising Star' Coal Front kept his perfect record in tact and became the first graded stakes winner for his second-crop sire (by Bernardini) with this stylish front-running score in his stakes debut.

Sent to the front by Johnny Velazquez from his inside draw, the $575,000 OBSAPR buy held a narrow advantage through opening fractions of :22.37 and :45.90. The dark bay kicked for home in control, opened up a three-length lead in the stretch, and was never seriously threatened by Excitations, who rallied nicely from last of six to complete the exacta.

“We weren't committed to the lead–the thing we were focused on was letting him break and kind of find his rhythm,” winning trainer Todd Pletcher said. “We knew he was fast, but we didn't want to be in a speed duel, but we didn't want to take away what is coming easy to him, either. We kind of left it in Johnny's hands. Johnny said he was very relaxed, really comfortable. A really talented horse.”

Romping by 6 1/2 lengths on debut at Keeneland Apr. 20, Coal Front followed suit with a facile score in a first-level allowance at Belmont June 8. Sol Kumin's Head of Plains Partners privately purchased a piece of the colt from Robert LaPenta following his last victory.

“It's hard to win a race, much less the first three, and he beat a pretty strong group of older horses last time, and then to step up into a graded stakes, it just seems like he's getting better and better,” Pletcher said.

As for what's next, Pletcher added, “We talked about the [GI] Allen Jerkens [Aug. 26], we'll see how he comes out of it. He's a horse with a strong pedigree and enough talent to stretch out, when the time is right.”

Coal Front's unraced dam Miner's Secret, a half-sister to MGSW Woodlander (Forestry), is responsible for a yearling colt by Noble Mission (GB) and foaled a Pioneerof the Nile filly Feb. 28. She was bred back to Triple Crown hero American Pharoah.

Miner's Secret went through the ring twice, bringing $250,000 from Reynolds Bell Jr., agent, at the 2006 KEESEP Yearling Sale and $52,000 from Coal Front's breeder Michael Connelly in foal to War Pass at the 2009 KEENOV sale.