State Of Rest Makes All In The Prince Of Wales's 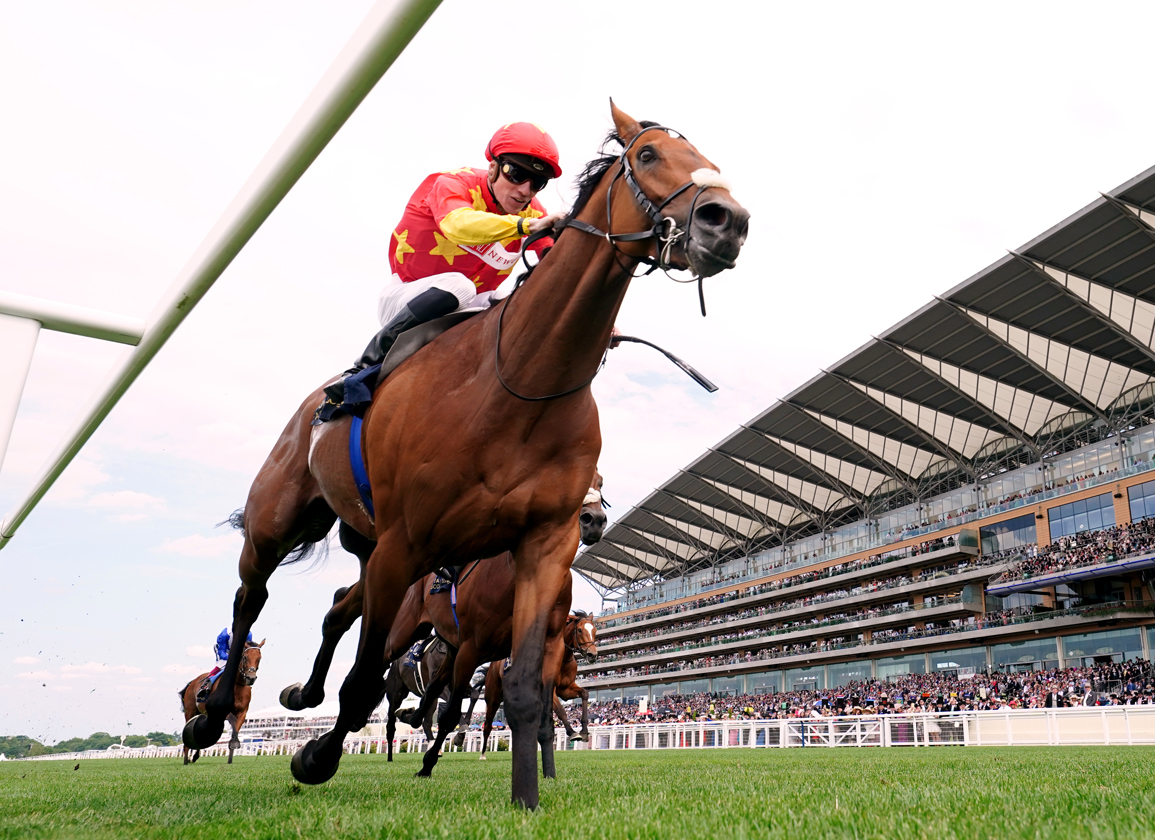 Wednesday's G1 Prince of Wales's S. came down to a display of supreme jockeyship, but it was not Moore or Dettori or even Demuro who provided it but Shane Crosse, whose masterclass from the front on the under-rated State of Rest (Ire) (Starspangledbanner {Aus}) proved the difference in such a tight Royal Ascot encounter. The race is a qualifier for the GI Breeders' Cup Turf at Keeneland in November. While Frankie fumbled with the blindfold on Lord North (Ire) (Dubawi {Ire}) as the gates opened and lost all chance there, Crosse was out and in control quickly on the 5-1 shot with no pressure on the lead. Hard though the 10-11 favourite Bay Bridge (GB) (New Bay {GB}) chased in the straight, from the two pole it was a lost cause with Joseph O'Brien's flagship performer having too much of an advantage. At the line, there was a length between the accomplished G1 Cox Plate, G1 Prix Ganay and GI Saratoga Derby winner and the Stoute runner as they pulled 2 1/4 lengths clear of Grand Glory (GB) (Olympic Glory {Ire}), who justified her supplementary entry. “In the space of the last 12 months, this horse has done a lot. He has done it all and I am just over the moon,” Crosse said. “To get here and participate is a huge thing. To ride a horse like this in top-class races is a dream. You cannot describe it.”

While this renewal showcased the remarkable distance that racing has come since the last century in terms of international competition, there is possibly still a sense that achievements overseas can be overlooked in the Royal Ascot analysis. State of Rest had been at inflated odds before a late gamble thrust him back to 5-1, which was in hindsight an insult given that he had faced the thrust of battle on contrasting surfaces in the States, Australia and France. Having outgunned Anamoe (Aus) (Street Boss) and Verry Elleegant (NZ) (Zed {NZ}) at Moonee Valley in October, State of Rest was probably only in his comfort zone dealing with the French contingent in the Ganay at the start of May and connections felt that his subsequent third three weeks later in The Curragh's G1 Tattersalls Gold Cup could be bettered. Running the final three furlongs there faster than the first and second Alenquer (Fr) (Adlerflug {Ger}) and High Definition (Ire) (Galileo {Ire}), he was always going to be dangerous let loose on the lead.

State of Rest may have clocked a moderate overall time for the race, especially given how the ground has allowed for some rapid outcomes over the first two day, but his finishing effort up the straight was that of a top-class performer and a rematch with the still-promising runner-up will be fascinating to witness. Remarkably, this was Joseph O'Brien's first Royal Ascot winner as a trainer and it is fitting that it arrived 10 years after he won this aboard another Cox Plate hero in So You Think (NZ). “It's very special. It's been a long time coming,” he said. “We've had a lot of horses run well here. It's special to get a winner here and not only a winner, but to win a race like the Prince of Wales's Stakes is hugely special. We have a great team of owners and a special horse.”

“We had a good chat with Shane and decided to make the running. It could not have worked out better. He got the fractions perfect,” he added. “State of Rest is a very tough horse. He is very versatile and I take some of the blame myself for not using him enough last time, but it was a great run. We knew coming here today that we had a live chance of winning the race and I'm just pleased that the horse has proved himself. It is a huge day and I am very proud of everyone. This is what it is all about. We love the game, we are born and bred into the game. It is all we know. To have a big winner here is what we do it for.”

Paul Cashman of Rathbarry Stud, part-owner of the winner, said, “Things did not go to plan in the Tattersalls Gold Cup–the ground was not on our side that day. It was Joseph's plan to go forward. He knew from furlong to furlong what he wanted and that is how it panned out. It doesn't always work like that, but they had the confidence and the horse to do that. Joseph said he was unlucky in the spring of his three-year-old career. He pulled a muscle in the spring and did not have a Guineas campaign, so was a second half of the season horse. So for me he'd been under the radar for a race like this. I thought he should have been half the price he was.”

“It's just a very proud week to be an Australian,” Henry Field told TDN AusNZ on the win. “It was absolutely fantastic. It was a crack-hot field with the top-class middle distances European horses and Japanese horses. It means a lot because he has shown he is the best mile-and-a-quarter horse in the world. It has taken a long time for us to step into this part of the market and find a middle distance horse to stand at stud, but after his Cox Plate win we took a leap of faith and I think that after today's [Wednesday] result that decision has been very much vindicated.

“He's a star horse. He's won Group 1s in America, France, obviously the Cox Plate and now Royal Ascot–that is quite the record. He has got one of the strongest syndicates of owners we have ever put together for a horse and it includes some breeders from New South Wales, Victoria and New Zealand, so it's just a great thrill and many of them are here–it's a day we will never forget.”

“I was actually talking to Chris Waller before the horses came to Ascot and how the week could be a big one for Australia,” Field added. “We have seen the Japanese horses travel round the world and really vindicate the power of their racing. So, to see a horse like Nature Strip (Aus) (Nicconi {Aus}) win the [G1] King's Stand [S.] on Tuesday, and not just win but blow his rivals away, and then our Cox Plate winner, albeit a horse trained in Ireland, prove he is the best mile-and-a-quarter horse in the world, I think all this is very important for Australian racing to showcase to the world how powerful our product is.

“This guy is trained by Joseph, who is a child prodigy and has an extraordinary brain. One of the greatest parts of investing in this horse is being able to pick Joseph's brain over the phone and I don't think I've ever spoken to a smarter younger man in the horse business. But to see both the Australian sprinting and middle-distance form stack up as it has this week, it's a week that Australians should be really proud of and it is really important for the future of our industry. It's just a very proud week to be an Australian. ”

Added Field, “Fingers crossed Artorius (Aus) (Flying Artie {Aus}) can give us something to celebrate on Saturday, but if he doesn't we will all be cheering on Home Affairs (Aus) (I Am Invincible {Aus}) for Coolmore.”

Sir Michael Stoute was far from downcast following the end of Bay Bridge's sequence and said, “The race didn't pan out brilliantly for him, but he ran a very big race and we're absolutely delighted. We haven't run him on fast ground before, but that didn't inconvenience him–there was no problem there. Whether we stick at 10 furlongs or go to 12 furlongs, no decision will be taken for a little while.” Lord North was in a race of his own for much of the contest, left several lengths behind after the blindfold had become caught in the bridle, while the G1 Tokyo Yushun and G1 Dubai Sheema Classic winner Shahryar (Jpn) (Deep Impact {Jpn}) failed to fire on another disappointing day for Japan here. “When I asked to go, he didn't have the same acceleration as last time,” rider Cristian Demuro explained.

State of Rest's unraced dam Repose (Quiet American) is now the property of Juddmonte and their recent acquisition takes on even greater import following this latest confirmation of their unerring shrewdness. Also responsible for the G3 Blue Wind S. winner Tranquil Lady (Ire) (Australia {GB}), she is a daughter of Monaassabaat (Zilzal) who captured the Listed Virginia S. before producing the listed winners Prince Alzain (Street Sense) and Echo River (Irish River {Fr}), with the latter also second in the G3 May Hill S. She is also the second dam of the G2 Royal Lodge S. and G2 Vintage S. runner-up Artigiano (Distorted Humor).

State of Rest will stand at Rathbarry Stud, Ireland and shuttle to Newgate Farm, Australia upon his retirement.

🌍 International star State Of Rest takes the G1 Prince of Wales's Stakes for @JosephOBrien2. What a horse, bred by @TinnakillHouse. pic.twitter.com/5yMOwNmROS