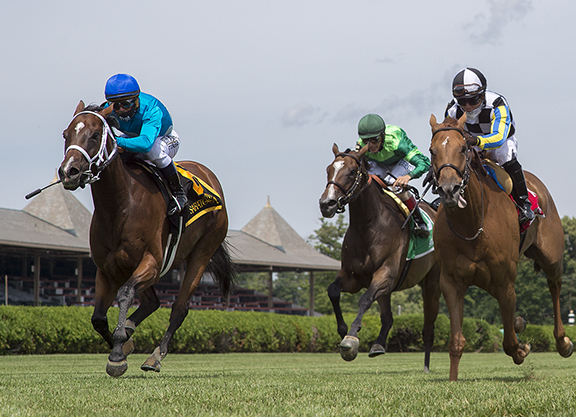 What Starship Jubilee (Indy Wind) may have 'lacked' in class entering a clash with champion Sistercharlie (Ire) (Myboycharlie {Ire}) in Saturday's GII Ballston Spa S. at Saratoga was potentially mitigated by the fact that she was always going to hold a tactical advantage–positionally–given the likely shape of the race. When the dust had settled after 8 1/2 furlongs, the blue-collar Florida-bred took full advantage to cause a minor upset, as Sistercharlie could only finish a one-paced third.

While Thais (Fr) (Rio de la Plata) parlayed pacemaker duties–bar the GI Breeders' Cup Filly & Mare Turf, from which she was scratched–for Sistercharlie into a couple of Grade I placings over the past couple of seasons, the new 'rabbit' was the commonly owned North Broadway (Quality Road). The latter was ridden for speed by Tyler Gaffalione and opened up double digits down the backstretch, but allowed to bowl along by her lonesome, she set only sedate fractions. For her part, Starship Jubilee tossed her head about passing under the wire for the first time, ultimately coalescing and settling third, with Sistercharlie watching her every move just behind her. The swoopers began to whittle away at the deficit rounding the second turn, but while Sistercharlie was first to get going, Starship Jubilee countered with a quick turn of foot of her owne and ranged up three wide looking dangerous off the home corner. Starship Jubilee hooked up with Call Me Love (GB) (Sea The Stars {Ire}) about a furlong from the line and hung for a few strides in the waning stages, but edged clear to score.

“I thought [jockey Javier] Castellano rode her perfectly,” said trainer Kevin Attard, saddling his first graded winner at the Spa. “That horse [North Broadway] opened up and did the job they intended her to do and set the pace up for Sistercharlie. The favorite didn't kick in and the one horse [Call Me Love] kept battling back. It looked like we were safe and home, but the one wouldn't lay down and made it a good fight to the finish.”

Third, beaten a half-length by the Brown-trained and Stephanie Brant-owned Significant Form (Creative Cause), in this event last year, Starship Jubilee earned a breakthrough Grade I in the E.P. Taylor S., but was defeated at 1-2 over ground softer than she prefers in the GIII Cardinal S. at Churchill in November. She was perfect in three Florida starts over the winter, taking the Sunshine Millions Filly & Mare Turf in January, the GIII Suwannee River S. the following month and Tampa's GIII Hillsborough S. when last spotted Mar. 7.

Canada's reigning Horse of the Year, Starship Jubilee is one of eight winners from as many to race from her dam, a daughter of the New York-based Perfect Arc, trained by Angel Penna Jr. to victory in the 1995 GI QE II Challenge Cup at Keeneland and a trio of graded events on this circuit, including Saratoga's GII Diana H. Third dam Podeica was victorious in the G1 Polla de Potrancas in her native Argentina. Also the dam of the MSP Starship Nala, Perfectly Wild is also represented by the 3-year-old Allegedly Perfect (Kantharos), a 4 1/2-length maiden winner on the Gulfstream main track this past May and more recently of an allowance/optional claimer sprinting on the turf. Perfectly Wild was bred to Malibu Moon in each of the last two seasons.