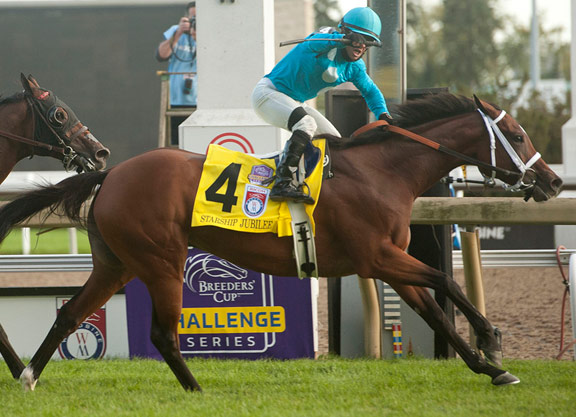 Starship Jubilee (Indy Wind) bested the boys and earned a spot in the gate for the GI Breeders’ Cup Mile with a victory in the GI Ricoh Woodbine Mile Saturday. Settling in fourth off the rail as Admiralty Pier (English Channel) clocked an opening quarter in :23.66, pilot Justin Stein checked Starship Jubilee for a stride, but they maintained their position with War of Will (War Front) running in tandem with her through a :46.14 half-mile. Shadowing the 2019 GI Preakness S. hero’s advance towards the front approaching the far turn, Starship Jubilee split rivals to launch a four-wide bid at the top of the lane. Overtaking War of Will entering the final sixteenth, the 7-year-old mare forged clear to win by a length.

“Just an unbelievable feeling,” said Kevin Attard. “This mare doesn’t get the respect she deserves. She’s a winner of 18 or 19 races out of 38 starts, I was really disappointed to see her at 6-1 on the board… just kind of forgotten about. Time after time, she comes up and proves that she’s a top horse in North America.”

“Sitting inside the three-eighths pole, around the 5/16ths pole I had tons, and I waited for a chance to tip her out and ask her to run,” said Stein. “She’s so honest and wants to win more than anybody else out there. I watched her replays…she’s just gritty. She just waited for her cue and took off like a scalded cat. She was gone.”

Claimed for just $16,000 back in 2017, Starship Jubilee won her first Grade I in last year’s GI E.P. Taylor S. and was second next out in the GIII Cardinal S. over a yielding course at Churchill Downs in November. She opened her 2020 account with four straight victories: the Sunshine Millions F/M Turf Jan. 18, the GIII Suwannee River S. Feb. 8, the GII Hillsborough S. Mar. 7 and the GII Ballston Spa S. July 25. The FL-bred entered off a fourth in the GI Diana S. at Saratoga Aug. 23.

Canada’s reigning Horse of the Year, Starship Jubilee is one of eight winners from as many to race from her dam, a daughter of Grade I winner Perfect Arc. Third dam Podeica was victorious in the G1 Polla de Potrancas in her native Argentina. Also the dam of the MSP Starship Nala, Perfectly Wild is represented by the 3-year- old Allegedly Perfect (Kantharos), who captured a grass allowance two back at Gulfstream in June. Perfectly Wild was bred to Malibu Moon in each of the last two seasons.

This story was posted in Top News and tagged Breeders' Cup Win and You're In, Horse Racing, Starship Jubilee, Woodbine, Woodbine Mile.