Stars on Offer at Fasig-Tipton Monday 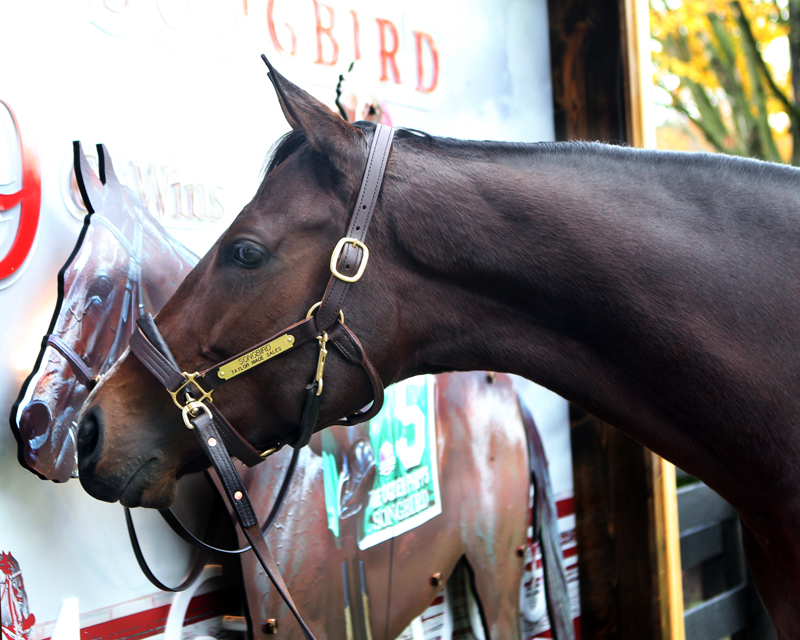 LEXINGTON, KY – The Fasig-Tipton November Sale will offer a glittering array of outstanding racemares and producers, as well as a quality group of weanlings, when selling kicks off Monday afternoon at 4 p.m. at Newtown Paddocks.

“It's a tremendous catalogue and, even more exciting, as I've been on the grounds, is looking at the quality of the horses from a physical perspective,” said Fasig-Tipton President Boyd Browning, Jr. “You can see with some of these top fillies and mares, the conformation matches up with their racing record and the pedigrees. It's a really exceptional group of horses on the grounds. And I am also excited about the quality of weanlings this year. I think it's a really strong group of weanlings that we have on offer.”

After an exciting two days of racing at Del Mar, the industry had a day to catch its breath Sunday before plunging into the bloodstock sales. Browning looks for the excitement of Breeders' Cup championship weekend to carry into Monday's auction.

“There is a demand for quality and when you see quality horses and quality performances, it invigorates everybody,” he said.

“It's an opportunity to buy the best,” Browning said. “I think Songbird is honestly the finest quality offering, in terms of coming off the racetrack, that I've been associated with since I've been at Fasig-Tipton. And that's saying something. Her race record was unbelievable. She's a two-time champion and her pedigree is very, very strong. Her conformation is beautiful. She could literally be a breed-changing broodmare for somebody and change somebody's program completely. The potential is unlimited.”

Browning continued, “And we have horses of the quality of Tepin, who accomplished things that have never been accomplished before. And then you throw in horses like Miss Temple City, who didn't beat the boys just once, she beat the boys twice. You go through the catalogue, there are many, many more that have that potential quality to produce a top-end stallion.”

“The ones that can produce those kind of results are rare, but when you get the one, it's remarkable what they can do for your program.”

A champion at two and three and a nine-time Grade I winner, Songbird (hip 120) is consigned to the November sale by Taylor Made Sales Agency on behalf of Rick Porter's Fox Hill Farm.

“There has been a lot of people coming by to see her and that's been really cool because she means a lot to a lot of people,” Taylor Made's Mark Taylor said of the 'TDN Rising Star' popular champion. “And then all the biggest buyers and breeders in the world are looking at her. So you have really good judges of horseflesh looking at an absolute specimen. And it's very interesting to watch that dynamic happen. And some of the best judges in the world are looking at her and I think they are just scratching their heads and wondering, 'Why didn't we buy her as a yearling?'”

Eclipse champion grass mare of 2015 and 2016, Tepin (hip 130) sells in foal to Curlin with the ELiTE Sales consignment on behalf of Robert Masterson.

“Tepin has done something no filly ever brought to public auction has ever done,” said Elite's Bradley Weisbord. “We might never see something like her again, so we have very high expectations. She looks tremendous and she's in foal to Curlin, who had the one-two in the GI Breeders' Cup Juvenile.”

Tepin's dramatic victory at Royal Ascot in last year's G1 Queen Anne S. is one of several performances on the international scene by American-based runners that will further encourage foreign buyers, according to Weisbord.

“The product is here and there is international demand from the buyers,” Weisbord said. “Tepin helped create that. She went to Royal Ascot–no Lasix–and won. Mind Your Biscuits going to Dubai and winning the G1 Golden Shaheen, Arrogate dominating in the G1 Dubai World Cup. These are medication-free races and international performances that have brought buyers back [to America] to say, 'I want your blood.'”

Miss Temple City (hip 99) defeated the boys in Grade I company last season, annexing both the GI Maker's 46 Mile S. and the GI Shadwell Turf Mile. The 5-year-old mare sells as a broodmare or racing prospect with Select Sales as agent for The Club Racing LLC & Partners.

“Miss Temple City has obviously been a huge draw and she should be,” said Select Sales' Carrie Brogden. “She danced every dance and she is a big, strong powerful thing. Her weanling half-sister (hip 72), who happens to be consigned right across the way from us [at Buckland Sales], is absolutely stunning. So the next generation coming up behind her looks just as good as she does.”

Brogden agreed the excitement from the Breeders' Cup will have a positive carry-over effect into the November sale.

“People are keen,” she said. “We've just watched a lot of top-level racing and I think it makes people excited and they are excited about the next generation.”

The November sale, with a catalogue of 203 head, is scheduled to begin at 4 p.m. The sale opens with an offering of 81 weanlings, including five foals from the first crop of Triple Crown winner American Pharoah. Other first-crop sires with weanlings in the catalogue include Competitive Edge, Tonalist, Palace, Honor Code, Daredevil, Danza, Summer Front, Liam's Map and Karakontie (Jpn).