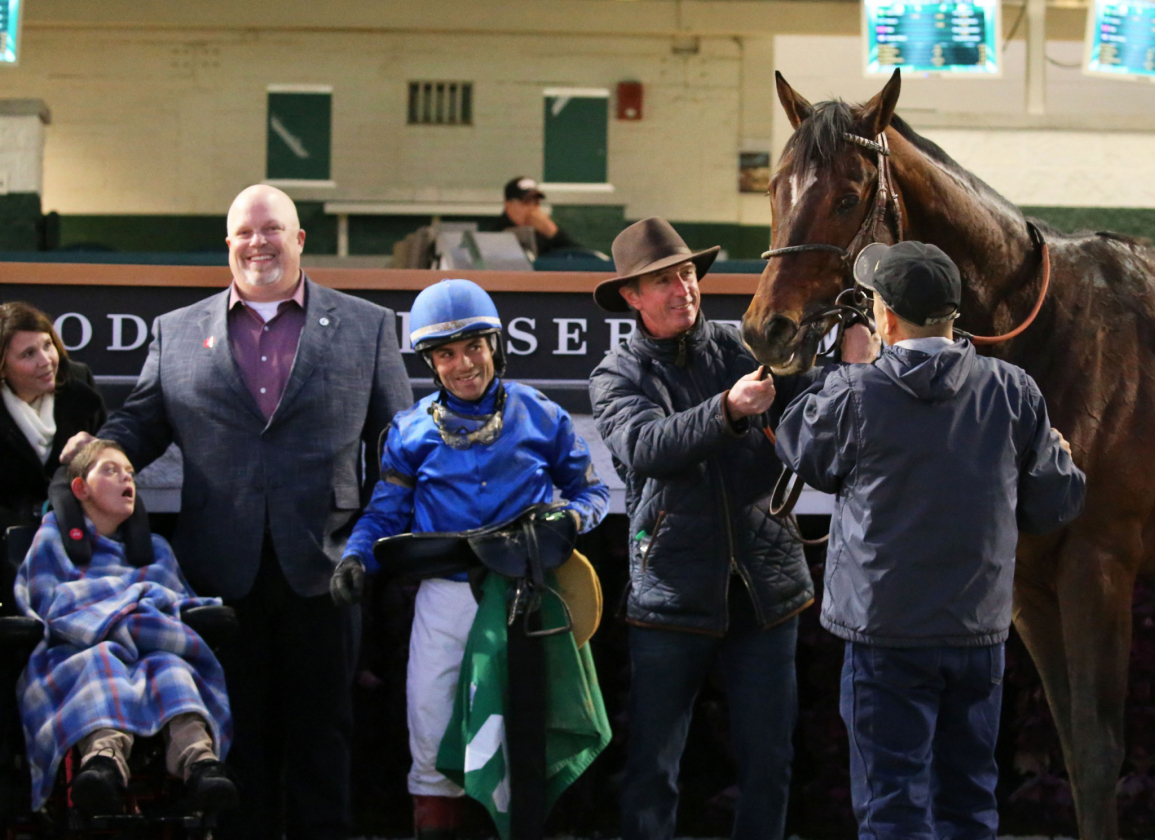 Cody's Wish (Curlin), winner of the GIII Westchester S. in his most recent start, is the morning-line favorite in a field of seven in Monday's Hanshin S. at Churchill Downs. The 4-year-old Bill Mott trainee is a homebred for Godolphin out of 2012 GI Gazelle S. victress Dance Card (Tapit), also the dam of MGSP Endorsed (Medaglia d'Oro).

None of those details really matter much to Cody Dorman, a 16-year-old from Richmond, Kentucky who shares a special bond with the improving son of Curlin. Cody, an avid racing fan ever since Cody's Wish came onto the scene, has been eagerly awaiting the day that his namesake would return to Kentucky so that he can see him in the starting gate once again.

Cody was born with Wolf-Hirschhorn Syndrome, a rare genetic disorder that affects many parts of the body. According to his father Kelly Dorman, Cody experiences frequent seizures and although he is nonverbal, he is able to communicate through a tablet. His father estimates that he has gone through between 40 and 50 surgeries, ranging from relatively minor procedures to open heart surgery.

“He's a fighter, that's for sure,” Kelly Dorman said. “But he's just like any other country boy. He loves being outside and he has always been interested in animals. He really loves fishing.”

When given a wish through the Make-A-Wish Foundation, Cody chose to visit the Bass Pro Shop headquarters in Springfield, Missouri.

It was through the same foundation that Cody first encountered Cody's Wish, who was then just a foal at Gainsborough, when Godolphin hosted Cody and his family at their farm during Keeneland's Make-A-Wish Day in the fall of 2018. 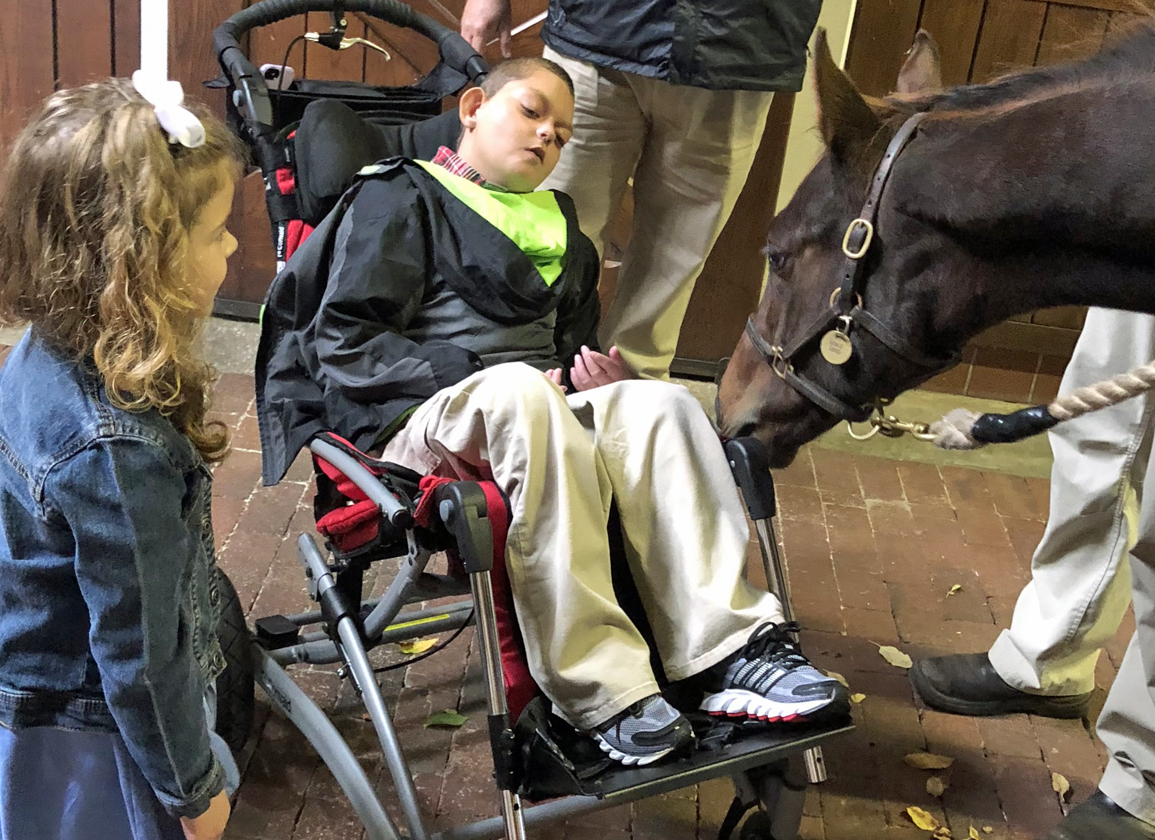 “We knew Cody was in a wheelchair, but we were hopeful that we could get a foal to at least come close to Cody,” he said. “We picked this Curlin colt because at the time he was very laid back. When we pulled the foal out, he just kept inching closer and closer until he had his head in Cody's lap. You could just see Cody's eyes light up.”

“It was one of those magical moments,” Dorman explained. “I looked at Danny and told him that if this horse has half the heart that Cody has, he was going to do some great things.”

Not long after his visit to Gainsborough, Cody went through a serious complication when a blood vessel burst in his stomach. He spent Thanksgiving in the hospital and nearly went into shock, but was able to make it home in time for Christmas. When he visited Santa Claus, Cody asked for money for Christmas so that he could give it to Make-A-Wish. Through several fundraisers, he was able to raise enough money for another child to receive a wish.

The team at Godolphin had kept in touch with the Dorman family since their visit and when it came time to name the bay Curlin colt that Cody had once met, Mary Bourne, the office manager at Gainsborough, came up with Cody's Wish.

Around the time that Cody's Wish turned two, Cody lost his grandfather. Soon after, the pandemic forced the Dorman family to lock down harder and for longer than most.

“Even with everything he's been through, I would never have said that Cody was battling depression until that fall,” Dorman said. “I told my wife that we needed to do something to combat this, so we called Mary and asked about the horse. They hadn't seen each other since the first time they met.”

They arranged a meeting to see Cody's Wish, but were warned that the colt had developed into a high-strung juvenile and that they probably wouldn't be able to get too close. 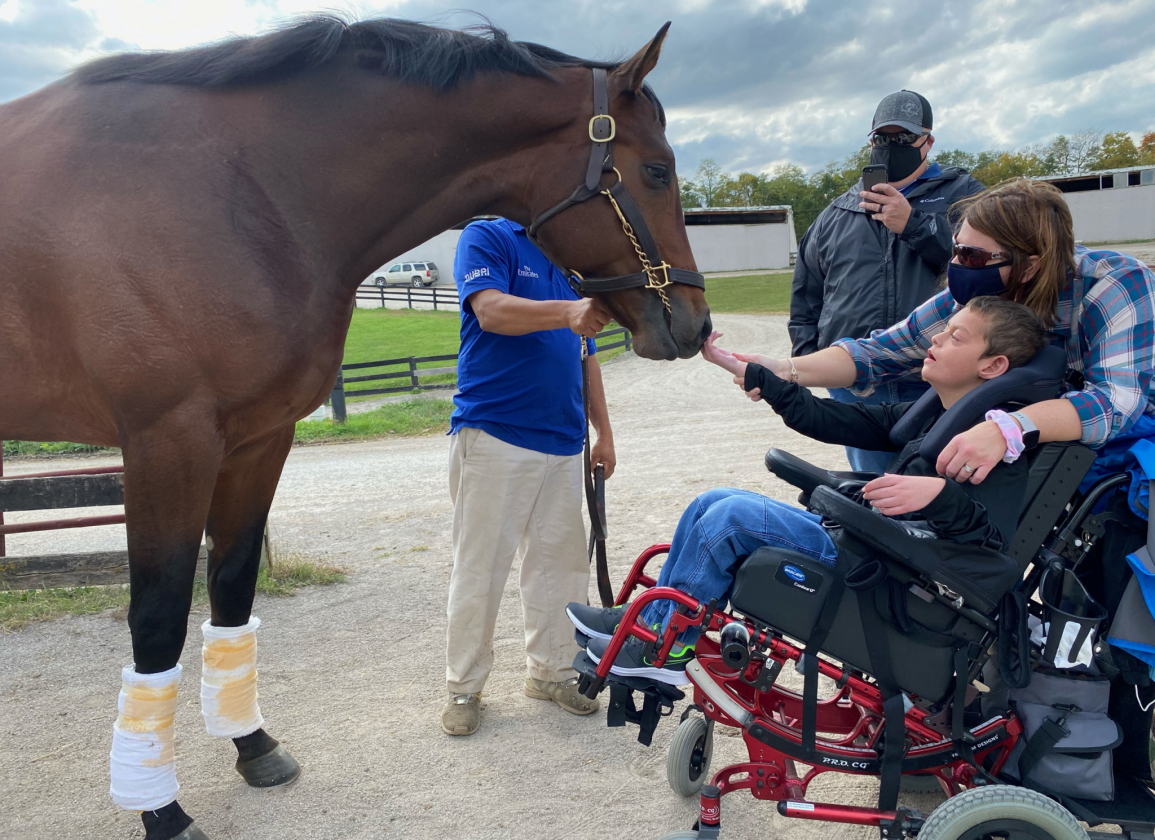 “They brought that horse out of the barn and he took my breath away,” Dorman recalled. “He turned his head and set his eyes on Cody and never took his eyes off him the whole time. He went up to Cody and let him rub his nose. Cody has a few sounds that he makes when he's happy, but I can count on one hand the times I've heard a deep belly laugh from him. As soon as that horse locked onto him, he started doing it. It was like a switch flipped. He was still a little down, but this was the spark he needed to get going.”

Cody's Wish made his debut at Belmont Park in June last year, but had a troubled trip and settled for third. Back in Kentucky, Cody insisted that he needed to be present for the race in order for the horse to make it to the winner's circle. Sure enough, Cody's Wish ran third twice more at Saratoga last summer, but broke his maiden in the fall at Churchill Downs with his namesake looking on.

“It's one of those stories that at every corner, it just seems like it was meant to be,” Mulvihill explained. “It's very hard to question that there is not some form of higher communication there, because Cody has gotten it right every time with where he says that horse will finish. For that first win at Churchill, we couldn't bring Cody into the paddock  but as they walked past, Cody's Wish stopped and locked eyes with Cody.”

As Cody's Wish claimed two allowance races at Churchill Downs that fall, Cody's bedroom began accumulating win photos, saddle towels and racing memorabilia. When it was nearly time for Cody's Wish to head south for the winter, the Dormans planned one last surprise visit to the backside at Churchill Downs as an early birthday present for Cody.

“He went to his therapy session two days before we were going to go, but he wouldn't do anything,” Dorman said. “He was throwing a fit. We got his tablet out and he asked what we were trying to hide from him. He said he didn't like surprises and needed to know if it had to do with his horse. So we finally told him because he wasn't going to do anything until he found out what was going on.”

The team at Bill Mott's barn staged a party on the backside where birthday cake was distributed to all, including to Cody's Wish.

Dorman said that Cody has predicted the outcomes of both of the 4-year-old's races this year. After a sleepless night before the GIII Challenger S. at Tampa Bay, Cody said the colt would run second. Cody's Wish lost by a neck. Cody again foretold the win in the GIII Westchester S.

Godolphin's Director of Bloodstock Michael Banahan said that after the Westchester, the original plan was to send Cody's Wish to the GI Metropolitan H. but a bout of fever two weeks before the race pushed back the timing of his next start. Now, their team is feeling confident going into Monday's Hanshin S.

“He's been training well and we're really happy with him,” Banahan said. “He got in a nice work last Monday in Saratoga. He's undefeated at Churchill going a one-turn mile, so he likes the track there and we're anticipating that he'll be ready to go.”

Cody is also predicting a positive outcome on Monday, when he will once again be in attendance to see Cody's Wish for the first time this year.

“I've always said that those two speak some kind of language that I can't hear or don't understand,” Dorman said. “I just enjoy watching it. Godolphin has been awesome. There aren't words to express our gratitude with the way they've treated us and Churchill Downs has done the same thing.”

Banahan explained that he believes the stars have continued to align as this story plays out.

“When Cody first came out to the farm, Danny could have introduced him to any horse and it happened to be this one,” he said. “For him to turn out to be a good racehorse was special and who knows if there was some divine intervention where we ended up being disappointed in those first three races in New York, but when he went to Churchill the family got to be there when it happened. We're just grateful that we have been able to play a small role in Cody's life and for him to get some joy out of seeing this horse run.”

Mary Bourne, who picked out the name for the colt in the beginning and now attends the races with the Dorman family, said she can hardly control her nerves whenever Cody's Wish steps into the starting gate.

“He has pulled through every time, bless his heart,” she said. “It's so special for Cody's parents to see these moments because they relish them. They don't get that every day. That first race, everyone was in tears–myself, Danny, the assistant trainer–because you see what it means to them when you're there. Nobody gets cheered for more than Cody's Wish when he's coming down the straightaway. We hope this fairytale just keeps going.”