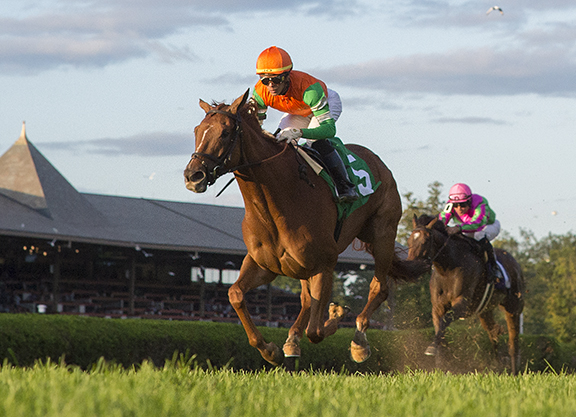 Don Alberto Stable’s Magic Star (Scat Daddy) put it all together late and soared to an impressive debut victory at Saratoga Saturday, becoming the newest ‘TDN Rising Star’ in the final race of the GI Runhappy Travers day card. Jostled at the break, the 3-2 favorite fell well off the pace in the strung-out field as Hidden Facts (The Factor) was clear through fractions of :23.20 and :47.63. Still with plenty to do and buried in traffic as the field turned for home, Magic Star found a seam to run through and, once she saw daylight, she kicked into another gear, bounding to the lead for a resounding 2 1/2-length victory. She was the fifth winner on the card for trainer Chad Brown. Kelleycanrun (Cairo Prince) was second and Macabre (Hard Spun) was third.

Produced by GI Matron S. heroine Meadow Breeze (Meadowlake), Magic Star was a $500,000 KEESEP yearling. Her dam is a half to GISW and young sire Overanalyze (Dixie Union), and had previously produced Royal Copy (Bodemeister), GISP, $138,725. Her unraced 2-year-old Provocation (Into Mischief) was a $350,000 OBS April buy by Speedway Stables. Meadow Breeze produced a Runhappy filly in 2018, but lost her American Pharoah foal earlier this term before being bred back to Uncle Mo.