Star-Studded Line Up at Fasig Sunday 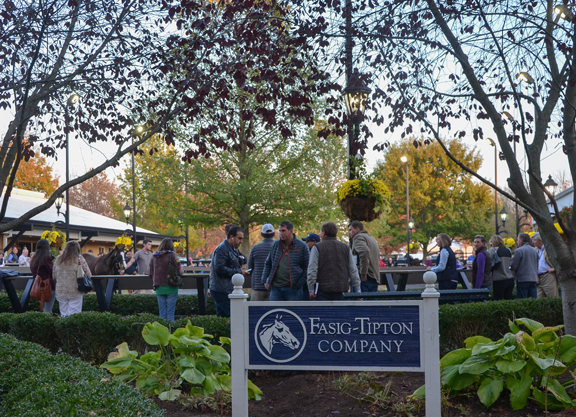 LEXINGTON, KY–Fasig-Tipton's November Sale, known as the “Night of Stars,” will live up to its billing again when it kicks off Sunday at Newtown Paddocks with a sensational line-up of top race mares, broodmares and weanlings.

“We have a tremendous catalogue this year with fillies and mares coming off the racetrack, a tremendous group of in-foal mares and the best group of weanlings we've ever had,” said Fasig-Tipton President Boyd Browning. “We are very, very pleased and enthusiastic about the quality of our 2020 catalogue.”

It was announced late Saturday evening that Flawless (Mr. Greeley), the dam of Saturday's GI Breeders' Cup Classic winner and GI Kentucky Derby winner Authentic (Into Mischief), has been supplemented. Catalogued as Hip 288, she will be consigned by Bridie Harrison, agent for Peter E. Blum Thoroughbreds. Flawless is in foal to Into Mischief on a Feb. 18 cover carrying a full sibling to Authentic. Flawless, a TDN Rising Star, hails from a deep female family of top producers, including Holiday Runner, the dam or granddam of Grade I winners Seventh Street, Reynaldothewizard, and American Gal.

“Flawless is an exciting late addition to our November Sale,” Browning said. “Authentic is just the fourth horse ever to win the Kentucky Derby and Breeders' Cup Classic in the same year, and she is carrying his full sibling. To be able to add a mare of Flawless's qualifications to our sale on the eve of the auction is unprecedented and provides buyers one of the more unique buying opportunities in recent memory.”

The first 159 hips of the 287-head catalogue are weanlings, including nine from the first crop of undefeated Triple Crown hero Justify (Scat Daddy). One of those Justify foals is a half-sister to MGISW sprinter Lord Nelson (Pulpit) (Hip 109). Another weanling likely to prove popular Sunday afternoon is an Into Mischief colt out of MGISP Miss Besilu (Medaglia d'Oro) (Hip 272).

“I think we are going to see quality sells or quality has maintained its market value for the most part at all levels in 2020,” said Browning. “Hopefully every horse we have in the catalogue is quality. We feel very good about the overall prospects coming into the sale, the response pre-sale from buyers, both domestically and internationally, has been very encouraging.”

Japanese and European buyers usually make a strong showing at the November sales. COVID-19 has made travel difficult for international buyers, but thanks to online bidding, virtual inspection videos and travel visas, the international contingent has adapted.

“I think arrangements have been made,” Browning said. “There were already Japanese buyers on the grounds looking at horses and they will participate online. There is traditionally a stronger Japanese participation at the November sales than September because these are the factories they want to buy. There has been a significant number of travel waivers for buyers from Europe.”

Bidding gets underway at 2 p.m. Sunday afternoon at Newtown Paddock