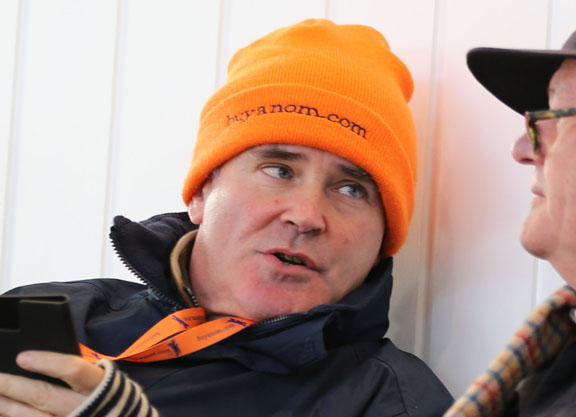 A one-stop shop for stallion nominations? Well maybe it's not quite there yet but, having only launched last autumn during the yearling sales, the stallion nomination trading website buyanom.com has quickly gained a decent following.

A browse through its listing pages this week showed nominations available to Dandy Man (Ire), Dark Angel (Ire), Kodiac (GB), Oasis Dream (GB) and Showcasing (GB) among the more established stallions, and these are just a fraction of the those for sale, with the first-season sires available including crack sprinter Soldier's Call (GB) and Arc winner Waldgeist (GB).

“We've got over 80 individual stallions on the site at the moment and probably double that number in terms of actual nominations,” says Luke Lillingston, who launched the business in Britain and Ireland with partner Ted Voute.

The nominations posted on the site are a combination of those owned by individual share-holders in stallions and some put forward by stallion studs.

“We've had the likes of Shadwell and Cheveley Park listing nominations, as well as some farms in Ireland,” Lillingston adds. “We got the name out there really well and that was a good start. We worked very hard over the year to get to that point and we had launches in England and Ireland and that was all very pleasing. Then from January onwards we had a huge take-up in terms of nomination listings. One of the things that we are really pleased about is that we have had quite a lot of really high-quality nominations on the site, from Siyounis to Invincible Spirits to Dark Angels—some really good stallions and one or those two of those are still available on there.”

Lillingston, a breeder himself who also manages mares for clients at his Mount Coote Stud, recognises that there is still work to be done in encouraging breeders to change their habits. Though internet shopping is hardly a new concept, in the stallion business many transactions are made and deals agreed in person or over the telephone.

He says, “I suppose we are in phase three now and that's trying to persuade people to make offers. We are a new business and it's the internet and we want people to realise that you can actually do business this way. Some smart people are getting some smart business done.”

He also concedes that some smaller breeders have been feeling the pinch as foal crop numbers have started to rise gradually but the number of yearling buyers under the elite bracket has not. “The lower end of the market has got tougher and tougher and we all know it's not just about paying your nomination fee,” he says. “But the point is that everybody who has listed nominations on the site wants to sell a nomination. I'm stating the obvious, I know, but what we are trying to do is to encourage people to look at the site more regularly and see what's available. Then if they see a stallion that's of interest to them they can make offers, and that is the easy way to do business.”

He continues, “In general, there seems to be more activity in Ireland than in England and I think some of the English breeders might be missing a trick. Maybe they've done all their matings, but inevitably you get some who don't decide until after the mare has foaled.

“At this particular juncture, where we've got a couple of months left of the breeding season, people have still got nominations unsold and if they get any kind of a reasonable offer they're likely to look at it very carefully. In two months' time they will have zero value until next year, so it's a great time to make offers.”

Having rolled out buyanom.com first in their native countries, Lillingston and Voute have now set their sights on conquering the U.S. market. The American launch is planned for later this year ahead of the 2021 covering season.

Lillingston adds, “It's been fascinating starting a business like this. We have learnt a lot and we are learning all the time. We have various improvements and additions to the site which we are looking forward to introducing, but for the first year I think we're very pleased with having got a foothold in the business.”